Main / Books / The Secrets We Kept

The Secrets We Kept

Book review and synopsis for The Secrets We Kept by Lara Prescott, A love story about a CIA plot to smuggle Doctor Zhivago into Russia.

The Secrets We Kept is a fictionalized account of the Zhivago Affair, the CIA's "soft propaganda" plot during the Cold War to distribute the book Doctor Zhivago to people in Russia.

Its author, Boris Pasternak, was the most famous living poet in Russia during his lifetime, but his masterwork had been banned due to its anti-Soviet sentiments. While Doctor Zhivago is at heart a love story between its two leading characters, Yuri and Lara, its plot contains elements of criticism of the Red State. By smuggling in and distributing copies of the banned book, the CIA hoped to inspire anger and catalyze dissent among the USSR populace.

The Secrets We Kept mixes an account of the CIA's espionage activities with some romance as well as with the story of Boris Pasternak and his mistress Olga Ivinskaya, who Pasternak modeled the character of Lara after.

The book jumps back and forth from the U.S. to Russian perspectives.

In the U.S., Irina Drozdov gets a job as a typist for the CIA. The CIA knows that her father died while being interrogated by the Russians and hopes that it will inspire loyalty in her, and Irina is made an undercover Carrier of information. She and her CIA handler Teddy Helms pretend to be dating so others don't know, but turn into a real couple.

In Russia, Olga Ivinskaya is sent to prison due to her affair with Boris Pasternak, Russia's most famous living poet who is writing a novel entitled Doctor Zhivago. She is questioned about the book, which they worry is anti-Soviet, and is sent to a re-education camp. She is released a few years later. He completes his book and hands it over to an agent to be published outside Russia, but Olga worries that even that will anger the Soviets.

In the U.S., the CIA is planning a Soviet propaganda operation, with Sally Forester leading and Irina brought in as well. Sally tells Irina about her dream of owning a bookstore. They plan to distribute banned materials to convince the Russian populace that the Red State prevents free thought, setting their sights on Doctor Zhivago.

At the Italian release party for Doctor Zhivago, Sally also finds a business card in her pocket, an invitation to become a double agent. Meanwhile, Irina and Sally's relationship becomes sexual. Sally also suspects Teddy's best friend, Henry, is a mole. When Sally start asking around, Henry rapes her. Another CIA man notices, but does nothing, and Sally feels disillusioned. Sally breaks things off with Irina. Irina breaks things off with Teddy. Soon, Irina is sent to Russia to pick up a copy of Doctor Zhivago. They are bound and distributed to Russian attendees at the World's Fair.

In Russia, Olga's children comment on Boris's unwillingness to marry her. Boris's only concern seems to be getting his book translated into more languages. He wins the Nobel Prize for Doctor Zhivago. However, the Kremlin forces Boris to decline it. The film rights to the book are sold in Hollywood, but in Russia, Boris is denounced and is not allowed to receive mail. After much time, Olga convinces him to write an apology letter to the people.

In the U.S., Sally gives Henry's name to the people on the business card, and they capture Henry. Sally soon approaches them for work. Irina stays with the CIA, but thinks of Sally.

In the end, after Boris's death, Olga is sent to prison again along with her daughter. The film adaptation of Doctor Zhivago is released in 1965. Boris is posthumously re-awarded the Nobel. Many years later, an 89-year-old woman has been arrested for leaking secrets to the Soviets and is awaiting extradition to the United States. It’s Sally. She’d been running a rare books shop for the last fifty years along with an unnamed woman.

The Secrets We Kept is a much-anticipated debut novel from Lara Prescott, mostly because Knopf paid $2 million at auction in order to acquire the rights to publish the novel. It was also selected as Reese Witherspoon’s September 2019 book club pick.

I knew I’d be reading it as soon as I heard about it, mostly because (as I’ve mentioned a bunch of times on this blog) I’ve always been fascinated by Russian history and culture. Add in some espionage and a love story, and it’s a pretty easy sell.

Still of Yuri and Lara from 1965’s Doctor Zhivago

The basic plot of this book will be undeniably appealing to book lovers. The idea that the CIA believed enough in the power of books that they thought their ideas could help to bring down the Soviet government would almost seem like a far-fetched fantasy if it weren’t for the fact that this actually happened.

From the CIA plot to the romantic story line and Olga’s time in prison, the book juggles quite a few things, all of which are interesting narratives in their own right. Prescott does a good job of tying these into a story that feels coherent for the most part.

I appreciated Prescott’s careful recounting of Boris, Olga and their imperfect relationship. For example, in her characterization of Boris Pasternak, she neither demonizes or lionizes him, instead drawing what feels like a realistic portrait of a prideful and often selfish man who wrote a great work of literature. Olga’s story is similarly not entirely satisfying or neat, but history rarely is, and I’m glad Prescott didn’t distort it to present a tidier end for her narrative. To me that’s what’s makes this type of story interesting. We’re left with the reminder that she lives on as Lara (this isn’t a spoiler, we know this from the first chapters), but whether or not that makes her sacrifices worth it is for the reader (or your book club!) to mull over.

As Prescott acknowledges at the end, there are a number of non-fiction books on the Zhivago affair, about Olga and Boris and about other Cold War topics. (The Zhivago Affair and Lara: The Untold Love Story and the Inspiration for Doctor Zhivago are two popular ones.) But to be honest, I probably wouldn’t have even considered glancing at most of them without a gentler introduction to the topic. Instead, The Secrets We Kept presents an accessible and entertaining entryway into a riveting part of history.

Seeing as how I did really enjoy the book, most of my criticisms are about wanting just a little more from it.

I wish that Prescott had given more context to the events of her novel. With the exception of a few scant details, much of the history leading up to or outside the direct realm of the scope of the events is infrequently referenced. Knowing things like how the Zhivago Affair progressed relative to other anti-Soviet CIA activities or having a better sense of the historical context would have amped up the drama in the novel. I felt like I had to rely on a lot of my pre-existing knowledge about the Cold War and post-Revolutionary Russia to fill in the details.

For example, even when it comes to the book in question, Doctor Zhivago, there’s very little that’s discussed about its contents. We know the CIA wants to distribute it, but what about it really spoke to them or to the Russian people is sidestepped. I was surprised at how little I know about the actual novel after reading this whole book.

I guess the flip side of that is that the book doesn’t get bogged down in too many names, dates, government policy changes and other minutiae, but I personally would have preferred a little more minutiae and factual details. I think about how expertly Amor Towles wove in information about the geo-political context of The Gentleman in Mosow, and The Secrets We Kept seems to pale in comparison.

Similarly, when Prescott references many books she used as sources, she highlights one about the persecution of LGBTQ people during the Cold War, The Lavender Scare. However, the actual coverage of that topic in the book feels very light and somewhat surface-level. In general, I just kept feeling like this book was in need of supplemental information.

I also wish that Prescott had included a section discussing the history vs. fiction in this book, similar to the acknowledgements section of The Huntress and other historical fiction books. I would have loved to find out more about some of the direct quotes or colorful details that were pulled directly from historical accounts.

Do you need to have read or watched Doctor Zhivago to read The Secrets We Kept?

Short answer: Nope. Longer Answer: I have a vague memory of seeing the movie a long time ago, and I mostly remembered it as a movie with some very cold Russian people. It didn’t impact my ability to understand or enjoy this book, though I assume people who particularly love the movie or book with get an extra kick out of it.

Even though I was left wanting more from the book, like more historical context or more information on the historical accuracy of the events, overall it was still an enjoyable read about a riveting slice of history.

I think historical fiction fans will enjoy this book. Also, because it’s an accessible and fun read with an intriguing premise, this will be a good general read for book clubs trying to find something to suit the varying tastes of their members.

Read the first pages of The Secrets We Kept

See Everything We Know About the 'The Secrets We Kept' Adaptation 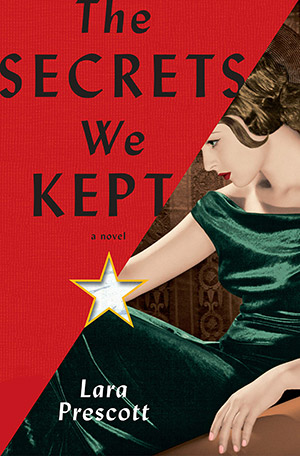 From the Publisher
The Secrets We Kept combines a legendary literary love story--the decades-long affair between Pasternak and his mistress and muse, Olga Ivinskaya, who was sent to the Gulag and inspired Zhivago's heroine, Lara--with a narrative about two women empowered to lead lives of extraordinary intrigue and risk. From Pasternak's country estate outside Moscow to the brutalities of the Gulag, from Washington, D.C. to Paris and Milan, The Secrets We Kept captures a watershed moment in the history of literature--told with soaring emotional intensity and captivating historical detail. And at the center of this unforgettable debut is the powerful belief that a piece of art can change the world.
Show More
Read an Excerpt
See it on Amazon Book Depository