Main / Books / The Possessed: Adventures with Russian Books and the People Who Read Them

The Possessed: Adventures with Russian Books and the People Who Read Them

By Elif Batuman, Something of An Acquired Taste and A Book Only A Russian Lit Scholar Would Write

The Possessed is author Elif Batuman’s recounting of her summer spent studying in Uzbekistan, mixed in with tales of her experiences as a Russian Literature grad student. I picked it up out of the respect I have for classic Russian Literature, which I have a soft spot for since it’s just so desperate and dramatic.

Unsurprisingly, the book reminded me very much of one of my experiences studying Russian Literature, but that’s not really entirely a complement. It sort of is, though. My first English class in college was a higher-level jointly-listed Russian Studies and English comparative literature course called Dostoevsky in English Translation. As a freshman in the business school, I was in completely over my head, and we read massive amounts of Dostoevsky’s works alongside a thick biography of the writer in order to understand his mindset in penning these novels. One of the two professors, Mikhail, had once, as an academic exercise, spent some time living in a broken down hut of a house where Dostoevsky had once lived and done some writing. A clear image sticks in my mind of our professor describing this to us and its horribly dire circumstances in great detail while talking about themes like passion, compassion, love and redemption.

That semester was spent slogging through the course, reading these huge tomes of Dostoyevsky’s late into the night, only to be greeted with a class that I had been grossly unprepared for about the grey, epileptic world of Dostoevsky (who I adore, by the way) and doom and gloom of 19th-century Russia. When I completed the course, with an A no less (but mostly because the professor felt sorry for me, I think), I felt totally invincible.

So that was what this book reminded me of, and you can decide if that’s a complement or not. Elif Batuman is clearly a smart and humorous writer, but it is very Russian in its sensibilities, and it’s very grad student-y. In other words, the book was funny at times (many times, even), but the humor is entirely of the slavic variety — ironic and a little bitter, and the punchline is generally some variety of “man, isn’t this just awful?” Also, the way she tells her story is entirely what you expect from scholars and academics — rambling and littered with curious and esoteric non-sequiturs.

But the book is actually pretty easy to read and is accessible (well, as accessible as literary criticism could possibly be), so I found myself highly entertained…for a while, but eventually had a hard, hard, hard time getting through the last half of the book. There’s no plotline that I could discern other than, hey, I went to Uzbekistan! I did stuff and met people who are also interested in Russian studies! Personally, I don’t have much knowledge of Russian Lit outside the big names and a lot of it was just too specialized knowledge and trivia to keep my interest.

But if you like Russian studies there’s a lot in there about a wide range of Russian writers and a lot about Cryllic languages in general, and Elif is very happy to describe it to you with a touch of sardonic wit. For example, a chunk of the book is about her being paid to write about The House of Ice, a small palace that was built entirely out of ice by a Czarina in Russia. A large portion of that, however, is devoted to describing the many encounters she has with people who dismiss it entirely, do not have any interest in the writers who wrote about it, and say that they’ve never bothered to visit it. And when she goes to visit the site of its reconstruction one last time, she finds out that it’s been demolished early and everyone is sad. So that should give you an idea of the general tone of her writing.

Batuman is an academic, but she knows it and offers no apologies. The book closes with a paraphrasing of Chekov’s “The Black Monk” where scholarship is equated to madness, and it seems that madness and the euporia of it has a distinctively spiritual aspect of it for Batuman, who lovingly embraces it. I’m hesitant to be too critical of this book, because I am sure there are people out there for whom this is exactly the type of thing they would love. But I’m not really one of those people, and pushed myself to finish it more out of principle than actual, you know, desire. I would say that this book is an acquired taste, and good for what it is, but definitely not for most people. 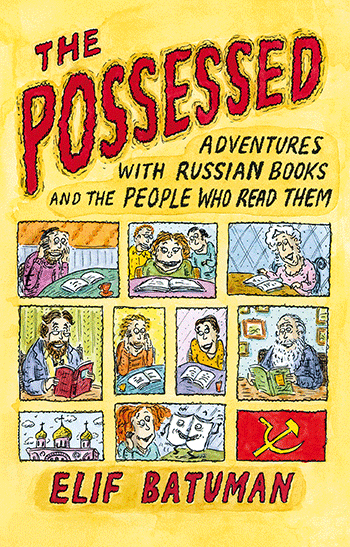 From the Publisher
Love and the novel, the individual in history, the existential plight of the graduate student: all find their place in The Possessed. Literally and metaphorically following the footsteps of her favorite authors, Batuman searches for the answers to the big questions in the details of lived experience, combining fresh readings of the great Russians, from Pushkin to Platonov, with the sad and funny stories of the lives they continue to influence―including her own.
Show More
See it on
Share This
social & email
New Reviews
recent releases
New Posts
recently posted
Discussion and Replies