Main / Books / A Gentleman in Moscow

A Gentleman in Moscow

Book review and synopsis for A Gentleman in Moscow by Amor Towles, a charming novel about a man under house arrest in Moscow's Metropol Hotel after the Russian Revolution.

A Gentleman in Moscow is a fictional story about a Russian aristocrat, Count Alexander Rostov, who narrowly escapes execution during the Russian Revolution. A poem he wrote in University made him an early revolutionary hero so his life is spared, but he is sentenced to house arrest at the famed Metropol Hotel in Moscow. He is confined within the walls of the Metropol while the world outside changes.

With humor, energy and charm, the book follows the Count's life at the Metropol as he tries to eke out an existence and make sense of his circumstances.

(By the way, the trailer for A Gentleman in Moscow from Viking Books is really well done and nicely illustrated. I highly recommend checking it out. It provides an illustrated primer about the basic plot of the book.)

The Prologue introduces Count Alexander Ilyich Rostov, a Count who became a revolutionary hero due to a poem he wrote. On June 21, 1922, after the Russian Revolution, Rostov manages to avoid a death sentence due to his status as a revolutionary hero, but his noble birth means he is still sentenced to house arrest at the Metropol Hotel, where he has been living for many years.

In Book One, Rostov begins his house arrest and moves into a humble, small room at the Metropol. Rostov meets Nina, who is a long-term guest of the hotel. Nina is 9. Nina teaches Rostov about the inner workings of the hotel and eventually gives him a passkey for the hotel. Rostov also meets the Bishop, a waiter who Rostov dislikes because he's bad at his job.

In Book Two, Rostov meets up with Mishka, his old friend, who is romancing a woman named Katerina. Rostov also meets Anna Urbanova, an actress who Rostov makes love to. The Bishop gets promoted and continues to be a thorn in Rostov's side. As the years pass, Rostov becomes depressed and decides to kill himself. Nina is also now 13 and will be leaving the Metropol soon. However, the night of Rostov's planned suicide, Rostov comes across Abram, the hotel handyman, and they chat the rest of night, so he doesn't go through with it.

In Book Three, it's now 1930. Rostov, who has very discerning tastes, has been helping out at the restaurant (The Boyarsky) with Emile (head chef) and Andrey (maître d'). They call themselves the Triumvirate and meet daily to plan out the restaurant's activities. Anna and Rostov begin seeing each other on and off. Rostov also befriends Osip, a Soviet official who wants Rostov to teach him the ways of the privileged classes.

Nina comes to visit. When she returns years later, she has a young daughter Sofia, but her husband has been arrested and sent to Siberia. She asks Rostov to watch Sofia temporarily, but Nina never returns. Rostov and the rest of the hotel staff help to raise Nina. When Nina is 13, she falls down the stairs playing a game with Rostov and he finally leaves the Metropol to rush her to the hospital. Osip arranges for Rostov to return discreetly to the hotel. Meanwhile, Mishka gets sent to a labor camp in Siberia. When he gets out he is weak, and he (a former revolutionary) is critical of the revolution.

In Book Four, Sofia is now 17 and plays piano very well. Her piano teacher is a man named Viktor. Rostov also meets Katerina, who informs him that Mishka has died. Rostov admits to her that Mishka was the one who wrote the poem that made Rostov famous. Katerina leaves Rostov with Mishka's last project, a subversive book of quotes about the famine in Russia.

In Book Five, Sofia is headed to Paris soon for a piano perforance. Rostov has been planning escape. Rostov asks a man to deliver a letter to Richard, an American who once approached him to ask him to be a spy (Rostov refused, but befriended Richard). Rostov oversees an important dinner at the hotel, analyzing how the men are seated to understand the power dynamics in the room. Before Sofia leaves, Rostov gives her a map.

Through a carefully executed plan, Rostov is able to lock the Bishop in a storage room in the basement. Meanwhile, in Paris, Sofia finishes her performance and uses the map to find Richard's house. She gives Richard a package with the seating arrangement information that Rostov collected (e.g. valuable intelligence about the Russian power dynamics). In exchange, Richard orders barrage of phone calls to be placed to the Metropol, causing a fracas that allows Rostov to escape.

In the Afterword, we learn that Viktor and Rostov met up after the escape. The men are dressed similarly, and Viktor boards a train that serves as a diversion. Rostov returns to his home. His mansion was burned down, but he enters a nearby tavern where a woman is waiting for him (described as "willowy", which implies it's Anna).

A Gentleman in Moscow by Amor Towles is a delightful novel that somehow completely slipped past me when it came out a few years back. I later saw it around, but assumed it was a biography and ignored it.

Eventually it popped back up on my radar, and I’ve been reading it on and off for the past few months. This past weekend, I finally sat down to polish it off.

A Gentleman in Moscow takes place on a backdrop of rapid change going on as a result of the Russian Revolution which toppled the monarchy and well as all other aristocratic classes in Russia. With the Bolsheviks at the helm, the once-revolutionary powers were forced to figure out how to channel their insurgent ideas into trying to create a stable government. The result was decades of famine, violence, censorship and destruction.

Stuck in the hotel, Rostov sees as people come and go out of his life, and it’s through this lens that the changes in Russia are refracted throughout the book. A lot of the changes are subtle, in the styling of facial hair or shifts in viewpoints or demeanor. A careful reader will get a lot more out of this book than someone who wants to rush through it to cross it off their list.

The book is structured a bit like a palindrome, where many of the events of the beginning end up reappearing and coming full circle towards the end. The neat sense of symmetry appealed to the OCD part of me that longs for order. Parallels and situations that mirror each other are found throughout the book in a way that highlights how circumstances change and people are forced to adapt.

Along with its main plotline, the book mixes in occasional comedic relief, political commentary and some philosophical tangents. I thought it did a good job of balancing these elements in a charming and entertaining way. The beginning of it feels a little slower as it sets up a lot of stuff that happens later, but I enjoyed the book the whole way through.

If you love good, entertaining literature and enjoy having some history and philosophy mixed in to your books, then A Gentleman in Moscow is the perfect book for you. For me, as someone who has always found the Russian Revolution (and its aftermath) to be a fascinating time, I thought it was really fantastic.

A Gentleman in Moscow is a book that you might want to set aside a large chunk of time for. In addition to being a hefty book, it’s worth taking the time to read it thoroughly, to enjoy the humor, and to pay attention to all the details that have been carefully and purposefully woven into the story.

The only people I would not recommend this to is those who usually skim long books. Skimming this is pointless, since you will miss a lot of stuff and nuance and probably end up finding it boring. Much of the “action” and meaning in this book happens subtly and through reading between the lines of events that are going on. If you skim it, you’ll end up missing everything and wondering why people like it.

Have you read this book? What did you think? See A Gentleman in Moscow on Amazon.

Read the first pages of A Gentleman in Moscow

See Everything We Know About the 'A Gentleman in Moscow' Adaptation 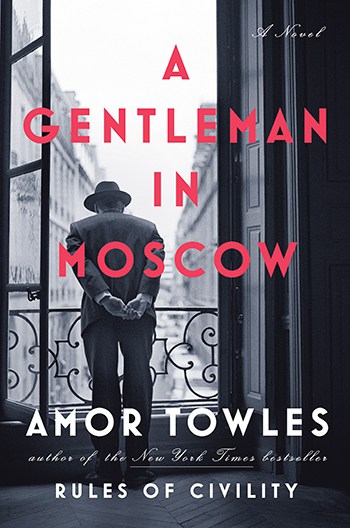 From the Publisher
From the New York Times bestselling author of Rules of Civility—a transporting novel about a man who is ordered to spend the rest of his life inside a luxury hotel. In 1922, Count Alexander Rostov is deemed an unrepentant aristocrat by a Bolshevik tribunal, and is sentenced to house arrest in the Metropol, a grand hotel across the street from the Kremlin. Rostov, an indomitable man of erudition and wit, has never worked a day in his life, and must now live in an attic room while some of the most tumultuous decades in Russian history are unfolding outside the hotel’s doors. Unexpectedly, his reduced circumstances provide him entry into a much larger world of emotional discovery. Brimming with humor, a glittering cast of characters, and one beautifully rendered scene after another, this singular novel casts a spell as it relates the count’s endeavor to gain a deeper understanding of what it means to be a man of purpose.
Show More
Read an Excerpt
See it on Amazon Book Depository