Book review and synopsis for A Deadly Education by Naomi Novik, a story about a young female wizard in a dangerous school of magic.

Galadriel ("El") is a junior at Scholomance, a school of magic. She's also someone with a very strong natural ability for mass destruction and the dark arts. She doesn't want to be a dark wizard (a "maleficer"), but her affinity for destruction limits her ability to use her powers in other ways. Learning non-destructive spells is much more difficult for her, while destructive spells are overpowered in her hands. Others can often sense her darkness, too, which is why El is a loner.

There are two types of power that can fuel spells: malia and mana. Malia (the "bad" type) draws from the life-force of other living things, and users of it are known as "maleficers". Whereas Mana (the "good" type) is generated through effort, like exercise or labor. El is "strict mana".

Orion Lake is a very well-connected classmate, considered the "hero" of their class. Orion's family is part of the New York enclave, the most powerful enclave in the world and his mother is soon to be the leader of it. Enclaves (identified based on location) are groupings of wizards that share power and protect each other. Entry into an enclave is highly sought-after, and everyone sucks up to students born into enclaves, called "enclavers", in hopes of securing a spot.

Together, El, Orion and some of El's friends (all juniors) manage to collectively repair the barrier more securely. But the seniors are angry about this. After some argument, a plan is formed for El, Orion and a group of talented seniors to attempt a repair of the scouring machine in the graduation hall before the ceremony in one week. After much preparation, a group of 20 of them manage to get in and make repairs, though two die. 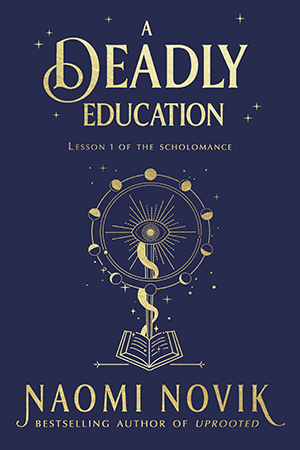