Book review and synopsis for The Last Graduate (Scholomance #2) by Naomi Novik, The second installment in Novik's fantasy trilogy.

In The Last Graduate, the second installment in Naomi Novik's fantasy trilogy, El is now a senior at Scholomance, a school for magically gifted kids.

With graduation looming, El and her allies must prepare for the ceremony which typically involves mass deaths of a majority of the class. All the while, El continues to wrest with her natural affinity for death and destruction.

As El starts to daring to dream about what her life after Scholomance might look like, even with the specter of the many deaths that graduation promises, she is determined to find a way to get herself and her friends out of Scholomance.

The book opens right after the freshmen have been inducted. El is now officially a senior, and she has just gotten the message from her mother warning her to stay away from Orion Lake. She and Orion also don't know if their attempt to fix the machinery for culling mals in the Graduation Hall was successful or not.

As classes resume, El notices she is the only student being attacked by mals. She suspects that it's because she was meant to be dark, destructive balancing element to Orion's heroics, but because she hasn't gone in that direction, the school is trying to take her out. Her alliance (El, Aadhya and Liu) ends up taking on Chloe, a New York enclaver, in order to get access to Chloe's power-sharer (because El is using excessive amounts of mana trying to fend off mals to protect both herself and those around her).

When El fends off a particularly difficult mal attack that is seen by many, kids start to see her as possibly a really important piece (a "game changer") in the struggle for dominance among the enclaves. Outside Scholomance, it's suspected that there may be an enclave war that's brewing. They know from the freshmen bringing in news that the Bangkok enclave has been destroyed...

This is only the first few paragraphs of the summary. The full summary will be available after the book is released on September 28, 2021.

The Last Graduate (Scholomance #2) is the second book in Naomi Novik’s Scholomance series, a trilogy about a girl named El who attends a school of magic. To complicate matters, El has been prophesized to be a bringer of death and doom.

The Last Graduate picks up right where the first book of the series, A Deadly Education, leaves off. El is now a senior, and it’s time to make final preparations for their graduation — which historically has had a death rate of around three quarters of the class.

Narratively, The Last Graduate serves primarily to move the story forward to where it needs to be for the last book of the trilogy. This is not to imply that this book is filler — I won’t give anything away here, but El grows a lot as a character and makes some important decisions about her future and the type of person she wants to be in the duration of this story.

This installment in the trilogy continues to showcase how intentional Novik has been in crafting El’s story. Here, Novik continues to deal with the issues around class divisions that the first book (between the better-situated “enclaver” class and everyone else below them in the social hierarchy) dove into, but she also goes into a bunch of other issues as well.

For example, a major plot component in this book involves the growing tensions between the English-speaking New York enclavers and the Chinese-speaking Shanghai enclavers, which introduces some interesting geopolitical dimensions into the story. I liked that neither side was presented as evil nor saintly. Instead, they’re all acting as self-interested and rational entities, as people typically are. Novik presents believable and understandable grounds for the division between them.

I’m really enjoying this book series, though The Last Graduate definitely feels more like a bridge between the end of the previous book and the beginning of the next rather than a full narrative in and of itself.

That said, it’s definitely an important part of the story, and it ends with a pretty thrilling cliff-hanger. So, if you liked the first book, then of course you should read this one, too! (I wouldn’t recommend reading this without having first read the first book.)

I’m looking forward to the last book of the series coming next year!

See The Last Graduate on Amazon.

Hear a sample of The Last Graduate audiobook on Libro.fm.

Read the first pages of The Last Graduate (Scholomance #2) 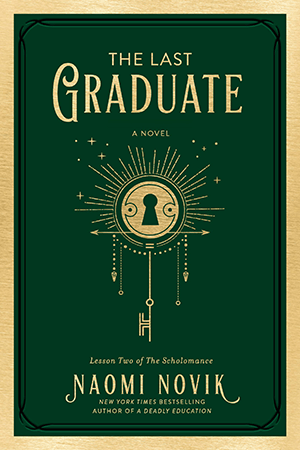 In Wisdom, Shelter. That’s the official motto of the Scholomance. I suppose you could even argue that it’s true—only the wisdom is hard to come by, so the shelter’s rather scant.

Our beloved school does its best to devour all its students—but now that I’ve reached my senior year and have actually won myself a handful of allies, it’s suddenly developed a very particular craving for me. And even if I somehow make it through the endless waves of maleficaria that it keeps throwing at me in between grueling homework assignments, I haven’t any idea how my allies and I are going to make it through the graduation hall alive.

Unless, of course, I finally accept my foretold destiny of dark sorcery and destruction. That would certainly let me sail straight out of here. The course of wisdom, surely.

But I’m not giving in—not to the mals, not to fate, and especially not to the Scholomance. I’m going to get myself and my friends out of this hideous place for good—even if it’s the last thing I do.