By Naomi Novik, A flawed but fun high fantasy novel

I’d heard about the many, many fans of Naomi Novik’s Uprooted a while back, but hadn’t planned on getting it since it belongs firmly in the fantasy genre — not really the typical literary fiction stuff I usually go for. But I was in the mood for something different and easy, so I picked it up at the airport before a flight.

Agnizeska is a girl growing up in a small village that exists under the protection of a wizard, known as the Dragon. Both needed and feared, the Dragon fends off the creatures from the corrupted Woods nearby and offers other magical assistance to the villages around him as needed, but also demands a young lady as tribute every ten years.

Agnizeska is born into one of these tribute years, and, as one expects in these types of books, is chosen to be whisked off to the Dragon’s white tower and cut off from her family for the next decade. She starts off doing mundane household chores at the tower, but soon discovers her own gift for magic.

According to the author, Uprooted was not written as a YA novel, but it was marketed as such — understandable, considering its young protagnoist, fast moving plots, promient romantic storyline, colorful but somewhat simplistic characters. It also suffers from some standard YA pitfalls — overly-hormonal characters, too-tidy resolutions, and very clear divisions of good vs evil with little room for moral ambiguity in-between.

When Agnizeska ends up clumsily entangled in the arms of her powerful, handsome (but much older), brooding new mentor within the first 30 pages, it’s pretty obvious where that part of the plot is heading (and it starts to feel very YA-ish). It’s not until the book starts to flesh out its fantasy world — the dangerous encroaching Woods that afflicts people with a dark, shadowy “corruption”, the ongoing war with a neighboring country that borders the same Woods, the relationship between the villages and their elusive guardian — that it starts to get interesting. Page by page, Novik’s high fantasy world starts to come alive. Its detailed and clearly-conceived depiction of magic plies vividly at the imagination.

By the end the second half of book, the scope of the novel has expanded considerably, into the internal politcs of the kingdom and the backstory the tower and so forth. But these parts feel a little rushed or summarized, and definitely a little unsatisfying, as the story hurls toward its end. There’s suddenly a bunch of plot elements and story — six dangerous Bestiary novels floating around, a brief glance at the capital city’s high society, a magical tribunal — plus a host of characters that crop up, vying for our attention and in need of greater context. Whereas the first half of the story feels controlled and very intentional, the second half feels like the story has spiraled a little out of control and the author seems to be conjuring up a bunch of plot elements to try to corral it into the right direction.

It’s also problematic that Uprooted was published in 2015 and even now already feels like an anachronism. There’s a completely extraneous attempted sexual assault in the novel that is somewhat bizzarely brushed aside, both by the novel and by the characters themselves. Plus the whole problematic power dynamic in the romance plot is all very anti-#metoo. He’s also kind of a jerk which is a trait that gets romanticized a lot in YA novels, to the detriment of young women everywhere. I tried to overlook these things, since these tropes appear so often in books and movies, but it especially bothers me to know that it’s in books marketed towards younger readers.

That all said, I forgot how much fun uncomplicated, effortless books can be. Even with noting it’s flaws and after rolling my eyes a few times, I have to admit I enjoyed a fair amount of it. It’s escapism, if that’s what you’re looking for. For the whole casual sexual assault problem alone though, I would never consider recommending it to anyone in its targeted audience. It’s a shame those problematic elements are in there, though, since they’re not integral to the plot. Without them, it would be a much better book and the basic bones of the plot are actually pretty entertaining and well-concieved. The less-fleshed out elements of the story leave ample room for and seems to demand that a proper sequel be added at a later date. 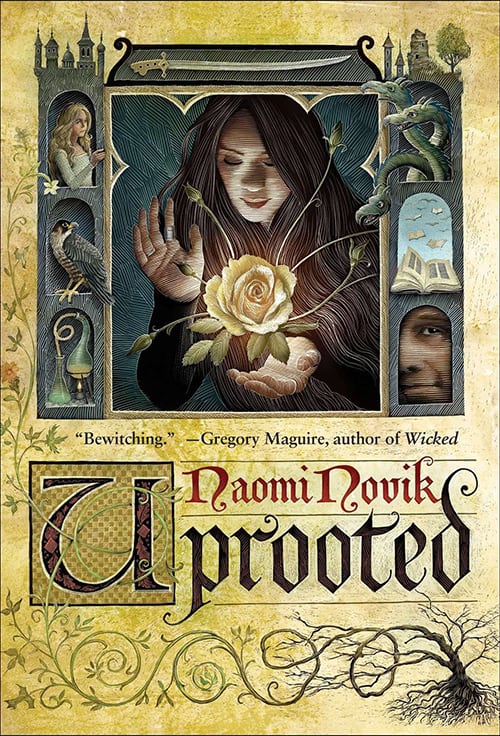 From the Publisher
Agnieszka loves her valley home, her quiet village, the forests and the bright shining river. But the corrupted Wood stands on the border, full of malevolent power, and its shadow lies over her life. Her people rely on the cold, driven wizard known only as the Dragon to keep its powers at bay. But he demands a terrible price for his help: one young woman handed over to serve him for ten years, a fate almost as terrible as falling to the Wood. The next choosing is fast approaching, and Agnieszka is afraid. She knows—everyone knows—that the Dragon will take Kasia: beautiful, graceful, brave Kasia, all the things Agnieszka isn’t, and her dearest friend in the world. And there is no way to save her. But Agnieszka fears the wrong things. For when the Dragon comes, it is not Kasia he will choose.
Show More
See it on
Share This
social & email
New Reviews
recent releases
New Posts
recently posted
Discussion and Replies