By Naomi Novik, A compelling and imaginative retelling of Rumpelstiltskin

Naomi Novik’s newest novel, Spinning Silver, is a loose retelling of the Brother’s Grimm version of Rumplestiltskin — it borrows just enough elements from it to be recognizable while spending most of its time spinning a vivid and original tale.

Miryem lives in a small town in the kingdom of Lithvas and comes from a family of moneylenders. When her family’s finances come into dire straits, she takes over the moneylending on behalf of her father and finds that she has a knack for it.

Her abilities draw the attention of the marauding Staryk knights, magical beings that emerge from the Kingdom of Ice to hunt gold relentlessly. One day, they bring her a bag of faerie silver with demands that it be changed into gold.

Miryem’s attempts to save herself and her family intertwine with the fates of two others: a local girl named Wanda and the Duke’s daughter, Irina. Wanda has a drunkard for a father and needs to find a way to take care of herself and her younger brothers. Meanwhile, Irina is a girl with some Staryk blood and whose father hopes to marry her off to the handsome but cruel Tzar, Mirnatius.

As the future of the sunlit kingdom and that of Winter and Ice come crashing into each other, these three young women find themselves poised to make decisions that will impact the lives of all living being across both kingdoms.

“But I had not known that I was strong enough to do any of those things until they were over and I had done them. I had to do the work first, not knowing.”

I read Novik’s previous novel, Uprooted, not too long ago, and I have to say that I liked this one more, though I’m guessing opinions will be divided. In Uprooted, the main story is the romance and the whole book is built around it, so if the romantic angle is what interests you, you’ll probably like that book more.

Spinning Silver, on the other hand, definitely has romantic subplots, but attempts to cover more substantive themes — it dives into the ideas of responsibility, family and debts — as well. It does mean, however, that the romantic relationships, while still present, give way to somewhat more somber material for large swaths of the book.

In terms of world-building, I’d say they are approximately equally strong. The world in Uprooted is so vivid and unique, but was somewhat less coherent. In Spinning Silver, the world is more coherent and fleshed out, though I think it didn’t quite capture my imagination as much as the magic of the tree people and the encroaching forests of Uprooted.

Novik’s strength lies in conjuring up imaginative and distinct worlds with their unique mechanisms and rules that give them shape and character. In Spinning Silver, she complements her world with a cast of three young women, each of whom is faced with difficult circumstances and various challenges to overcome. Despite existing in a world with structural barriers designed to deprive women of power, they have agency and ultimately hold their fates in their own hands.

There is definitely more of an emphasis on more substantive themes compared to Uprooted, and I appreciated its forays into exploring the responsibilities one has to others and the courage and strength of its protagonists. Still, overall I still found that this book had some YA-type characteristics. The overly “neat” ending and the framing of the  romantic story lines felt more appropriate for a younger reader.

And while it was an improvement over Uprooted, I still don’t like Novik’s romances. Prickly, morally-ambiguous men are just not my thing, even if they are tall and handsome. (And a note to any young girls out there: despite what stories like this might indicate, the guys you want to be with are the ones that treat you well from the start.)

Spinning Silver is a compelling and fantastical tale, and it’s a pleasure to explore Novik’s imaginative worlds and fairytale kingdoms. It proceeds with a strong sense of empowerment and adventure, and it tells a coherent and thematically consistent story about family and duty and responsibility.

While this is probably more appropriate for YA readers, even if it isn’t being marketed as such, it is also worth considering for more general audiences who just like fairytale-type stories as well. 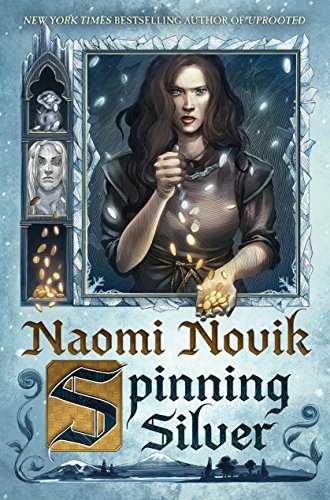 From the Publisher
Miryem is the daughter and granddaughter of moneylenders, but her father’s inability to collect his debts has left his family on the edge of poverty—until Miryem takes matters into her own hands. Hardening her heart, the young woman sets out to claim what is owed and soon gains a reputation for being able to turn silver into gold. When an ill-advised boast draws the attention of the king of the Staryk—grim fey creatures who seem more ice than flesh—Miryem’s fate, and that of two kingdoms, will be forever altered. Set an impossible challenge by the nameless king, Miryem unwittingly spins a web that draws in a peasant girl, Wanda, and the unhappy daughter of a local lord who plots to wed his child to the dashing young tsar. But Tsar Mirnatius is not what he seems. And the secret he hides threatens to consume the lands of humans and Staryk alike. Torn between deadly choices, Miryem and her two unlikely allies embark on a desperate quest that will take them to the limits of sacrifice, power, and love. Channeling the vibrant heart of myth and fairy tale, Spinning Silver weaves a multilayered, magical tapestry that readers will want to return to again and again.
Show More
See it on Amazon
Share This
social & email
New Reviews
recent releases
New Posts
recently posted
Discussion and Replies