Book review and synopsis for The Wife Upstairs by Rachel Hawkins, a re-imagining of Jane Eyre as a mystery-thriller set in modern-day Alabama.

The Wife Upstairs is a reimagining of Jane Eyre as a modern-day Southern Gothic mystery novel set in Alabama. In Hawkin's retelling, Jane is a struggling and cynical former foster kid who meets the handsome and wealth Eddie Rochester. But Jane's fairy-tale romance is complicated by details of Eddie's former wife, who disappeared only months ago.

In this creative spin on a classic gothic novel, Jane will need to uncover the truth about what's been going on in the Thornfield Estates neighborhood.

(The book switches from Jane and Bea's perspectives. Jane is narrating, and Bea is writing in journal form.)

Jane is a dog-walker who is struggling financially, but has clients in the affluent neighborhood of Thornfield Estates. Jane is also former foster kid, and she is guarded, calculating and resentful of the wealthy people she works for. She meets the handsome and rich Edward "Eddie" Rochester, who lives in Thornfield, and Jane and Eddie soon start dating. After a few months they sleep together, and Jane moves in with Eddie two weeks later. Soon, they're engaged.

Eddie's wife Bea has been presumed dead for the last six months. Bea was in a boating accident along with her best friend Blanche Ingraham. At the time, Bea and Eddie had only been recently married, after meeting each other while on vacation a year ago and having a whirlwind romance, resulting in a quick engagement and the marriage soon after.

However, Bea is actually not dead. She is locked in the panic room of their home, and she writes down her side of the story, about how Eddie had joined her and her longtime childhood best friend Blanche for a midnight cruise, but then he murdered Blanche. Bea had woken up afterwards to find herself locked up in the panic room on the third floor of their house. Eddie periodically brings her food. She then takes her journal and hides it in Eddie's pocket, hoping Jane will find it and save her.

Bea and Blanche have a complicated relationship. Bea's mother was an alcoholic and her father was abusive. Bea (real name is Bertha) met Blanche at boarding school, which Bea attended on scholarship. Blanche took Bea under her wing through high school. When they reunited 26, their relationship dynamic changed now that Bea was very wealthy and successful. It became more competitive, but Bea still wanted Blanche's approval. After Bea meets Eddie, Blanche comes on to Eddie, and Bea sleeps with Blanche's husband Tripp to get back at them (though it's later revealed that Eddie actually rejected Blanche's advances).

In present day, Blanche's body is finally found in the lake, and Tripp is soon arrested for her murder. Meanwhile, Jane hears strange noises in her house (which is Bea, who is locked away upstairs). She begins to suspect Eddie, who is acting strangely. When Tripp asks to talk to her, he insists that it wasn't him and that he was framed. Jane wrecks the house looking for evidence of Eddie's guilt and finds Bea's journal. Jane rushes up to release Bea from the panic room. However, Eddie walks in on them, and Jane hit him with a blunt object, leaving him bleeding and with missing teeth.

(The book then switches to Eddie's perspective.) Eddie recalls how after he rejected Blanche romantically, Blanche had told him that she suspected Bea of murdering her own mother after Bea's mother embarrassed Bea at a Southern Manors' event. Eddie didn't believe it until he saw Bea kill Blanche. He had gone up to the lake house that weekend that Blanche was killed, he had found Bea, realized what she had done, incapacitated her and locked her up in their panic room. Eddie loved Bea too much to turn her in, and even now still loves her.

In present day, Eddie's now stuck in the panic room with Jane and Bea downstairs. Jane senses that something is off with Bea story, but then the fire alarm goes off. Eddie has started a fire, knowing the door wouldn't open, but that Bea would come save him. Bea rushes into the fire as Jane runs away. Afterwards, the police only find some of Eddie's teeth (the ones Jane knocked out) and assume that he is dead. There's no trace of Bea. Jane learns that Eddie changed his will to leave all of his assets to her, so Jane is now very wealthy. Jane imagines that they both survived the fire, escaped and are now together.

In The Wife Upstairs, Rachael Hawkins reimagines the classic gothic novel Jane Eyre as a Southern Gothic thriller set in Alabama. It’s in some ways successful, less so in others.

On the plus side, The Wife Upstairs borrows from Jane Eyre, but modernizes and twists the story in interesting ways. A lot of the base components are there, so Jane Eyre fans will enjoy seeing what she’s done with the story elements. I thought it was creative, and I enjoyed trying to anticipate what Hawkins would do with it.

In terms of the less successful components, I’d say this really isn’t a Southern Gothic novel. Instead, it’s a mystery-thriller, based on Jane Eyre that happens to be set in Alabama. It just didn’t capture that gothic spirit for me. When I think of gothic novels, it evokes in me an image of a sort of breathlessness, taught tension, latent eroticism, simmering passion, cryptic characters, billowing curtains and lurking fears. That’s not this book. Instead, I’d say that tone-wise it reads very much like a standard thriller.

There’s one main twist in the story, and it’s not obvious, but it’s guessable. I guessed it, and I imagine others will too. In terms of how well the mystery components are crafted, I’d say it’s just okay. Not bad, but not particularly notable either. I do have to say that I liked the ending though. There’s a few plot holes in how it wraps up (see “What happens at the end of The Wife Upstairs?” in the Explanations section, below), but the idea of it in general seemed like a fitting end for the story and a creative twist on the original.

The Wife Upstairs is a pretty standard mystery-thriller, notable mostly because it’s based on Jane Eyre with a southern twist. It was okay, but I didn’t have strong feelings about it. I think there’s definitely better stuff out there, but if you like Jane Eyre or if you read lots of mystery-thrillers and need new material, you could give this one a go. Ultimately, I think it’s the Jane Eyre fans who also like mysteries that will appreciate this book the most.

Some recent mystery-thrillers that I would recommend over this one are The Guest List (slow build up, but worth it I think), Home Before Dark (if you like haunted house stories) and The Night Swim (if you like some courtroom drama mixed up in your mysteries).

P.S. For Jane Eyre fans or if you need a primer on the storyline of Jane Eyre before reading this, see Jane Eyes as told through Internet Memes.

I didn’t love the narrator for Jane. I found her voice a little nasal for my tastes. She reads everything in a kind of overly serious tone which was not my favorite. If you don’t mind her voice, it’s perfectly serviceable. I recommend listening to the sample before purchasing this one to make sure you’ll like it.

Hear a sample of The Wife Upstairs audiobook on Libro.fm.

Where can I find a full plot summary for One By One?

Right Here! You can find a Quick Summary and the Section-by-Section summary here.

What happens at the end of The Wife Upstairs?

In the end, Jane finds a journal that Bea purposely hid in Eddie’s pocket that reveals her existence. Jane goes to the panic room to release Bea, and then when Eddie shows up, Jane hits him with a blunt object (silver pineapple).

Eddie ends up locked in the panic room. In order to get out, he starts a fire (it’s not clear where he would have procured materials to start a blaze, but whatever). While the room doesn’t open even with the alarm going off, Eddie knows that Bea will save him (of course, he had no way of knowing she’d still be in the house, but whatever). Bea ends up running back upstairs and into the fire to save him.

Jane finds out she was willed all of Eddie/Bea’s money and the company. The police never find Eddie’s body and assume he died in the fire, but Jane suspects that Eddie and Bea escaped together and are off somewhere with each other.

It was Bea. The police arrest Tripp, but he was framed. They later admit their true suspect was Eddie, but that’s only because they still think that Bea is dead.

Read the first pages of The Wife Upstairs 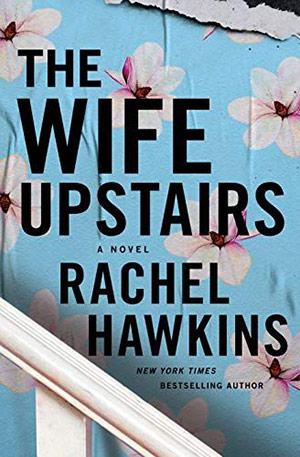