Home Before Dark is Riley Sager’s newest novel, released on June 30, 2020. I previously reviewed his prior novel, Lock Every Door, which I thought was a solid mystery, but I actually liked this one even more. Home Before Dark is a suspenseful and satisfying haunted house story all the way through.

(Note that the last section of this review contains spoilers. I’ll warn you before they start.)

See the Explanation, Plot Synopsis & Book Summary for Home Before Dark (spoilers). Or, for the spoiler-free version:

In Home Before Dark, Maggie Holt is a 30-year-old woman who has inherited a mansion, Baneberry Hall, from her late father, Ewan. 25 years ago, Ewan wrote a non-fictional bestselling novel called House of Horrors about the Holt family’s experiences living in the house he claims was haunted for 20 days, before they fled in terror. It’s a book that came to define Maggie’s life.

Maggie has no recollection of that time, but she has always regarded the book as being full of lies. Against her father’s wishes, Maggie goes back to Baneberry Hall to uncover the truth about what really happened in those twenty fateful and horrific days.

I had a blast reading this book.

The first half is solidly written, but pretty standard mystery-set-in-an-old-house fare. A potentially haunted house. Someone who decides to move in for whatever reason. Mysterious occurrences ensue which may or may not be paranormal in nature, etc. If you read mystery novels, especially ones involving potentially haunted houses, you’re probably well acquainted with this plot progression.

I liked the first half, but didn’t feel strongly about it at that point. But about halfway through, things get more complicated. There are discoveries in both the present and the past that shed light — and prompt thorny new questions — about the houses’s haunted and dark history, which possibly involve a number of potential murders.

By the last quarter of the book, my head was spinning with possible theories on what could have happened. For me, this is when I have the most fun with mystery novels. There are characters with reasons to lie, characters with histories with one another, and new developments happening in each chapter.

Having read two of his books now, it’s obvious that Sager outlines his books in advance (as opposed to being a discovery writer who starts off with a premise and just goes from there). I know this because his books feel meticulously planned in terms of pacing, reveals of information and how the plot points end up coming together.

There’s a couple inconsistencies that don’t ruin the book, but are worth mentioning. Mostly Maggie’s decision-making is a little contrived in parts for the purposes of making the book work. For example, Maggie is clueless in the beginning of the book as to why her parents might not want her to go back to the house, but some facts (which the character definitely would have already been aware of) are later revealed that make it pretty obvious why (see the spoiler-ish thoughts below for details).

Other things like Maggie ignoring her father’s dying wish or not taking the chance to at least discuss with her mother why she’d doing what she’s doing are all a bit contrived for the purpose of pushing the plot forward and strategically withholding information.

All of these things are pretty inconsequential, nit-picky things points though. This probably ranks as one of the mystery novels I’ve read in recent history with the least plot holes, honestly.

Shawn Levy’s 21 Laps has picked up the film rights to Home Before Dark. It’s unknown what the planned format is for the adaptation. For updates and more details, see Everything We Know About the Home Before Dark Adaptation.

I really enjoyed this book. It had a few slight imperfections, but by and large, it’s a really well thought out and well put together plot. The writing is solid, the story is interesting and the end comes together very neatly. All good stuff.

I was a fan of Lock Every Door, but I actually like this one better. They’re both pretty fast reads though, so if in doubt, why not read both? I would recommend this to any mystery fans (especially if you like paranormal mysteries) and to people who only occasionally read mysteries.

Okay, this section is just a few things I didn’t say above about plot inconsistencies since I didn’t want to give any spoilers. None of this ruined or even dampened my enthusiasm for the book, but these are just the things I noticed. I’m only noting them here because I figure other people noticed too and are wondering if others caught them as well.

This first one is minor, but Maggie acting clueless about why her parents didn’t want her to go back doesn’t make a ton of sense to me. We find out that Ewan wrote about a whole slew of murders and deaths that occurred at house, all of which involved the deaths of girls / daughters. Maggie was well-acquainted with the book and would have known that she’d be the obvious person in danger. Even if she didn’t think ghosts were real, it wouldn’t be a mystery why they specifically didn’t want her to return if her father described it as some sort of death trap for girls.

Also, when the book said the mother was going away for a month and then later Maggie is unable to contact her, it was sort of a glaring red flag that her mother was going to swoop back in eventually and reveal something important. Maggie being hell-bent on moving into the house and renovating it without chatting with her mother seems weird. Why wouldn’t she just put it on hold and wait? Especially after things got weird. Also, her mother was on vacation not in a coma, why wouldn’t she call her daughter back?

Finally, it kind of seems like a lot of this pain and suffering could have been avoided by some proper Wills & Estates planning. I mean, why does Ewan even leave Maggie the house? He could have at least granted Jess a life estate in the house (since he knew he had cancer) if he wanted to at least delay Maggie from going back.

Here’s what Ewan should have done. He should have placed the house in a trust for the duration of Maggie’s life. Jess would be named the trustee (and she would name someone else to manage it in the event of her death, with instructions for it to remain vacant) and Maggie the beneficiary. Ewan should have additionally stipulated that upon Maggie’s death, the house would go to Maggie’s issue/children/heirs. That way, by the time someone got their hands on it, all involved parties would be deceased (Maggie, Jess and Ewan). Problem solved. Clearly, Arthur Rosenfield (the lawyer in the book) didn’t give Ewan proper legal guidance.

Show/Hide Detailed Summary (Spoilers)
See here for Explanations and a Full Chapter by Chapter Summary of Home Before Dark by Riley Sager. For the quick version: 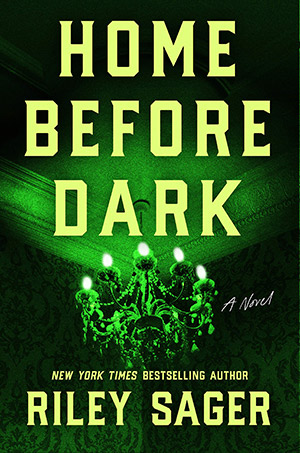 From the Publisher
Maggie Holt is used to such questions. Twenty-five years ago, she and her parents, Ewan and Jess, moved into Baneberry Hall, a rambling Victorian estate in the Vermont woods. They spent three weeks there before fleeing in the dead of night, an ordeal Ewan later recounted in a nonfiction book called House of Horrors. His tale of ghostly happenings and encounters with malevolent spirits became a worldwide phenomenon, rivaling The Amityville Horror in popularity—and skepticism. Today, Maggie is a restorer of old homes and too young to remember any of the events mentioned in her father’s book. But she also doesn’t believe a word of it. Ghosts, after all, don’t exist. When Maggie inherits Baneberry Hall after her father’s death, she returns to renovate the place to prepare it for sale. But her homecoming is anything but warm. People from the past, chronicled in House of Horrors, lurk in the shadows. And locals aren’t thrilled that their small town has been made infamous thanks to Maggie’s father. Even more unnerving is Baneberry Hall itself—a place filled with relics from another era that hint at a history of dark deeds. As Maggie experiences strange occurrences straight out of her father’s book, she starts to believe that what he wrote was more fact than fiction.
Read an Excerpt
See it on Amazon
Top Books
this month
Top Posts
this month
read more
Latest from the blog
Best Historical Fiction of 2020 (So Far)