By Riley Sager, A well-constructed thriller about a gig that sounds too good to be true

Lock Every Door by Riley Sager has been a surprisingly buzzy book this summer, and now that I’ve read it, I can understand why. If you love mystery thrillers, this one is one to check out.

Jules Larsen is a young woman with less than $500 bucks in her checking account, a broken engagement and no job. When she’s offered a chance to “apartment sit” for an apartment at a beautiful, upscale building called The Bartholomew, she jumps at the chance, despite knowing that it all seems a little too good to be true.

As Jules begins to look into the many stories that surround the Bartholomew, she soon starts to uncover secrets of its dark and haunted past. However, it seems there are those around her that would prefer those secrets stay buried.

See Lock Every Door on Amazon.

Lock Every Door was one of the more solidly constructed mystery/thrillers that I’ve read in recent memory. In this story, it’s not clear until the end what type of story this even is. There’s rumors of murders, hauntings and even Satanic rituals surrounding the Bartholomew, so part of the mystery is that you don’t know exactly what you’re dealing with for much of the book.

The book goes by quickly. The writing is solid, and the mystery progresses at a steady clip to keep things interesting. Information, reveals and plot progression is really well paced. I never felt like the book dragged at any point.

I was genuinely impressed at how well put together the plot is. Most of the occurrences in Lock Every Door happen for a specific reason. There aren’t a bunch of cheap scares or fake-outs in terms of the little cliff-hangers in the plot. Even stuff that seems random in the beginning ends up coming together in the end.

I figured who the villain was based on various clues in the book, but there’s much more to the ending than just one bad guy, which made it that much more fun when it was finally revealed what was going on. Most importantly, when the reveal finally came, all the random bits of information in the book made sense. To me, that’s a sign of a well put together mystery.

Riley Sager is the pen name for Todd Ritter, who previously penned a number of books under that name. I went into it knowing the author was male, and I think that made me hyper-aware of checking for voice inconsistencies (like stuff where it sounds like a guy is talking and not a woman), so I was surprised and pleased that I didn’t really notice any.

I try to include some criticisms in most of my reviews, but I honestly don’t have much for this one. I thought the premise was only so-so, but the rest of the story is well done enough that it doesn’t really matter.

When everything is revealed, the whole thing is kind of nutty, but I guess to me there’s generally a nutty-ness factor in a lot of mysteries so as long as it’s not completely out of left field, I tend to be pretty okay with it. I think this one is perhaps a bit nuttier than most, so some people may be turned off by it.

Lock Every Door has been optioned as a co-production by Paramount and Anonymous Content to be adapted into a television series. Brian Buckner who wrote and produced True Blood will be helming and writing the Lock Every Door adaptation.

For all the details, see Everything We Know About the Lock Every Door Film Adaptation.

If you like mystery-thrillers, Lock Every Door is a well constructed and exciting read. The writing is above average for a thriller, and the plot fits together nicely. There is a kind of ridiculous aspect to the plot, so if you have a low tolerance for sort of unlikely events, then maybe this one will be a pass for you.

I thought this was a fun and enjoyable thriller. It went by quickly and served its purpose of providing a couple hours of entertainment well.

See Lock Every Door on Amazon. 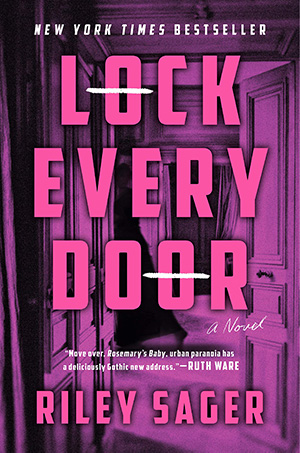 From the Publisher
No visitors. No nights spent away from the apartment. No disturbing the other residents, all of whom are rich or famous or both. These are the only rules for Jules Larsen’s new job as an apartment sitter at the Bartholomew, one of Manhattan's most high-profile and mysterious buildings. Recently heartbroken and just plain broke, Jules is taken in by the splendor of her surroundings and accepts the terms, ready to leave her past life behind. As she gets to know the residents and staff of the Bartholomew, Jules finds herself drawn to fellow apartment sitter Ingrid, who comfortingly reminds her of the sister she lost eight years ago. When Ingrid confides that the Bartholomew is not what it seems and the dark history hidden beneath its gleaming facade is starting to frighten her, Jules brushes it off as a harmless ghost story...until the next day, when Ingrid disappears. Searching for the truth about Ingrid’s disappearance, Jules digs deeper into the Bartholomew's sordid past and into the secrets kept within its walls. What she discovers pits Jules against the clock as she races to unmask a killer, expose the building’s hidden past, and escape the Bartholomew before her temporary status becomes permanent.
Show More
Read an Excerpt
See it on Amazon Book Depository