By Lucy Foley, A slow-burning mystery-thriller set on an island off the coast of West Ireland

The Guest List by Lucy Foley was released in February 2020, but was chosen as one of Reese’s Book Club Picks for June 2020 (there were two this month).

It’s been a while since I’ve read a straight-up mystery-thriller, and I’m trying to switch back and forth when it comes to reading serious books vs more entertaining books. When I started seeing this one around everywhere, it seemed as good a reason as any to check it out.

See the Full Plot Synopsis & Summary for The Guest List by Lucy Foley (spoilers). For the spoiler-free version:

On a small island off the coast of West Ireland, guests have gathered for the wedding of online magazine publisher Julia “Jules” Keegan and celebrity host and survivalist William Slater. They’ve gathered their relatives and loved ones to celebrate in true destination wedding style, with plenty of champagne and fashionable people.

But as a storm brews, the guests and their shared histories collide with one another, and when the lights go out, a body is found. The question that remains is, who did it and why?

The book starts off by assembling a colorful cast of characters in a unique and atmospheric venue. The wedding is such a great setting for a murder mystery, don’t you think? Fancy clothes, lots of booze and so many people being forced to mingle is pretty much the perfect setup for a little mayhem.

The Guest List is a semi-closed room mystery. Which is to say that, there’s a set amount of characters and they are all (more or less) in one place when the murder occurs. So, it’s set on a small private island, and all the people on the island are staying at this property. There’s a limited number of people who could have done it, and you’re trying to figure out who it could be.

Foley does a great job of giving all the characters enough backstory so it leaves it up for grabs as to where your attention should be focused, and more importantly who could be the killer. I read some reviews where people had found the multiple points of view confusing, but I didn’t think it was hard to follow. Instead, I think the multiple points of view add a lot to the story and worked well. Perhaps your mileage will differ.

It should be noted that this story takes a while — like, a looong while — to really get underway. You know from page one that something has happened (a loud scream and soon, a body!), but for a long stretch through the book, there’s mostly just insinuations, stuff that seems ominous but are just pranks and people hinting at secrets. By the halfway point, I was pretty ready to throw in the towel if there wasn’t a real plot development very soon. I’m also very much not a fan of fakeouts (he’s holding something in his hand! oh, it’s just a flashlight — that type of thing) and there are quite a few in this book, especially in the earlier sections.

At the sixty percent mark, I was officially out of patience. (In my mind, I had started writing an absolutely scathing review.) I was also reading an e-book, so I was acutely aware of my progress. But then, finally, thankfully, stuff started to happen.

Once the plot was actually moving forward, I very quickly got back on board. Stuff comes together in a way that fits together surprisingly well and it draws in a lot of small details that appear earlier in the book, which I loved. The atmosphere of the storm raging and howling all around them as the book nears its finale and brings all its narrative threads together is gratifying and fun. And I was pleased that all the characters basically behave in ways that make sense and is consistent with how humans behave (which often can’t be said of some thrillers).

I do wish the mystery aspects weren’t so back-loaded though. It’s not that the the beginning is boring (it’s not), it’s that I like trying to guess what the ending is or what’s going to happen next, but when the plot has made almost no progression, there’s really nothing to go on. By the time there’s enough information to start guessing, it’s already too late since everything starts unraveling at a really fast pace.

The Guest List has a slow buildup that results in a pretty solid mystery, but the pacing of it is unfortunate. It starts too slow and then everything gets revealed quite quickly. Still, I really liked the atmosphere of it, the multiple coherent storylines running through it, and the many small details that end up resurfacing.

This is definitely one just for mystery-thriller fans. (I also wouldn’t recommend buying it for any young readers as it does have more “adult” aspects of it’s plot.) I read it over one weekend and for whatever flaws it has, I did enjoy the mystery. There’s enough cleverness in there that you’ll likely feel it was worth the time.

Show/Hide Detailed Summary (Spoilers)
See here for the Full Plot Summary & Synopsis for The Guest List. For the quick version: 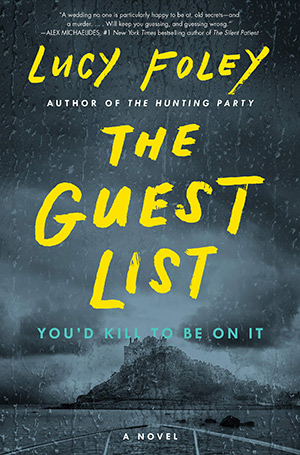 From the Publisher
On an island off the coast of Ireland, guests gather to celebrate two people joining their lives together as one. The groom: handsome and charming, a rising television star. The bride: smart and ambitious, a magazine publisher. It’s a wedding for a magazine, or for a celebrity: the designer dress, the remote location, the luxe party favors, the boutique whiskey. The cell phone service may be spotty and the waves may be rough, but every detail has been expertly planned and will be expertly executed. But perfection is for plans, and people are all too human. As the champagne is popped and the festivities begin, resentments and petty jealousies begin to mingle with the reminiscences and well wishes. The groomsmen begin the drinking game from their school days. The bridesmaid not-so-accidentally ruins her dress. The bride’s oldest (male) friend gives an uncomfortably caring toast. And then someone turns up dead. Who didn’t wish the happy couple well? And perhaps more important, why?
Read an Excerpt
See it on Amazon Book Depository