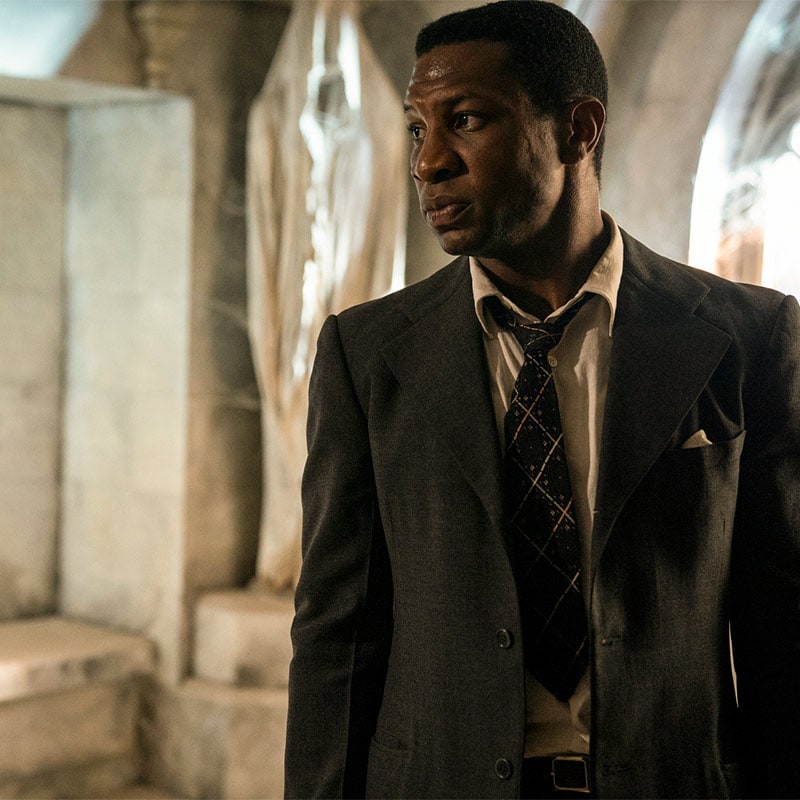 Lovecraft Country, Episode 8 (“Jig-A-Bobo”) opens with a funeral of Emmett Till, a young black boy who was murdered, as the black community in Chicago mourns. A huge crowd has gathered to protest and pay their respects.

Diana had been best friends with Emmett and is very upset. She attends the gathering along with Atticus, Montrose, Lettie and Ruby. Hippolyta is missing (presumably off on her adventures as seen in Episode 7), though Diana still thinks Hippolyta is off on an extended work trip.

Part-way through, Diana disappears to wander the streets alone. She sees black girls laughing and throws stones at them, angry over their happiness, and they run away. Captain Lancaster and another officer come up to her, demanding information about Hippolyta. They corner her and ask her about the comic Diana drew which they found at Hiram’s observatory. Lancaster then performs a spell on Diana, which including an incantation and placing spit on her head.

Elsewhere, Atticus shows up to a meeting with Christina. He asks her to teach him how to cast spells. In exchange, he gives her the key they found in the orrery in Episode 7. She explains to him that spellcasting requires energy, intention and a body — perfect alignment in order to “upset the balance of nature without a disaster”. She also instructs him on how to make a symbol of protection for his spell. Christina also admits that she plans to cast a different spell to make herself immortal when the autumnal equinox rolls around. At Lettie’s boarding house, Ji-Ah shows up, looking for Atticus. Ji-Ah finally has a chance to explain that she is a kumiho, which is a “nine-tailed fox” (succubus-type creature). Atticus demands more information about Ji-Ah’s vision of his death, but she doesn’t know since no one else has survived before. Lettie recognizes that the real reason Ji-Ah is here is because she is in love with Atticus, but Atticus angrily tells Ji-Ah to leave if she doesn’t know anything. 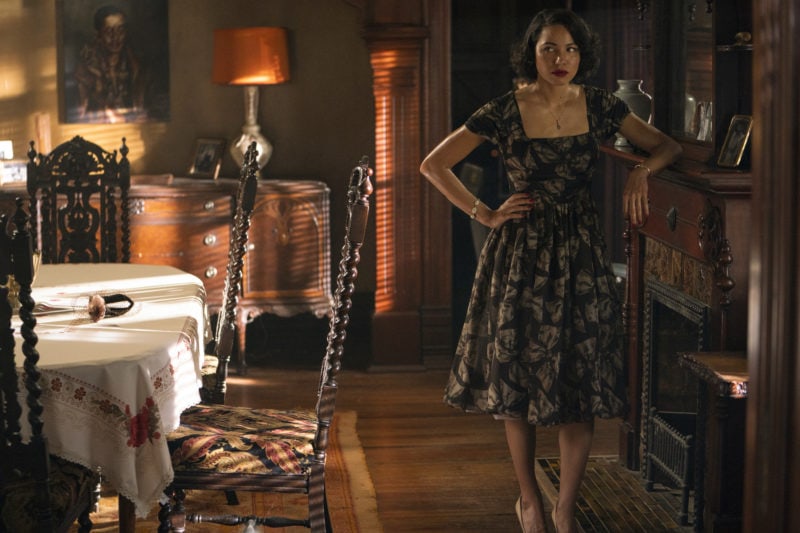 Afterwards, Lettie is upset with Atticus for having to find out about all of this from Ji-Ah, instead of hearing about it earlier. Atticus tells Lettie that he’s decided to cast the spell of protection that he learned from Christina. Lettie tells him that he can’t trust Christina, but Atticus has made up his mind. (We later find out that he knows Lettie is pregnant.) 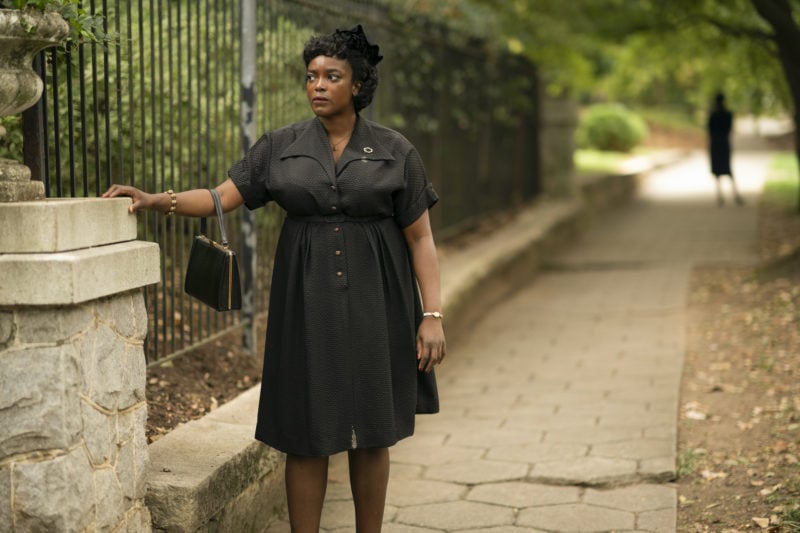 After the funeral, Ruby heads to Christina’s place and sleeps with “William” (who she knows now is actually Christina). She then takes a potion (to transform into Hillary) and sleeps with him again. Afterwards, Ruby demands to know whether Christina cares about Emmett Till’s death and whether she feels guilty for her privilege of being safe in her whiteness. Christina admits that she does not care, but she doesn’t think Ruby really cares either. She says that Ruby is a woman who wants what she wants, which is why she came over to her house for sex.

Back at home, Diana sees a drawing on cover of Uncle Tom’s Cabin morph into a scary-looking girl (as the result of Lancaster’s spell), though it only looks that way to her. Soon, two creepy-looking girls are following her around, but no one else can see them. She’s also not able to talk about it to tell others what’s going on. When she tries, her throat closes up and it causes her to cough. 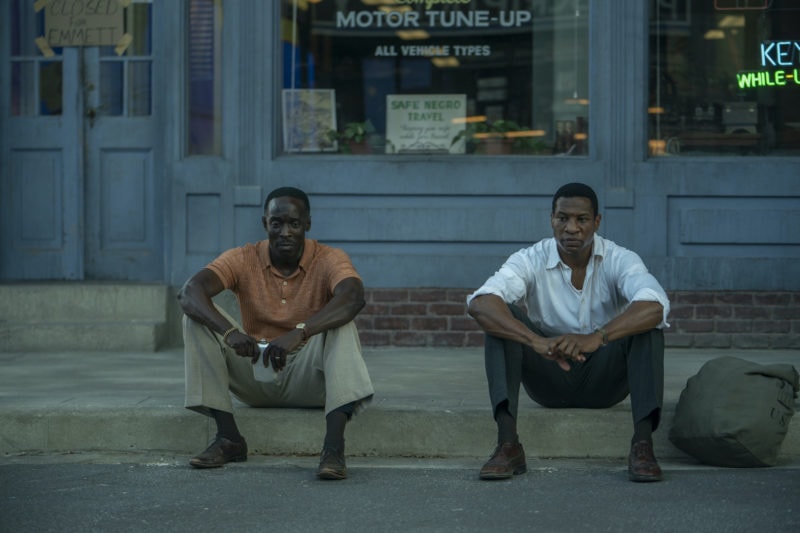 Atticus talks to Montrose and tells him about his experience at the observatory. Atticus admits that he also went into the portal (the same one Hippolyta went through) and left with insight about his future. He knows that Lettie is pregnant with their future child, even though she hasn’t told him yet. He says that his son (George Freeman, named after Atticus’s Uncle George) will eventually write a book, entitled Lovecraft Country. He describes the book as basically telling their story with some minor differences (which basically track the differences between the HBO show and the book by Matt Ruff).

Atticus also says that Christina has the key, but won’t be able to use the machine because it’s broken. It’s possible Hippolyta is trapped in the future. Atticus’s experience in the portal was very different from Hippolyta’s. He was only there for a brief time. There was rioting and a hooded woman shoved the book Lovecraft Country in his hand and then pushed him back through the portal. 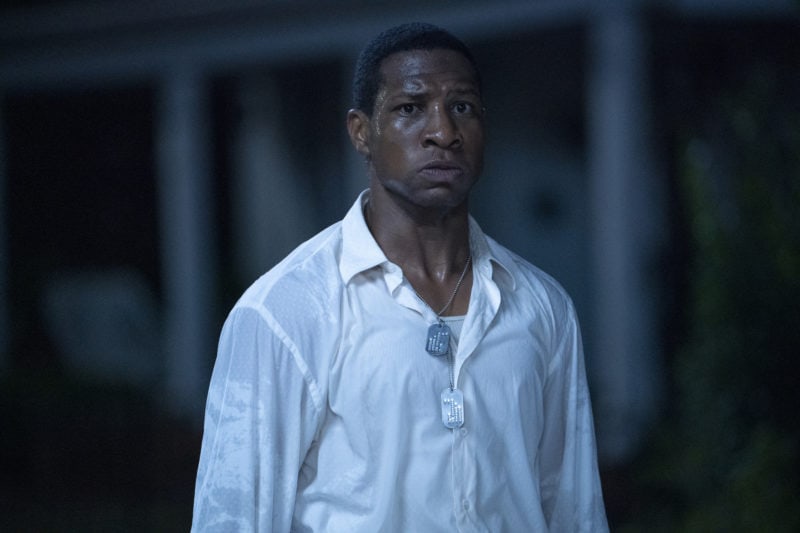 (So, just to help with some clarity — basically, Atticus is flipping out because he went into the portal and found out about his son. Now, he’s worried about Ji-Ah’s vision of his death, which she had told him about back when he was in Korea, because he wants to stick around to have that son and that life. So, he’s willing to go to extremes like making a deal with the shady Christina in order to get himself protection so he can live to see that future.)

Lettie meets with Christina. Lettie offers Christina the negatives she has of Titus’s pages (from the Book of Names). In exchange, she wants Christina to make Atticus invulnerable. Christina says no, that she’ll give invulnerability to Lettie, but not Atticus. Lettie agrees, and Christina recites an incantation to give Lettie the protective and healing Mark of Cain.

Diana goes to Lancaster and demands to know what he did to her. He explains that it prevents her from talking about him to others. He doesn’t want her telling other people about his interest in her and her mother. Lancaster says he’ll remove the curse if she gives him the orrery they found at the Winthrop House. But Diana spits on him and refuses.

Meanwhile, Atticus and Montrose prepare the protection spell. Then, Montrose chants the incantation, but afterwards nothing seems to happen.

Near the docks, Christina meets up with two men, but for some reason she has paid them to attack her in the same way that Emmett Till had been brutalized. She’s beat up with her body weighted by a fan blade, fastened around her neck with barbed wire, shot and tossed into the river. Due to her invulnerability, she survives of course, but still seems shocked by the brutality of it. At the Guide offices, Diana lets the creepy creatures catch up with her and is prepared to beat them with a pipe. However, Montrose walks in and sees her swinging at the air and tries to restrain her. As he does, the creatures are able to attack her and claw at her as she bleeds.

At Lettie’s place, Lettie admits to Ruby that she’s pregnant. Ruby admits that she’s been hanging out with Christina, and she says that Christina has been giving her potions and can teach her magic. Lettie is called away before they can continue the conversation. The police are there to search the house, but due to a protective spell on the house, they aren’t able to enter, but they start shooting up the house. Atticus arrives at the house to see the police shooting. Lettie runs out when she sees the cops aimed at him, but just before a bullet is about to his Atticus, a giant monster burrows out of the ground (apparently as a result of Atticus’s protection spell) and proceeds to attack all the cops. Atticus and Lettie are unharmed.