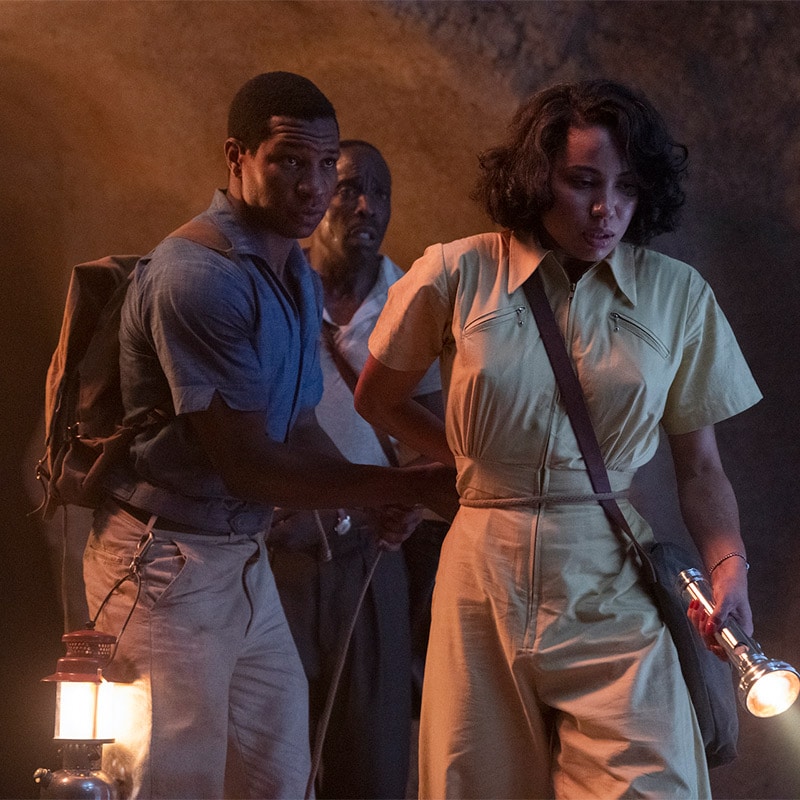 Lovecraft Country, Episode 4 (“A History of Violence”) opens Montrose drinking and plagued with thoughts about the state of the world and memories of the things he’d done wrong and things from the past that haunt him.

At Letitia’s house, Christina Braithwhite shows up. Letitia figures out that Christina was the one who gave her the money for the house (she originally believed it was an inheritance from her mother). Christina is unable to enter due to the protections that had been put on the house when Letitia had the spirits banished from the house. Christina is looking for the orrery (scale model of the solar system) that Hiram kept in the house (though the orrery is now in Hippolyta’s possession and being kept in the offices of the Negro Safe Travel Guide, though Hippolyta is unsure how to operate it). Christina also mentions that Atticus had tried to kill her (at the end of Episode 3).

Letitia tracks Atticus down and confronts him about it. He admits it, and he fills Letitia in on the rest of what he knows. Christina is interested in the missing parts of the Book of Names, pages that would allow them to translate the language of Adam (which this book, one that contains their spells, is written in.) Atticus and Letitia hypothesize that this “orrery” must be the key to finding the pages that Hiram once had.

The alternative is that Titus also has a set of those pages, but they are in a booby-trapped vault that only he can access. They wonder if Atticus, because he is Titus’s most direct descendant, may be able to access that vault.

They ask Montrose for help, since he did extensive research on the Braithwhites after he first heard about Atticus’s legacy. Montrose is reluctant at first, viewing it as a game that Christina is setting up which Atticus is sure to lose, but eventually relents. Montrose agrees to help them, and he says he think the vault they’re looking for is in Boston.

Meanwhile, Christina goes to see Lancaster, the Chicago Police Chief. He is unhappy to see Christina “in his city” and reminds her that she’s not technically a member of the Sons of Adam, since females are not allowed. Christina talks about locating the orrery, revealing that the orrery is actually the key to unlocking Hiram’s time machine.

Atticus, Montrose, and Letitia get ready head to Boston, where they believe Hiram’s vault is at the Museum of Natural History. Hippolyta and Diana (“Dee”) end up coming along because they need Woody, Hippolyta’s car, to get there. Hippolyta also invite Tree on their road trip, a friend who’s visiting his girl in Philly and needs a ride.

In Boston, they arrive at the museum where Hiram was once on the board. Montrose knows one of the security guards who agrees to let them back in to the museum after hours. Atticus notes that they should check the galleries that were renovated while Hiram was part of the board, since that’s likely where the vault will be. Hippolyta, who loves astronomy, takes Dee to see the planetarium.

Atticus locates a statue on a platform that look like it could be a doorway. In that room, Montrose has the idea to turn off their flashlights. In the darkness, the light shining through the window forms a beam that unlocks a secret passageway under the statute. Climbing down a rope, they enters a domed room with three tunnels. A message around the dome reads “Beware all ye who tread the path, ever the ties will rise”. Letitia tosses down a map from the museum detailing Titus’s voyages before as enters.

Back in Chicago, Ruby goes into a Marshall Fields and notices that there’s a black girl working here. She feels upset, since she has recently applied for a job there (she talks about this at the housewarming part in Episode 3). She knows that they are unlikely to hire two black girls at once. That night while doing her other gig as a lounge singer, she sings the blues.

William (Christina’s henchman) beats up two men that have been tailing Christina, presumably on Lancaster’s orders, and then heads to the bay Ruby sings at. He approaches Ruby after her set, offering to change her life. They talk and flirt and Ruby, despite insisting she won’t, goes home with William and they sleep together.

Titus had been on three expeditions and Atticus suggests that the three tunnels represent those expeditions. They start with the North Tunnel, which they think represents Titus’s voyage to the Carribean. It leads to a cavern with a long wooden plank, though it’s impossible to see where it leads. They attach a rope to Letita so she can go across it.

(In a comedic aside, Letitia is nervous about the security of the rope. Montrose tells her that his knowledge of knots is passed down from his ancestor who was slave in charge of tying down horses, who would’ve been beaten if his knots didn’t hold, which is how they know how to secure her with that rope. Letitia leaves, and Atticus points out to his father that their family line isn’t descended from slaves. Montrose responds that “she out there, ain’t she?”)

As Letitia crosses, she realizes the room is booby trapped. Atticus has to untie her so she can hurry past a swinging blade. After she jumps, the plank begins to disappear. Montrose then has to jump across the quickly disappearing plank. They hurry along the rest of it to find a door locked by puzzle combination. They press the panels in the order that represents the story of the Expulsion of Adam and Eve from the Garden of Eden. The door opens just as the plank is gone.

In the next tunnel, there is water on the ground. It slowly rises as they explore the tunnel. Montrose and Atticus get into an argument, but they are interrupted by Letitia’s discovery of a body. She’s recognizes the body as that of one of her neighbors who had gone missing. She realizes he may have been killed chasing the pages of the Book of Names as well. At the end of the tunnel is an elevator shaft, but they choose to keep exploring the other branches of tunnels instead.

They find a vault-like door with a human arm sticking out of it. Clearly, that person’s arm was the wrong key. Atticus puts in his own arm, and a ladder drops down. It leads to a room with decayed corpses are everywhere. As Atticus reaches out to touch a scroll, a naked intersex (with both male and female genitalia) person with tribal markings reanimates, filling out with with flesh and blood. He/She speaks in a language (Arawak) that only Atticus can understand. Atticus explains that Titus has been dead for a long time and that he is related by blood, but Titus is not his family.

The person identifies themselves as Yahima Maraokoti, both male and female, they are two souls in one. Yahima comes from a land of many waters, and Titus arrived by ship, looking for people who could read his book. Yahima recognized the symbols from a cave (the cave of Alomun Kundi). Yahima helps him, but stops when she realizes Titus’s monstrous nature. He slaughters her people and imprisons her.

When she declines to help, Montrose grabs the pages, but it causes the windows in the room to crack and the room to quickly fill with water. Montrose grabs Yahima and together all four of them rush out and swim to the elevator. In the elevator Yahima tries to speak, but lets out a screech instead. Atticus knocks her out until they can figure out what is going on.

As Hippolya and Diana drive back to Chicago by themselves, Hippolyta notices Diana looking at George’s road atlas. She sees that the last place he went to was Devon County (from Episode 1 & 2). Hippolyta has questions about George’s death (she was told that he was shot by a racist sherrif), so she decides to head there to get answers.

Later, they realize that Titus turned Yahima into a siren, so she could not speak if she escaped the vault. Atticus decides he will try to teach her English so she can translate the pages into English for them. As she works, Montrose enters the room and closes the door so they are alone. He apologizes to Yahima and then slits her throat.