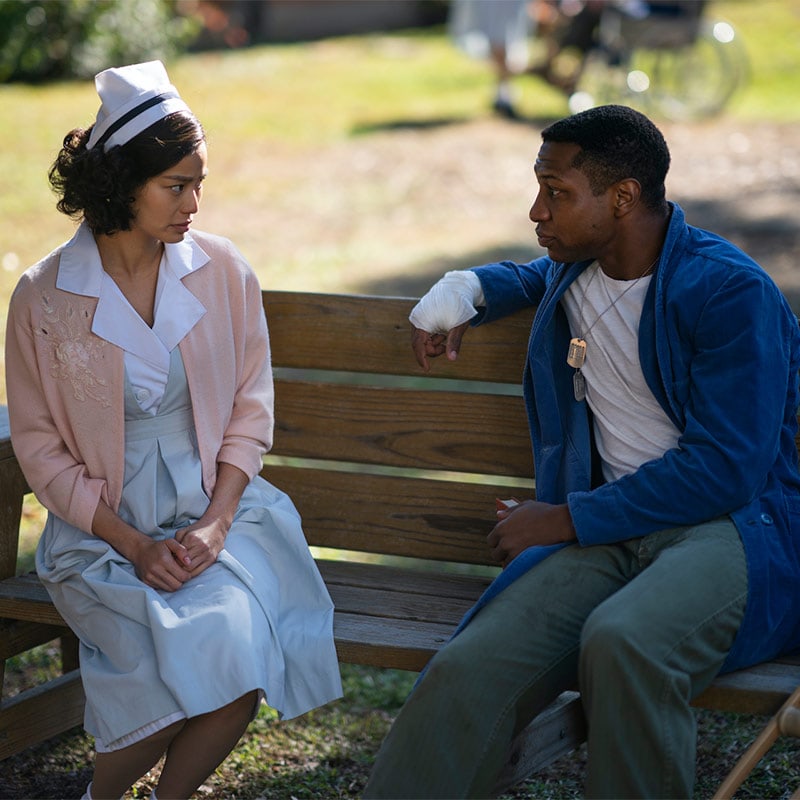 Lovecraft Country, Episode 6 (“Meet Me in Daegu”) opens by introducing a character that’s been hinted at (and seen via a strange vision) in earlier episodes, Ji-Ah. The show has established that Atticus knows her from his soldiering days, but it’s not clear what that relationship was or how it came about.

In the Fall of 1949, Ji-Ah is a woman who lives in Korea and loves American movies. She’s a nursing student and also works as a nurse. Her mother urges her to bring home a man, and so she goes to a speed dating event. No luck there, but her friend invites her out to go to a club afterwards, and she brings home a guy.

She immediately has intercourse with the guy, but as soon as he’s done, she sprouts tentacles/”tails”, devours his soul and he explodes. Her mother comes in afterwards and tells her she needs to bring home ten more.

Korea is currently being occupied by American soldiers who are fighting with the communists. Her mother suggests, with increasing frustration over Ji-Ah’s inability to bring home more men, targeting those soldiers, noting how some of them rape the women they claim to be protecting. Ji-Ah talks about how she is left with all the memories of the men she devours, but her mother does not want to hear about it. By now, J-Ah only needs two more men. After that, she will be human again.

After Ji-Ah devours an American solider, she and her mother clean the blood off the walls of the room. As they talk, it’s explained that her mother went to a shaman in order to kill her husband. Her husband was a bad man who molested Ji-Ah, which is why her mother wanted him dead. Her mother had known there would be a “price” to be paid for being able to kill him, but she had not known what it would be. The shaman turned Ji-Ah into a monster (a kumiho).

To revert Ji-Ah into a human, she would have to devour 100 souls. Now she needs one more. When the mother demands that Ji-Ah find one more, she refuses. Ji-Ah (the monster) insists that Ji-Ah (the human) is gone and that she has none of her memories. Ji-Ah reminds the mother that she had been a woman with a child born out of wedlock, which is why she married the bad man in the first place, in order to spare herself the indignity.

Soon, the nurses in Ji-Ah’s shift are rounded up by American soldiers who say that they know one of them is leaking information to the communists. When no one comes forward, they randomly start shooting the nurses. A solider questions Ji-Ah, and another solider — which turns out to be Atticus — puts a gun in her face. Before Ji-Ah is about to be shot, her best friend comes forward to admit that she is the leak. Her friend is dragged away.

Later, in 1950, Ji-Ah sees that the only movie theater in town has been shut down, accused of being run by communist sympathizers. At the hospital she sees Atticus in one of the hospital beds and recognizes him. She decides she will devour him as her final soul.

When the nurses are taking a break, Ji-Ah ends up talking to Atticus. She explains how watching movies is an escape for her, and Atticus explains how books are his escape. He talks about how black people are treated poorly in America, and he volunteered as a solider to get even further away and to get away from his father. When she mentions her best friend (who was presumably killed by his squad), Atticus casually mentions wanting to meet her, and Ji-Ah says nothing.

Ji-Ah shows up to the base where she and Atticus have arranged to go out for a night out on town. However, another solider meets her out there and brings her inside the base, where she finds Atticus standing with a rose in a tent that’s been set up as a makeshift movie theater.

Afterwards, she takes him back to her place. Atticus admits that he is a virgin. They start getting intimate, but Ji-Ah suddenly kicks him out. When her mother comes in, Ji-Ah tells her that he’s the first person she’s felt something for. Her mother says that’s she is “truly a monster” for feeling that way because he killed her best friend.

The next day, she finally confronts him with the truth that he killed her friend. Atticus asks her why she agreed to go out with him. Ji-Ah admits that she was planning on killing him, but then she changed her mind. She tells Atticus that she thinks they could be the people they see each other as, and Atticus kisses her.

Atticus and Ji-Ah continue seeing each other, and Ji-Ah believes she can control her “tails”. Her mother disapproves, but Ji-Ah tells her mother that she has spent this whole time telling Ji-Ah that she was unloveable just to make excuses for her own inability to love Ji-Ah.

One day, Ji-Ah loses control, her “tails” emerge and she has to force her tails to let go of Atticus. Atticus freaks out and runs out. Ji-Ah is also freaking out because in addition to seeing his memories, she see visions of his future, including his death. We see a shot of Atticus in pain, held back by leather straps.

Afterwards, Ji-Ah and her mother go back to the Shaman. (There’s a red fox there that Ji-Ah looks at strangely, but it’s not explained why.) Her mother says that Ji-Ah has questions and she (her mother) is willing to pay the price to get answers. Ji-Ah wants to know if her vision of the future is real and if Atticus will die.

Instead of answering her question, which the Shaman dismisses as meaningless “mortal concerns”, she tells Ji-Ah that she has not even “become one with the darkness yet.” She says that Ji-Ah will see many more deaths before her journey is done.