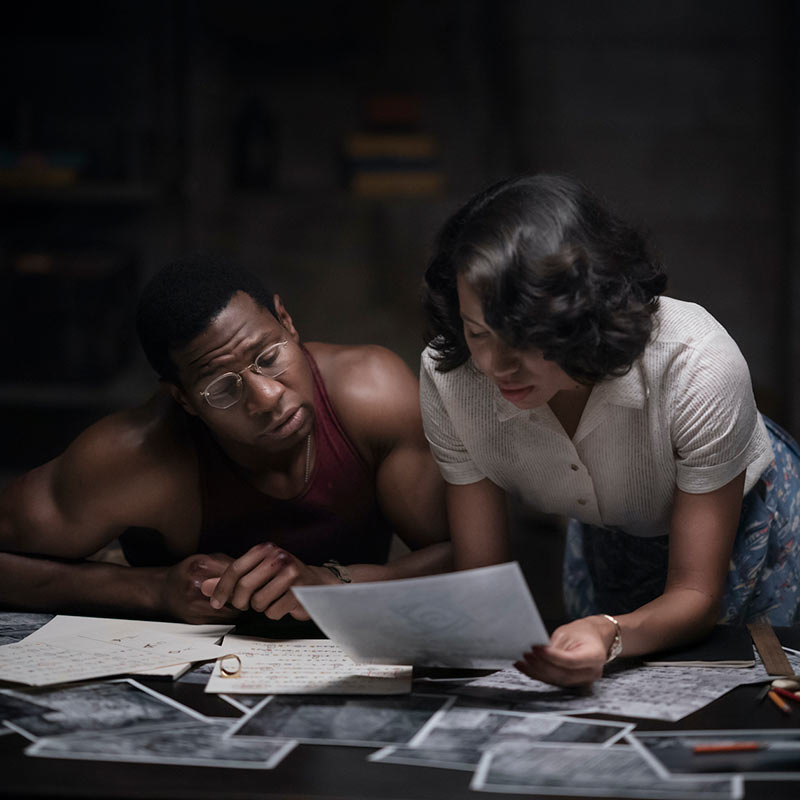 Lovecraft Country, Episode 5 (“Strange Case”) opens with Ruby wakes up in William’s house to find herself in the body of a white woman. She frantically runs out and away from there. She’s in the street when she run into into a young black boy. The police pull up, accuse the boy of hurting her and then take her back to William’s house. On the way back, Ruby is in pain as her body changes. William explains that she’s going through a metamorphosis as she transforms back into her original body. When she transforms, the outer layer of her skin peels off the reveal the other version of her inside.

The last episode ended with Montrose slicing the throat of Yahima, the re-animated corpse and siren who had been helping them translate Titus’s pages. Atticus and Lettie find Montrose alone in the room, and he says that he let her go. When Atticus asks about Titus’s pages, Montrose doesn’t say anything and Tic knows they’re gone. He furiously beats up Montrose until other people pull him off. Afterwards, Lettie tells Atticus that he scared her acing like that.

When Ruby awakes, she’s herself again, and William explains to her what happened. Ruby transforms back and spends a day experiencing life as a white woman. When she’s back to herself, William explains that she’s welcome to be whichever version of herself she wants. The next day, Ruby shows up as a white woman to apply for a job at Marshall Fields. She gives herself the name of “Hillary Davenport” and she’s offered the job of assistant manager. However, she starts to transform back before the interview ends (and doesn’t have time to take the potion to elongate the effects) and has to run out of there.

Montrose is upset after being beat up by his son. He goes to see his lover, Sammy, and they have sex.

Ruby has her first day of work at Marshall Fields, and she talks to Tamara, the only black woman who works there. She learns that Tamara has very limited educational credentials, and Ruby is put off that Tamara got the job over her. Ruby wonders if Tamara got the job by sleeping with the boss, Paul Hughes, but the other women assure her that he’s not like that. During a break, the other women chat about going to the South Side and make some racist remarks, which Ruby struggles with.

William picks Ruby up from work and tells her there’s a party they need Ruby to attend that night, but as a server. It’s a meeting of the brotherhood of the Sons of Adam. When Christina Braithwhite shows up, she explains that they need her to hide a magical object (a magical charm) in the office of Police Captain Lancaster. At first, Ruby says no, since she thinks messing with the police will get her killed. However, Christina asks Ruby if she cares about William. Christina says that Lancaster tried to kill William and believes he’s dead. They need her help to get revenge of Lancaster for what he did.

Meanwhile, Atticus has a nightmare of what happened back at the Braithwhite Manor in Ardham (in episodes 1 and 2) when he falls asleep trying to translate Titu’s pages using the photos that Ruby had taken of the pages. As Lettie and Atticus go over the photos, Atticus tells her that he knows Montrose killed Yahima as well as destroying those pages. Lettie knows that Montrose did it to protect Atticus from all of this, but is horrified nonetheless.

In Lancaster’s office, Ruby goes to hide the charm but ends up having to hide in a closet when she sees him coming. She finds a man chained up there with his tongue cut out and is horrified.

Meanwhile, Montrose goes to a drag club with Sammy. Sammy is comfortable and happy in that environment, but Montrose looks uncomfortable. However, as he dances, Montrose starts to let loose and enjoy himself. He finally kisses Sammy, which he previously had been unable to do.

The next day, Ruby gets Tamara to take all of them out to Chicago’s South Side to go dancing. Ruby looks upset seeing her racist co-workers dancing and having fun. She knows she need to take another vial of potion to remain “Hillary”, but doesn’t take it. Instead she transforms. As she does, she overhears and sees their boss, Paul, attack Tamara, who pushes him away.

Later, Christina finds Ruby sitting, upset and disillusioned, at William’s place. Christina tries to sympathize, which angers Ruby. However, Christina then reminds Ruby that the gift they’ve given her is not about being white, it’s that magic lets you do whatever you want. The next day, Ruby marches into the office and quits the job. Paul mentions wanting to fire Tamara. Then, Ruby seduces Paul so she can ties him up and shoves a stiletto up his ass until he bleeds. She lets herself transform as she does this so that Paul can know who did this to him.

When Ruby goes back to William’s place, she sees him as he transforms into Christina. (In other words, Christina and William are the same person. Christina likely created this potion in order to be eligible for entry into the Sons of Adams.)

The episode ends with Atticus translating a part of Titus’s pages and having a realization. He calls a number, and Ji-Ah picks up. She says that she warned him, and Atticus wants to know “what” she is.