Book review and synopsis for Later by Stephen King, a horror story about the secrets we keep buried and a boy who can speak to the dead.

In Later, Jamie Conklin is a boy who can see and speak to the dead. But the dead often have secrets, some that perhaps others would like to keep hidden, and using his special abilities come at a cost.

Soon, Jamie gets drawn into a police investigation by an NYPD detective gone rogue, and what follows is fast-paced horror story about the loss of innocence and the secrets we keep buried.

The one-paragraph version of this: Jamie is a boy who can see and speak to ghosts. One day, he helps to figure out the location of a bomb by talking to the deceased bomber, Kenneth. But Kenneth's spirit is overtaken by a demon who haunts Jamie until Jamie undergoes a battle of wills with the demon. As a result of the this, the demon must come if Jamie calls on him. Jamie is warned never call on the demon, since it risks inviting that demon back into his life. However, when Jamie's life is imperiled years later, he calls on the demon for help. Kenneth knows that someday later he may have to battle the demon again to banish it for good.

In Later, Jamie Conklin, is a boy who can see and speak to ghosts, who typically remain for a few days following the death. The ghosts must respond honestly when asked a direct question. Jamie's mother, Tia Conklin, is a single mother and literary agent. She runs an agency that was formerly run by her brother, Harry, who now has early onset Alzheimer's. Tia warns Jamie not to tell others about his special abilities. She says ghosts may know secrets that people want kept hidden.

When the financial crisis in 2008 hits, Tia's mother's assets get caught up in a Ponzi scheme that her brother, Harry had invested the agency's funds into. Then, in late 2009, the star author of her agency, Regis Thomas, dies without having completed the 10th and final book in his popular book series. Facing financial ruin, Tia asks 9-year-old Jamie to speak to Regis's ghost to find out his intentions for the last book. Tia asks her girlfriend Liz, an NYPD detective, for help in doing so, since the police are looking into his death (which turns out to be of a heart attack). Tia then writes the book herself, saving them financially.

One day in 2013, Liz demands that Jamie help her with a situation involving a serial bomber named Kenneth Therriault. With authorities closing in, Kenneth has shot himself, but not before planting one last bomb. Despite Jamie's discomfort, Liz has Jamie talk to Kenneth and reveal the bomb's location. While many lives are saved, Kenneth's ghost starts haunting Jamie instead of fading away like other ghosts. Jamie suspects that Kenneth's spirit has been possessed by an evil being. Tia dumps Liz not long after when she finds cocaine on Liz.

Jamie turns to Professor Burkett, a former neighbor, for help. Mr. Burkett does some research and suggests that Jamie engage the demon ("deadlight") in a battle of wills, called the Ritual of Chüd. Jamie does it and it works. As a result, the demon must not only stop haunting Jamie, it must also answer when Jamie calls. When Jamie tells Mr. Burkett that the ritual was successful, Mr. Burkett strenuously warns him not to ever call on the demon, saying it's best to leave it alone and not invite it back into his life. Mr. Burkett passes away not long after of a heart attack.

When Jamie is 15, Liz shows up again and kidnaps Jamie. Liz has recently lost her job after being implicated in the drug trade. Now, she wants Jamie's (involuntary) help in locating a large shipment of drugs so she can sell it off, get clean and start a new life. They show up at the home of a drug boss, Donnie Bigs. Liz shoots Donnie, and she demands that Jamie force the information out of his ghost. Jamie does so, but then tries to run away from her. When Liz manages to grab him, in fear for his life, Jamie calls out to Kenneth to help. The deadlight appears and stops Liz. She becomes crazed and falls to her death. Before the demon leaves, he warns Jamie that if he wants to get rid of him once and for all, they will need to re-engage in a battle of wills, but this time he'll be ready fore him.

Later, when Jamie is 18, Uncle Harry finally passes away. Jamie goes to the care facility and talks to Ghost Harry. He asks who his father is, and Jamie learns that Harry is his father (which means Jamie was born of incest). Jamie then turns away, not wanting to know more. He wonders if he will someday also have Alzheimer's (a hereditary disease), but decides not to take the test to find out until "later". Jamie also knows that someday he will likely have to face down the demon once again, but decides to leave that problem for "later" and live his life.

Later, by Stephen King, came out earlier this month. I started getting into Stephen King books about two years ago, but have really started appreciating his books and stories. They’re at times a little hit and miss, but I have to say I love how readable his books are and how much variety there is in his plots.

Later, for me at least, was a hit. It’s a page-turner from beginning to end. Later deals with a boy with the ability to see dead people. This is revealed in the first chapter of the book, so no, it’s not a spoiler. If I had to guess, maybe they didn’t mention it on the cover to avoid sounding like a rip off The Sixth Sense? Who knows.

Either way, rest assured that this book is nothing like that. Jamie knows he sees dead people and in most cases it’s not a huge deal. However, because the ghosts are compelled to answer his questions honestly, he gets drawn into a police investigation, and the story continues from there.

It’s a quick and snappy, plot-heavy book that clocks in at a svelte 272 pages. I’ve struggled through some entertaining, but perhaps overlong Stephen King novels until now, and I have to say, I strongly prefer the slimmed down version of his writing.

King enhances the “creepiness” of the book by narrating it in a light and matter-of-fact tone, but occasionally throwing in a detail that hints at something darker and a bit foreboding. As Jamie grows up, the novel grows darker as he’s faced with some uncomfortable truths and his abilities lead him into dangerous situations.

And while this is definitely a page-turner, it’s a testament to King’s skill that even with all that plot twisting around, he does manage to create moments of gravitas.

As a half-joking side note, I found it interesting (?) that one part of the book involves someone ghostwriting a book for a popular novelist. The book is published and no one suspects a thing — what are you trying to tell us here, Stephen? (UPDATE — I just read Billy Summers, and at one point the main character tells another character to write the ending to a book, saying that it should be easy to emulate the style of it. Hmmm. The plot thickens. I’m still half-joking, but now I’m also intrigued.)

One caveat I’d give to people interested in this book is that the “Hard Case Crime” imprint that published book might lead some people to think that this is a mystery-slash-detective novel. It’s not. It’s a horror thriller-slash-suspense novel that happens to involve a police investigation in one part.

On a separate issue, whenever a book mentions politics, I feel compelled to mention it, mostly because I know some people do not like to have it thrust upon them by surprise. As such, here’s my warning: there is one chapter where King discusses the differing politics of two of the characters, one liberal and one conservative. I think most would consider King to be liberal, and you can tell based on how he narrates this section. It’s not a major part of the book at all, just a page or two in passing, but I’m just letting people know so they can judge whether they want to skip this book.

It really doesn’t need to said that King is obviously a very experienced and prolific writer with a firm grasp of his craft. His skill can be seen in how effortless the prose, pacing and story feels in Later.

This is a very quick and snappy horror story with some thriller-slash-mystery elements, and it’s something you can easily read in one afternoon, maybe two. It’s almost more of a novella than a full-fledged novel. If you’re a Stephen King fan, definitely go for it. If you’ve never read one of his books, but are curious, this could be one to consider to help you gauge whether you’d like his other works as well.

I think, at worst, Later could be accused of being a bit forgettable; this book is not going to change your life. But it does manage to carry a bit more weight than your average page-turner, and it’s a great read for someone looking for a fast-paced book to dive into that’ll easily draw them in.

I had to stop listening to the audiobook because I actually found the narration a little too fast and mumble-y. (I’m someone who typically listens to audiobooks at normal speed. I don’t like to miss small details since I’m trying to write up reviews and explanations of these books.)

I think it’ll be serviceable for most people, but if you’re unsure or certainly hard of hearing at all, make sure to listen to a sample first before buying to see if you think his narration works for you.

Hear a sample of the Later audiobook on Libro.fm.

Read the first pages of Later 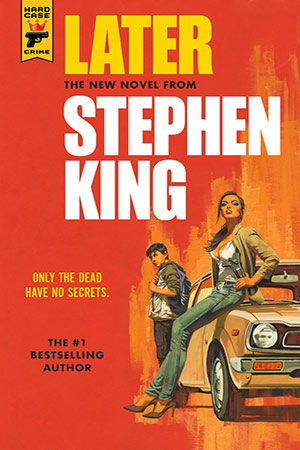