Book review and synopsis for The Institute by Stephen King, a thriller about a telekinetic kid who is kidnapped by a sinister organization.

Luke Ellis is a child prodigy as well as a boy with mild telekinetic abilities. One night, he's take from his home and finds himself in the hands of The Institute, a sinister and ruthless government organization who has been kidnapping kids for their telekinetic and telepathic abilties. They see the children there as test subjects to be exploited for their abilities.

But Luke has another talent, his intellect, and is determined to survive. Luke must grow up quickly and get help from the other kids as he wages his battle against the evils of the Institution.

Tim Jamieson is an ex-cop who impulsively decides to hitchhike to New York, but ends up stopping in DuPray, South Carolina and taking a job as a night knocker (patrolman). Meanwhile, in Minneapolis, Luke is a 12-year-old prodigy as well as a boy with mild telekinetic abilities who is kidnapped.

Luke is taken to a facility called The Institute where many kidnapped kids with telekinetic and telepathic abilities are being held. The facility is divided into two sections. In the Front Half, kids are tested on and tortured to enhance their abilities. In the Back Half, kids are put to work to be used as psychic drones to kill certain targets. The process gives them headaches which eventually destroy their minds, becoming so-called "gorks". Luke makes many friends including Avery, a 10-year-old boy with very strong telepathic powers.

Luke helps Maureen, a housekeeper on the staff, who then helps to him to escape and then kills herself. She also gives him a flash drive with video proof of the atrocities at the Institute. Luke ends up in DuPray, where he meets Tim and shows him the flash drive regarding The Institute. People from the Institute show up to take Luke back. They are subdued, but many are left dead. Luke and Tim then head back to The Institute to save the rest of the kids, and Luke negotiates with the Institute to stall for time.

Back at the Institute, Avery and the other Back Half kids have learned how to collectively use their powers to fight back. They also realize that the gorks help to enhance their powers. However, the Back Half kids are now trapped. They also realize there must be more kids like them around the world and more Institutes around the world that are working together.

As Luke and Tim arrive at the Institute, Avery uses his powers to connect with all the other Institutes and it causes the building to levitate. Avery has to stay to maintain the connection and the other Back Half kids try to escape using their greatly enhanced powers. They find out the Front Half kids have been gassed by the staff. When the building falls back down, it crushes any people remaining in the building. In the end, only a few staff are alive and a handful of kids. Luke, Tim, and a few other Back Half kids are alive, but Avery and many, many others are dead. The survivors leave the staff there and drive off.

Three months later, a man with a lisp (the boss of the people running The Institute), shows up at the farm Luke and Tim and the others are at. He explains that Institute was necessary for the safety of the world. Elsewhere, there are precogs (people with precognitive abilities) who make predictions of the future, and then the Institute kids are used to eliminate the future threats that the precogs identify. Luke tells him this system is flawed since mathematical models suggest that precognition is most accurate in the immediate future, not in the distant future. The further out time-wise you go, the more random it becomes. The man with a lisp disagrees and leaves.

The other kids are slowly returned to whatever family they have left (the Institute murdered their parents), but Luke stays with Tim. The book ends with Luke thinking about what a hero little Avery was.

Stephen King has released a new novel, this time focusing on a sinister organization called The Institute and the abduction of a young boy with telekinetic abilities.

I was never particularly curious about Stephen King until I watched the Castle Rock adaptation. After that, I read the Outsider, which I thought was just okay, but I still wanted to give a different book of his a shot. The Stranger Things-esque vibe of The Institute appealed to me, so I picked this up since I had an Audible credit I needed to use up anyway (my review of the audiobook is below too).

(As a sidenote, I also recently watched Netflix’s In the Tall Grass, based off of a Stephen King and Joe Hill (his son) novella. I thought it was an interesting mind-bendy kind of movie.)

The Institute is more of a thriller than a horror novel, I think, but it’s a fun thriller that also delves into the themes of how power can be abused and the dangers of dehumanizing people. With the United States currently holding kids in cages in the name of deterrence, this book’s premise is clearly not as far fetched as it initially sounds.

In terms of the plot overlaps with Stranger Things, they both have kids with telekinetic powers who are being used as test subjects by an evil organization. So, there’s definitely some plot similarities, but they also diverge pretty significantly as well so you can easily enjoy both.

In the Institute, Stephen King showcases his ability to dream up intriguing premises and write convincing characters that encompass a broad range of ages and backgrounds. It’s a varied and colorful cast that helps to enhance the realism of his fantastical premises.

The audiobook recording for The Institute is fantastic, by the way. The narrator’s voice is easy to listen to and the voices he uses are different enough to help distinguish voices, but subtle enough so as not to become comical. This guy is really great at doing voice parts even the female ones. I thought it was just perfect. I’d highly recommend it.

If you’ve seen my comments on a lot of other audiobooks, you might know that I’m extremely picky about audiobook narrators, so this is high praise coming from me. Thanks to the stellar narration, I enjoyed this book the whole way through.

I enjoyed the Institute a lot, though I partially attribute this to the stellar audiobook. It’s a fun thriller that touches upon very timely themes and moral questions that we currently face. While it doesn’t really do a deep dive into the nuances of these issues or anything, it does help to enhance the book’s relevance and realism.

Ultimately, the reason to read this is because it’s a well-paced and solidly written thriller with a great cast of characters. I’d recommend it for King fans (obviously) and fans of thrillers in general.

See The Institute on Amazon.

Read the first pages of The Institute

See Everything We Know About the 'The Institute' Adaptation 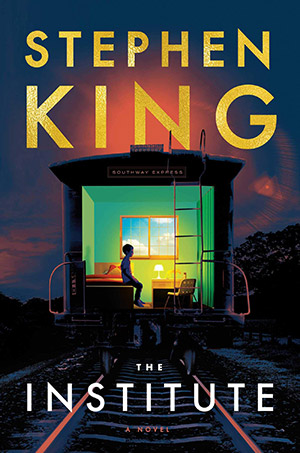 From the Publisher
In the middle of the night, in a house on a quiet street in suburban Minneapolis, intruders silently murder Luke Ellis’s parents and load him into a black SUV. The operation takes less than two minutes. Luke will wake up at The Institute, in a room that looks just like his own, except there’s no window. And outside his door are other doors, behind which are other kids with special talents—telekinesis and telepathy—who got to this place the same way Luke did: Kalisha, Nick, George, Iris, and ten-year-old Avery Dixon. They are all in Front Half. Others, Luke learns, graduated to Back Half, “like the roach motel,” Kalisha says. “You check in, but you don’t check out.” In this most sinister of institutions, the director, Mrs. Sigsby, and her staff are ruthlessly dedicated to extracting from these children the force of their extranormal gifts. There are no scruples here. If you go along, you get tokens for the vending machines. If you don’t, punishment is brutal. As each new victim disappears to Back Half, Luke becomes more and more desperate to get out and get help. But no one has ever escaped from the Institute.
Show More
Read an Excerpt
See it on Amazon Book Depository