Main / Books / If It Bleeds

Book review and synopsis for If It Bleeds by Stephen King, a (mostly) delightfully creepy collection of novellas.

If it Bleeds is a collection of four unrelated novellas. The first two, Mr. Harrigan’s Phone and The Life of Chuck, both deal with characters approaching the end of their lives.

The third story, the titular If It Bleeds, is basically a mini-sequel to The Outsider with Holly Gibney as the main character. The last one, Rat, is about a writer who strikes a Faustian bargain in order to write a novel.

In Mr. Harrigan's Phone, Craig is a boy who works for Mr. Harrigan, a very wealthy retiree. Mr. Harrigan gives Craig $1 lotto-scratchers on holidays. When Craig wins $3,000, he buys Mr. Harrigan an iPhone, which Harrigan becomes very attached to. When Harrigan passes away, Craig sneaks the phone into Harrigan's jacket before he is buried. A few months later, Craig gets beat up by a bully. Craig calls the phone to hear Mr. Harrigan's voice for comfort, and he leaves a voicemail about the bully. Mysteriously, the bully is found dead from suicide the next day. Craig wonders if it was a coincidence. He later switches to a new phone, and he finds he's no longer able to contact Mr. Harrigan's phone.

The Life of Chuck consists of three acts, told in reverse. In Act III: Thanks, Chuck!, Marty Anderson is walking around as the world is on the brink of destruction. The internet has stopped working, the electricity cuts out, natural disasters are ravaging the world and the earth's rotation is slowing. Oddly, there are ads dedicated to someone named Chuck Krantz, thanking him for "39 great years" everywhere. The story then introduces Chuck, who is dying in a hospital bed. His brother-in-law tells Chuck's son a theory that people contain whole worlds inside them that fall to ruin when they die. As Chuck breathes his last breath, Marty's world goes black.

In Act II: Buskers, Chuck walks down a street in Boston. He has nine months to live, but doesn't know it yet. There's a street musician busking with his drumkit. Chuck starts to dance and a crowd forms. A woman joins in and together they dance a joyous, impromptu dance. A huge crowd gathers, cheering and offering tips. Later on, as the disease ravages Chuck, he'll remember this day and think that things like that are why God made the world.

In Act I: I Contain Multitudes, Chuck is sent to live with his grandparents, Sarah and Albie, after his parents are killed in a car accident when he is 7. Sarah teaches Chuck to love dancing. One day, Albie drunkenly tells Chuck that the cupola in their house is locked because he sees ghosts of people there before they die. Albie hints that he has seen Sarah and something involving bread. Soon, Sarah dies of a stroke while she is buying bread.

Later, Chuck goes to a school dance and shows off his moves with a girl, Cat, while the rest of the students cheer them on. Afterwards, Chuck is twirling around happily when he scratches his hand on a fence, leaving a crescent-shaped scar. Chuck later lies about how he got the scar (saying that Cat's boyfriend shoved him) because the truth of why the scar matters is a story he cannot tell. When Chuck is a junior, Albie passes away. Chuck gets the key to the cupola and goes up there. He sees a vision of a man with a crescent-shaped scar on his hand in a hospital bed.

In If it Bleeds, a bomb is dropped off at a middle school in Pennsylvania, killing and injuring scores of people. Holly Gibney, a private investigator, sees the news report and looks into it. She begins to suspect that a local reporter, Chet Ondowsky, is a supernatural similar to the Outsider, a creature she tracked down in a separate case not too long ago. The creatures feeds off pain. Holly learns of an elderly man, Dan Bell, who has drawn the same conclusion. Dan has tracked this creature for decades, and Dan has determined there are at least two "templates" of faces the creature adopts. For the first one ("Chet"), Dan has recorded at least 17 iterations of the same man, and the other (which Holly nicknames "George") is the man who dropped off the bomb at the school.

Holly contacts Chet and demands a meeting. (She makes a series of recordings as a back-up plan and sends it to Detective Ralph Andersen in case things don't go her way.) She tells him she wants money or she will expose him, but actually plans to just shoot him. She invites him to her office, but two of her concerned friends (Jerome and Barbara Robinson) have tracked her there. Chet attacks Jerome and tries to use Barbara as a hostage. However, after an extended scuffle and thanks to some fiddling with the elevator, Holly pushes Chet down the elevator shaft and kills him. Later, though, when Holly goes to visit her Uncle Henry (who has Alzheimer's and can barely recognize her), he greets her with a clear "Hello, Holly" which is the same greeting Chet once used.

In Rat, Drew Larson goes up to his late father's cabin to write, after getting an idea for a novel. Drew has published several short stories, but has never completed a novel. His last attempt resulted in a mental breakdown. At the cabin, writing initially goes smoothly, but goes downhill quickly. He becomes severely ill, a storm comes raging through and soon his novel is unraveling. In the storm, Drew saves a rat from the rain and goes to sleep. When he wakes, the rat is speaking and offers him a deal: the rat will help him finish his novel, but in return, someone Drew cares about will die. The rat suggests Drew's friend and department head, Al. Drew accepts, telling himself it's probably just a dream anyhow. The next day, Drew writes swiftly again. When he gets home, Drew checks that Al is fine, and Drew soon completes the book.

Months later, Drew sells the book at auction. While he and his wife celebrate, Drew gets news that Al and his wife are dead from a car accident. Drew is initially upset and goes back to the cabin to confront the rat, but it's pointless. Life goes on, and Drew considers that things basically worked out for him.

Stephen King’s If it Bleeds is a collection of four novellas that was released in April 2020. I’ve been getting really into watching Stephen King adaptations now that I’m spending all my time sheltered-at-home, so it’s turning me into more and more of a Stephen King fan.

Not all of his stuff is to my tastes, but I was eager to check out these novellas, especially since one of them (If It Bleeds) relates to The Outsider which I previously read and liked.

I thought the three shorter novellas were great. The first two stories, especially, are fantastic. They both deal with characters that are approaching the end of life (Alzheimer’s and car accidents also crop up a lot in all these stories). They are imaginative, but thoughtful, while retaining King’s trademark creepiness. They were exactly what I was hoping for when I picked up this book. The first one, Mr. Harrigan’s Phone, is about a boy who calls his recently deceased employer’s cell phone to hear the man’s voice (on his voicemail message) for comfort. To the boy’s shock and horror, the boy receives a response.

The second one, The Life of Chuck, is kind of a weird mix of genres. There’s three Acts and even though they are technically part of the same story, they each sort of serve as separate stories too and fall into different genres. Act I (Thanks Chuck!) is basically a sci-fi story. Act II (Buskers) is a slice-of-life story. And Act II (I Contain Multitudes) is basically a horror/ghost story. I think it’ll seem a bit all over the place to some people, but I really loved it.

The last one (Rat) is also solid and worth a read. It’s about a writer who strikes a Faustian bargain in order to write a novel. It’s one where I would have loved to have someone to mull it over with after I read it.

However, the third one, If it Bleeds, was easily the weakest story for me. I did not like it at all. It’s too meandering, reads like a more boring version of The Outsider, and has too many plot holes. It accounts for about half of this book, and it feels like a short story that got really, really stretched out. (To be fair, plenty of other reviewers liked it, but I did not.)

It seems like King was trying to write a sequel to The Outsider, but there wasn’t enough material so he gave up and turned it into a novella. I didn’t find it creepy or interesting. The last half of it is especially boring and nonsensical, as Holly Gibney, the main character, cooks up a very poorly conceived plan to deal with the villain of the story. Also, this story is probably better if you have already read The Outsider.

It didn’t help that I listened to the audiobook and the narrator is a man, despite the story being from Holly’s perspective. All of Holly’s dialogue is in the same annoying, high-pitched, strained voice. Why not just have a woman narrate?

I loved the first two stories, loathed the third one (If It Bleeds) for all the reasons stated above, and really enjoyed the last one. Does that count as me recommending this?

Despite strongly disliking If it Bleeds, I liked the other stories enough that I think most King fans will still enjoy this collection.

As a sidenote, I have no clue why there is a cat on the cover of this book since there are zero cats in any of the novellas. Can someone else explain this? I know there’s a rat on its nose which makes sense, obviously, but what’s with the cat? I’m perplexed.

See If It Bleeds on Amazon.

Read the first pages of If It Bleeds 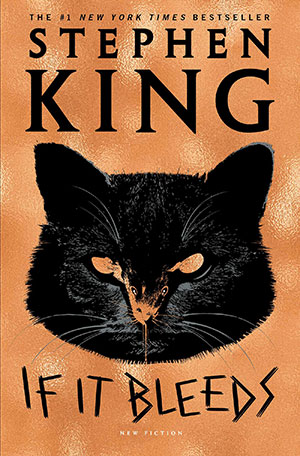 From the Publisher
From #1 New York Times bestselling author, legendary storyteller, and master of short fiction Stephen King comes an extraordinary collection of four new and compelling novellas—Mr. Harrigan’s Phone, The Life of Chuck, Rat, and the title story If It Bleeds—each pulling you into intriguing and frightening places. The novella is a form King has returned to over and over again in the course of his amazing career, and many have been made into iconic films, including “The Body” (Stand By Me) and “Rita Hayworth and Shawshank Redemption” (Shawshank Redemption). Like Four Past Midnight, Different Seasons, and most recently Full Dark, No Stars, If It Bleeds is a uniquely satisfying collection of longer short fiction by an incomparably gifted writer.
Show More
Read an Excerpt
See it on Amazon Book Depository