Hamnet by Maggie O'Farrell, A story about Shakespeare's marriage and the death of his son.

Hamnet opens with some historical notes. A couple in Stratford had three children, twins Hamnet and Judith, and daughter Susanna. Hamnet, died in 1596, aged eleven. Roughly four years later, his father writes the play Hamlet (a name that is interchangeable at the time with name Hamnet).

As the story unfolds, the book tells a fictionalized story of William Shakespeare and his wife Agnes and the death of their son Hamnet.

(The book opens with a few historical notes. A couple in Stratford had three children, twins Hamnet and Judith, and daughter Susanna. Hamnet, died in 1596, aged eleven. Roughly four years later, his father writes the play Hamlet, interchangeable at the time with name Hamnet.)

The chapters jump back and forth between two timelines. In 1596, Hamnet is a young boy whose twin sister Judith has suddenly fallen ill. Hamnet searches for an adult, but the only person home is his drunk and abusive grandfather John Shakespeare. John is a disgraced glove maker, due to his illicit wool trading, among other things. Hamnet's father (William Shakespeare, though he is never named in the book) is in London, as usual. Hamnet's mother, Agnes, is away. He falls asleep next to Judith, crying.

In an earlier timeline, John Shakespeare owes a debt to a (deceased) sheep farmer. John and the farmer's (second) wife Joan have an arrangement for William to work off the debt by tutoring Joan's sons. It results in the tutor meeting Agnes. Agnes and her brother Bartholomew are the farmer's children with his first wife. Agnes has special abilities, where she is able to divine information about people, and she is also good with plants. Agnes and William fall in love.

In 1596, Agnes finally comes home and tries to treat Judith, confirming that she has "the pestilence" (the plague). The doctor shows up and warns them that no one is to leave the house until it has passed. When nothing works, Eliza (William's sister) writes to her brother in London to tell him to come home to say goodbye.

In an earlier timeline, Agnes becomes pregnant. John senses a business opportunity and strikes a bargain with Joan and Bartholomew regarding the debt, wool and Agnes. Soon, Agnes and the tutor are married. The baby, Susanna, is born. Agnes notices that her husband is unhappy as an errand-boy for his father. Agnes comes up with a plan to get John to send William to London. The plan works. Though Agnes is pregnant again, but William leaves for London, with plans to reunite once he is settled there.

An interlude traces the path of the disease. It involves a chance meeting of a glassmaker in Venice and a cabin boy on a ship. The cabin boy brings a disease-ridden flea onto the ship after interacting with a monkey in Alexandria. The pestilence ravages the ship. After the glassmaker loads his cargo in Venice, fleas end up in those boxes, which is unloaded in London. One box makes its way to a dressmaker. Her neighbor's daughter, Judith, is curious about it. The dressmaker lets Judith unpackage the disease-ridden box.

In 1596, Hamnet sees his dying sister and wants to trick death into taking him instead. He crawls into bed next to her. Agnes is soon surprised to discover that Judith is looking better, but Hamnet is barely breathing. She tries every remedy, but he dies.

In the earlier timeline, William sells some gloves to actors at a theater. Soon, he is acting (and later writing plays) and no longer dealing in gloves. In Stratford, Agnes is surprised to have twins, though she is worried because she has always known she would have only two children. Judith is the second one out, and she is weak and smaller than Hamnet. Agnes delays going to London until Judith is stronger, but Judith continues to be weak and sickly. The years pass, but the move to London never happens.

In 1596, William comes home to find Hamnet, not Judith, dead. Hamnet is buried. William is heartbroken. The house is full of reminders of Hamnet, and he is worried about the life he has built in London. William soon goes back to London and does not come home for a long time. Judith wonders if her resemblance to Hamnet is what keeps him away. Agnes grieves, too.

A year after Hamnet's death, William finally comes home. Agnes senses that he has been with other women. William apologizes for everything and decides to buy his family a house here in Stratford since it is clear that they will not be coming to London. He buys the largest house in the town, though he still only visits two or three times a year. As the girls grow up, Judith develops a love of plants like her mother. Susanna helps out with her father's affairs in terms of purchasing land, rental income, and other business affairs.

One day, Agnes learns that William has written a play (Hamlet) named after their son. Upset, Agnes goes (with Bartholomew) to London to find William. She finds him at the playhouse before a performance of Hamlet. As she watches the play, she realizes that her husband has written a play where the father is the one that dies instead of the child. In his play, "Hamlet"/Hamnet gets to live. The book ends with the last line that the ghost delivers, "Remember me".

Hamnet by Maggie O’Farrell (or, Hamnet and Judith in some markets) is one of books in recent memory that I’ve been genuinely really excited to read.

After reading Bill Bryson’s wonderful (non-fiction) biography of Shakespeare, I’ve been interested in reading more historical fiction about the famous Bard, but haven’t found much to catch my eye. I tried a couple that disliked enough that I gave on the pursuit for a while, but Hamnet has gotten great reviews and it sounded like a unique take on Shakespeare.

Hamnet is largely told with a focus on Agnes, the wife of William Shakespeare. (Anne Hathaway is the name that’s commonly used, but Agnes and Anne were commonly interchangeable at that time.) The death of Hamnet, their only male child, due to the plague features prominently in the story as well.

O’Farrell never actually refers to William Shakespeare by name, which helps to detach the story from all the mythology that comes with Shakespeare and his reputation. It also helps to reinforce that, although he is still a main character here, he’s not the main character.

O’Farrell’s Hamnet is a work of historical fiction, with a lot of emphasis on the word fiction. The reality is that what’s really known about Shakespeare is spotty at best (if you want to know more, I’ll reference Bryson’s Shakespeare biography here again), but it still makes for a delightful story to wonder about his life. (I also suspect that this story wouldn’t stand up to careful scrutiny about Shakespeare and all the details of his life, see the Historical Accuracy section below, but I’m not enough of a Shakespearean scholar to say for sure.)

Instead, facts serve as the rough contours of this book that gets filled in colorfully and vividly by this moving and beautifully written story. It’s not a complex or even terribly clever rendition of Agnes and William’s story, but O’Farrell tells it in a way that’s powerful and alive.

The character of William Shakespeare in this book is humanized and made smaller. I understand why O’Farrell might want to do that, to avoid writing yet another tribute to the greatness of the towering figure of the William Shakespeare. However, I have to admit that it wasn’t entirely satisfying to me. Unlike his portrayal in the book, ultimately, he wasn’t just a guy who became financially comfortable writing plays. Instead, he wrote masterpieces and a lot of them.

Apart from a very brief section where he plays a quick word game with his sister Eliza, there’s nothing in the book indicating that this is or was a brilliant person. Instead, he’s depicted as a disappointment to his parents, an absent father, a weakling and kind of an unmotivated loser in general, all of which made it hard for me to view this as a story that was about Shakespeare at all. I understand this wasn’t intended to be an origin story about William Shakespeare, but I also can’t imagine that this useless lump of a man described here would become the mythological creature that he is.

As a final note, even with those criticisms, Hamnet not even being longlisted for the Booker Prize still says a lot more about a deficiencies of the Booker Prize’s judges panel (in my opinion) than it does about Maggie O’Farrell’s newest novel. 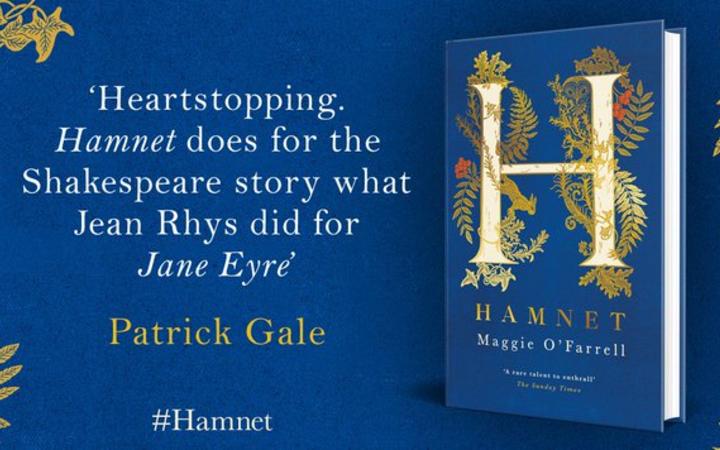 As mentioned previously, there’s definitely a lot of fiction mixed up in here.

For example, a colorful interlude in the book involves a petrified Hamnet and a doctor wearing the distinctively creepy beaked plague mask that you’ve probably seen before. The problem is, in the book this happens in 1596, and the design is commonly attributed to Charles de Lorme, chief physician to Louis XIII, who was born in 1584. It seems unlikely he designed it when he was 12. Furthermore, historians have noted that there’s no evidence the Plague Doctor costume was ever used in London. (It was primarily used in 17th/18th century Italy and France.)

I’m not a historian — not even a history buff, really — so if I can catch this fairly obvious mistake, I’m certain there are others in here as well.

Did any of this spoil my enjoyment of the book? Not really, but again, history buffs and Shakespearean scholars may feel differently.

Hamnet is a moving and uncomplicated tale about a marriage, a family and the loss of a child. The focuses on the character of Agnes is an unique spin on renditions of Shakespeare’s life.

I enjoyed the story quite a bit and there’s a lot to like about Maggie O’Farrell’s vivid and engaging version of Agnes and William’s story.

I found the portrayal of William Shakespeare here a bit unconvincing and I think there are likely some historical inaccuracies here, but it still works splendidly as a work of historical fiction due to O’Farrell’s storytelling abilities. It’s an intimate and emotional book that I think historical fiction lovers can appreciate.

Read the first pages of Hamnet 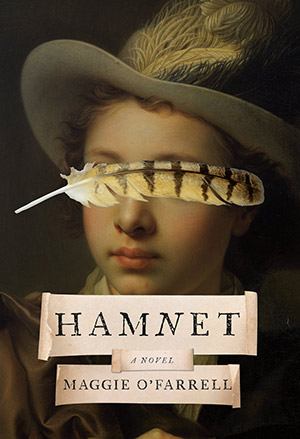 From the Publisher
A young Latin tutor—penniless and bullied by a violent father—falls in love with an extraordinary, eccentric young woman. Agnes is a wild creature who walks her family’s land with a falcon on her glove and is known throughout the countryside for her unusual gifts as a healer, understanding plants and potions better than she does people. Once she settles with her husband on Henley Street in Stratford-upon-Avon she becomes a fiercely protective mother and a steadfast, centrifugal force in the life of her young husband, whose career on the London stage is taking off when his beloved young son succumbs to sudden fever. A luminous portrait of a marriage, a shattering evocation of a family ravaged by grief and loss, and a tender and unforgettable re-imagining of a boy whose life has been all but forgotten, and whose name was given to one of the most celebrated plays of all time, Hamnet is mesmerizing, seductive, impossible to put down—a magnificent leap forward from one of our most gifted novelists.
Show More
Read an Excerpt
See it on Amazon
New Reviews
recent releases
New Posts
recently posted
Discussion and Replies