Shakespeare: The World as Stage

By Bill Bryson, A Concise and Well-Researched Biography

Bill Bryson’s Shakespeare: The World as Stage is a short and well-researched biography on the famous Bard, with some background on Elizabethan England thrown in for good measure.

I’ve been meaning to read something of Bryson’s for a long time and thought this might make a good introduction, especially since I did a lengthy project on Shakespeare back in middle school and have continuously heard contradicting “facts” about him since then. Bryson seems to have a consistently good reputation, and now I can see why. His biography of Shakespeare was an enjoyable, informative and subtlety well-crafted read. The relative short length of this book, he tells us, is due mainly to the fact that there’s little that’s really “known” about Shakespeare, especially his early life, though we do have an impressive amount of his works nowadays due the efforts of two of his colleagues at the time to put together a portfolio of his works, what modern Shakespeare academics refer to as the First Folio.

Bryson does an impressive job of explaining the evidentiary support for and against the various of theories about Shakespeare’s life and works and the conclusions that have been drawn, without making the book feel bogged down in minutiae. While many, many writers have penned works on Shakespeare (roughly 200,000 works if I recall correctly from the book), many seem to resort to some “artistic license” in describing facts since much of what we know about him is conjecture or just false. (Bryson is very, very dismissive of theories about alternative authorship regarding Shakespeare’s works and skewers most of the “facts” they rely upon to draw those conclusions.)

An example of something that seems like we all should know, but don’t is that the spelling of “Shakespeare” is not one Shakespeare himself was ever known to use, and it’s not entirely clear what’s the “correct” spelling since they played fast and loose with things like that back in Elizabethan England. The pronunciation of his name might not even be accurate. (The phrase “fast and loose”, by the way, comes from Shakespeare, along with a whole host of other phrases we commonly use today.)

While we know very little of the man Shakespeare himself, we luckily have a great many of his works. The novel touches a little upon the literary criticism that has taken place with regards to drawing conclusions about Shakespeare’s life (i.e. parsing the text to find “clues” to indicate what type of person Shakespeare was), but Bryson doesn’t seem to place a lot of value on these conclusions. Bryson sums all of this discussion up by quoting the Bard himself: “The devil can cite Scripture for his purpose.” — in other words, there’s enough of his works that you can find support for almost any conjecture if you try hard enough. It also describes the extent and efficacy they’ve had in recovering the true original form of his works. There’s a complicated history there and Bryson does a deft job at detailing out enough to give a general sense of the accuracy and quality of what we have today.

Bryson’s novel is one that would likely prove to be entertaining for most theater fans and those interested in European history, especially about that era. For example, he mentions that Elizabethan England is when and where the concept of comic relief came into play. The huge demand for new plays meant that in the frenetic pace, traditional rules of play construction were being discarded or overlooked and therefore the prior rule of only having tragic scenes in tragedies or of only having funny scenes in comedies was bent — resulting in the first instances of comic relief in tragedies.

The whole book is littered with facts and asides that lend it color and accessibility to the average reader. I would say one of Bryson’s strengths in this book is making compelling comparisons and drawing links and parallels to aid a non-Shakespeare scholar in finding this information interesting and relevant.

To wrap this up, I’ll say that I really enjoyed this little biography, and it reminded me of my days volunteering at the Shakespeare Playhouse Tavern in Atlanta; we’d go and help out a little, and meanwhile we’d watch the show and they’d give us these delicious hot apple cobblers with vanilla bean ice cream melting and oozing all over them. Yum. Ahem. But back to the book: history lovers or Shakespeare fans will be well-served by this well-written and very enjoyable read. I know I enjoyed it because upon finishing it, my two conflicting =mpulses were to read something else relating to Shakespeare as a point of comparison or to read more of Bill Bryson’s work. Either way, I couldn’t come up with much good criticism on this book, so I will just say that I liked it and leave it there. 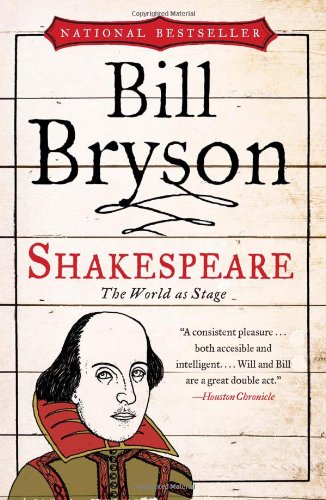 From the Publisher
illiam Shakespeare, the most celebrated poet in the English language, left behind nearly a million words of text, but his biography has long been a thicket of wild supposition arranged around scant facts. With a steady hand and his trademark wit, Bill Bryson sorts through this colorful muddle to reveal the man himself. Bryson documents the efforts of earlier scholars, from academics to eccentrics. Emulating the style of his famous travelogues, Bryson records episodes in his research, including a visit to a bunker-like basement room in Washington, D.C., where the world's largest collection of First Folios is housed. Bryson celebrates Shakespeare as a writer of unimaginable talent and enormous inventiveness, a coiner of phrases ("vanish into thin air," "foregone conclusion," "one fell swoop") that even today have common currency. His Shakespeare is like no one else's—the beneficiary of Bryson's genial nature, his engaging skepticism, and a gift for storytelling unrivaled in our time.
Show More
See it on Amazon
Share This
social & email
New Reviews
recent releases
New Posts
recently posted
Discussion and Replies