Main / Books / The Vanishing Half

Book review and synopsis for The Vanishing Half by Brit Bennett, a story about two twins living divergent lives.

The Vanishing Half follows the lives of two twin girls, both light-skinned Black girls, who run away from home at the age of sixteen. Desiree marries a dark-skinned Black man and has a child, while Stella lives her life passing as white. The book tracks their lives across generations, as their lives branch away from each other and yet remain intertwined. It's a story that explores the intricacies of identity, family and race in a provocative but compassionate way.

In Part I (1968), Stella and Desiree Vignes are twins from Mallard, Louisiana, a town full of light-skinned Black people, who run away from home at 16. Desiree always wanted to leave, but Stella isn't motivated to run away until they are pulled out of high school to work as cleaners. Desiree marries a dark-skinned man (Sam) and has a daughter, Jude. Meanwhile, Stella got a job as secretary while passing as white. However, one day she left, leaving only a note. Now, 14 years later in 1968, Desiree has returned home with her daughter to escape Sam's abuse.

Early Jones makes a living tracking people down and bounty hunting. He's offered a job (from Sam) to find Desiree. He accepts because he recognizes Desiree from when they were teenagers. Upon seeing her bruises, he lies to Sam and says he can't find her. Desiree also tells Early about Stella, and Early offers to find her. Together, they track Stella's location to Boston.

In Part II (1978), Jude is now in college at UCLA. As a dark-skinned girl who grew up with only light-skinned Black people, she has been bullied and excluded her whole life. She meets and falls for Reese, a southern boy who is transgendered. Reese wants to get surgery for his chest, so Jude gets a higher-paying catering job to help save money. One night at work, she sees a woman (Stella) and the shock makes her drop a bottle of wine.

In Part II (1968), we learn that Stella had married her boss, Blake Sanders, and they had moved away. They are wealthy and have a blond-haired, violet-eyed daughter, Kennedy. There is a Black family (Reginald and Loretta Walker, with their daughter Cindy) moving into their neighborhood, to everyone's displeasure. Stella befriends Loretta, but tries to hide it from others. One day, Loretta cuts off their friendship after Kennedy calls Cindy the n-word. Meanwhile, the Walkers are harassed and soon move away.

In Part IV (1982), Jude is now working while applying to medical school. She attends a friend's show where she meets Kennedy, recognizing her as the violet-eyed girl who was with the woman she that looked like her mother. Kennedy is pursuing an acting career, and she confirms that it was Stella. Stella is now working as an adjunct professor. She was depressed after the Walkers left and ended up going back to school. Jude and Kennedy get to know each other, but when Kennedy drunkenly insults Jude, Jude angrily tells her the truth about Stella and Mallard.

In Part V (1985), Kennedy and Jude end up meeting again in New York. Jude and Reese are there for Reese's surgery. Jude gives Kennedy a photo of their mothers. Kennedy ends up confronting Stella with the photo, but Stella lies, to Kennedy's frustration. Stella has always been secretive, but now Kennedy knows her mother has been lying to her. Kennedy moves to Europe.

In Part VI (1986), Stella goes home in order to ask Desiree to tell Jude to leave Kennedy alone. Stella has not seen her daughter since the incident with the photograph. At home, Stella learns that their mother Adele now has Alzheimer's. On seeing Desiree again, Stella asks for forgiveness. They hug and they catch up, but then Stella sneaks out at night to leave and return to her life. Stella also gives Early her wedding ring to sell off for money to help with Adele's care. Soon after, Kennedy finally decides to move home. When Kennedy asks about the ring, Stella is happy she's back and tired of lying and finally tells her the full truth. However, Stella asks Kennedy not to tell her father (Stella's not planning on changing her life).

Adele passes away, and Jude and Reese go home to attend the funeral. Jude is still in touch with Kennedy and lets her know, though their mothers do not know they speak. Desiree and Early move to Houston.

The Vanishing Half by Brit Bennett was on a lot of lists for highly anticipated books for 2020, but now it’s been picked up for an HBO limited series in a 7-figure deal. I really enjoyed this book, and I think it would be so fantastic as a television series, so I’m looking forward to when that happens. But I think this book is worth reading before then!

I was surprised how quickly I found myself drawn into this story. Bennett’s writing is straightforward, but descriptive in the right places. There’s not a lot of filler, which I generally prefer, and the plot moves forward at a pretty steady clip. I more or less read it straight through, with some breaks to run errands, eat and walk my dog.

It was also an unexpectedly effortless read, considering the somewhat heavy topics in the book. I knew based on the reviews that it would likely be a book with good insights on race, but I was surprised how much I enjoyed the story even apart from that. It’s a multilayered story about identity, family and the secrets we keep.

In the course of the story, the Vanishing Half ties in a number of characters with contrasting experiences. Jude’s story is that of a dark-skinned young woman coming of age and discovering her identity. Stella is a light-skinned Black woman passing as white, and Desiree is a light-skinned Black woman who chooses to maintain her Black identity. Kennedy grows up believing she is entirely white. And Reese is transgender, while Barry dresses in drag just a few nights a month.

The characters are faced with limitations and hard decisions as they are forced to choose their identities. In making those choices, the Vanishing Half also contemplates the things that people must hide from those that they love, the sacrifices they have to make and the things they have to do to keep those identities safe from others who wouldn’t accept it. As I was reading it, the resounding question through all of these disparate yet similar obstacles was, why should any of this be necessary?

The Vanishing Half is set a few decades in the past, but Bennett uses her premise to explore a number of very contemporary issues about race. For example, Stella ends up living in a white neighborhood, filled with the type of people who might support Dr. King’s ideas, but who also don’t want Black people living in their neighborhood.

While outright racism like that is less blatant now in 2020, there are plenty of supposedly “woke” liberals nowadays who still wouldn’t consider marrying outside their race (most will make an exception for a fling or hookup) and whose social circles consist entirely of other white people, with maybe one token Black friend (often bi-racial and almost always someone of means) added on.

Mostly, I just think this is just a solidly compelling drama that wraps in a lot of issues about identity, family and race in a way that feels thoughtful and not too heavy handed. 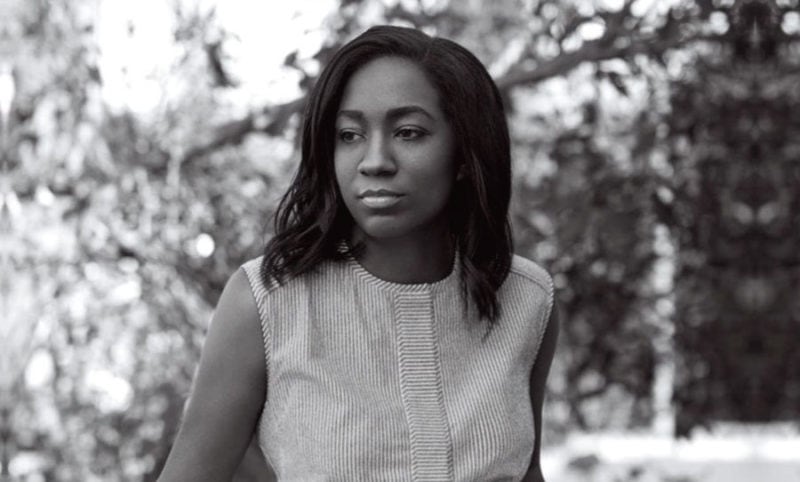 The Vanishing Half Audiobook Review

I listened to part of the audiobook which Shayna Small narrates, and thought it was just okay. The timbre of the woman’s voice didn’t really appeal to be, I found it to be a bit thin, but there was nothing objectively wrong with it.

You can take a listen to the clip on Amazon to see if it appeals to you, but it wasn’t to my taste personally.

The Vanishing Half is a powerful, timely and very human story about identity and race. I very much enjoyed this book the whole way through. There are some books that I keep reading after it’s no fun because I know it’s good for the mind, but this is not one of those books.

It would be such a great book club book because of the perspectives it works into the narrative. I really, really wish I had a group to discuss this book with right now. Mostly I’m curious what others from different backgrounds would think, since depending on people’s experiences you may view these characters and the decisions that they make differently.

Beyond that, this would be good for people who are looking for a novel to help them understand some of the issues surrounding race (and even transgender issues). It also works as a general work of fiction for those who like books about personal journeys, coming of age stories and narratives about self-discovery.

The main group of people I’d be less likely to recommend this book to is those who are well versed on issues about race and who are specifically looking for a book to further their understanding and challenge their views. While this book does a good job of telling a powerful and meaningful story, as far as issues surrounding race goes, I think most of the territory this book covers will be familiar to that type of reader. (I’d actually point them to Ta Nehisi Coates’s The Water Dancer, if you’re looking for a recent fiction release in that vein.)

What do you think? Have you read The Vanishing Half or would you consider reading it? Leave your thoughts below!

See The Vanishing Half on Amazon.

Read the first pages of The Vanishing Half

See Everything We Know About the 'The Vanishing Half' Adaptation 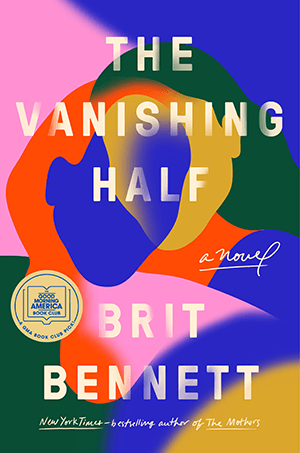 From the Publisher
The Vignes twin sisters will always be identical. But after growing up together in a small, southern black community and running away at age sixteen, it's not just the shape of their daily lives that is different as adults, it's everything: their families, their communities, their racial identities. Many years later, one sister lives with her black daughter in the same southern town she once tried to escape. The other secretly passes for white, and her white husband knows nothing of her past. Still, even separated by so many miles and just as many lies, the fates of the twins remain intertwined. What will happen to the next generation, when their own daughters' storylines intersect? Weaving together multiple strands and generations of this family, from the Deep South to California, from the 1950s to the 1990s, Brit Bennett produces a story that is at once a riveting, emotional family story and a brilliant exploration of the American history of passing. Looking well beyond issues of race, The Vanishing Half considers the lasting influence of the past as it shapes a person's decisions, desires, and expectations, and explores some of the multiple reasons and realms in which people sometimes feel pulled to live as something other than their origins.
Show More
Read an Excerpt
See it on Amazon Book Depository