By Erin Morgenstern, A story about an underground sanctuary for stories and storytellers

The Starless Sea by Erin Morgenstern has been one of this year’s most anticipated releases, largely due to the popularity of Morgenstern’s first novel, The Night Circus. I didn’t love the Night Circus as much as some other people, but I was really curious about what Morgenstern would dream up in her second novel.

Also see the Full Plot Summary & Explanation for The Starless Sea (spoilers). For the spoiler-free version:

The Starless Sea tells a tale about an underground labyrinth that serves as a sanctuary for stories and storytellers. It’s located in a place called the Starless Sea.

It’s also about a young man who finds a book of nested stories, including one that is about him. As he begins to investigate this mysterious book and his link to it, he finds himself drawn deeper and deeper into this place of pirates, lovers, secrets and stories.

The Starless Sea tells an inventive story dedicated to a love of stories and peppered with a range of literary references (or at least literary name-checks). It’s a book filled with fable-like stories, intertwined tales and vividly imaginative places and things.

As discussed in the next section, there’s a number of things I didn’t think ended up working in the Starless Sea, but even still there’s a lot to be said for what Morgenstern was trying to do with it. From the ruminations on the permanence or impermanence of stories, to the wildly imaginative world and the many tributes to power of stories and the imagination, Morgenstern has offered up a unique and inventive follow-up to her debut novel that many will find thought-provoking and inspiring.

When I first started to see how the inter-related myths and fables of the book plays into the plot, I was delighted. It felt interesting and unique, and I thought it was fantastic. However, at some point the plot gets consumed by its own conceit, and the characters get lost in the process. Apart from wanting to be with someone they love, very few of the characters have any other motivations or other personality traits. It makes for very flat character arcs and nearly non-existent emotional journeys across a lengthy book.

Initially, the inter-related stories are charming, but at some point it gets overwhelming, and there’s not much to the story beyond that. Towards the latter half of the book, there’s a lot of characters sort of just wandering around aimlessly, speaking in metaphors and riddles and things happening for no apparent reason. Even once you get the gist of what the general idea is, it continues to drip-feed cryptic half-explanations and random plot events across hundreds of pages. There doesn’t seem to be any story-based reason for many things to happen or for the information to be dragged out across the chapters or for characters to withhold information, they just do.

On a more substantive level, I think the aimlessness of the plot means that the book undermines a lot of its own message. One of the ideas it explores is the relationship between choice and “fate” and how that plays into a story. In the Starless Sea, there’s junctures where Zach has to choose certain paths. But when Zach, a character with very few discernible motivations, chooses a doorway for no particular reason, to me that says very little about either choice or fate. Instead, it just reminds me that characters wandering around randomly doing random things don’t make interesting stories and is kind of pointless.

As a point of comparison, think about the Harry Potter novels where Harry wonders whether he was sorted into the correct house. The sorting hat thought Harry was suited for Slytherin (indicating one personality type), but Harry chose a different house by force of his own will. The point being that ultimately you decide the person you want to be. This is a much more powerful illustration of fate and choice than if a nondescript character randomly chooses a house for no reason.

The book relies on extremely heavy-handed ways of trying to make its points or make connections between things (possibly because it doesn’t trust its reader, or possibly because the story isn’t told in a way where it would be coherent otherwise). It explicitly reminds you that something is a metaphor or that someone has “chosen a path” or emblazons symbols on everything to try to form connections between things. By the end, I was inwardly groaning anytime I saw the words “bee”, “sword”, “door” or “key”. I’m not kidding, those four words come up over 1,500 times in this book.

Morgenstern explores some genuinely interesting (albeit a bit meta) ideas about storytelling and tries to structure the story in a unique and imaginative way. But the lack of a strong emotional beat, the aimless plot and the overwrought execution (I think this is best described as being “over-engineered”) drags the story down. Instead of being whimsical and adventurous, there’s a tediousness to the whole exercise and a lot of it feels extraneous.

The Starless Sea is supposed to be a book about storytelling, but in its quest to seem clever, it forgets what good storytelling is about. That’s perhaps a bit harsh, but I was honestly pretty frustrated as the story wore on.

Still, even if I didn’t enjoy this book as much as I hoped I would, I have a hard time dismissing it entirely. I think Morgenstern was trying to do something interesting with it, and there’s a lot of inventive elements in the story that she deserves credit for. I like when people strive to do creative things in storytelling, even if it doesn’t always pan out. For this reason, I would consider reading another book of hers in the future.

The section-by-section summary & explanation can be found here, and the quick synopsis is below.

In Book I, there is a book (Sweet Sorrows) that consists of a series of nested stories about the Starless Sea, an underground sanctuary dedicated to storytelling. The first story is about a pirate and his lover, and all these stories describe characters that later reappear in the story (a boy in a library, a boy finding a door, a little girl in a forest, etc.). One story describes how Time fell in Love with Fate, which disrupted the flow of time. Fate was then destroyed. An owl eats its eyes, but its heart was saved. It is interspersed with a main narrative. Zach finds the book and recognizes that one of the stories describes him as a boy finding a portal to the Starless Sea. Zach starts to research it, but others (the Collector's Club) are after the book, too. Zach meets Dorian, who can get him to the Starless Sea. Zach gets to the Harbor of the Starless Sea, but Dorian is captured (by the Collector's Club and a woman named Allegra) in the process. Book II (Fortune & Fables) contains stories relating to the first book. One involves the Moon falling in love with an Innkeeper. Others involve the Owl King (the owl that ate Fate's eyes). (In an interlude, we learn that the pirate and his lover have lived many lives, but are torn apart each time.) It is interspersed with the continuation of Zach's story. Zach meets a woman named Mirabel at the Harbor, and together they rescue Dorian. Zach learns that the Collector's Club is trying to destroy portals and prevent others from accessing the Starless Sea in order to protect it. Book III (The Ballad of Eleanor & Simon) describes two people, Eleanor (the girl in the forest) and Simon Keating, who fall in love, but they exist in different times. They meet due to a space in the Harbor where time is disrupted. Eleanor gets pregnant, but Simon is never able to find her after that. Meanwhile, Zach finds the book The Ballad of Eleanor & Simon. Mirabel shows Zach the Starless Sea, which is now an abyss because it has been declining for a long time. It used to be vibrant place, but now only a few people are left. He also learns that Mirabel and the Keeper of the Harbor are lovers. Book IV, Zach hears a continuation of the Moon's and the Innkeeper's story. The Moon asks Death and Time for help to stay with the Innkeeper. Time agrees and moves the inn to a place separate from Time where the Moon can visit the Innkeeper. In return, Time asks the Moon to find a way to reunite it with Fate. Soon after, the Harbor starts falling apart. Allegra shows up to attack Dorian, and she drags him down into the abyss. In Book V, the Keeper explains that he and Mirabel have been lovers over many lifetimes. He is timeless, but he continually loses Mirabel who returns in other forms. Zach realizes that the Keeper is the pirate/Time and Mirabel is the lover/Fate. (Mirabel is also Eleanor's daughter). Zach and Mirabel head into the abyss supposedly to rescue Dorian (but Mirabel has an alterior motive, explained later). Zach and Mirabel are separated, but Simon saves Zach. Zach finds a paper star with his fate written on it, but he throws it away. Meanwhile, Dorian is rescued by Eleanor who travels on a ship in the Starless Sea. (Allgera died from the fall). Eleanor brings him to the Inn. There, the Moon presents Dorian with a box with Fate's heart in it. In Book VI, much time has passed, Zach has been wandering, and finally comes across Dorian. Dorian takes his sword and stabs him in the heart. Mirabel and tells Zach that he (and his death) was the key to ending the story so that things can change. (Meanwhile, Zach's friend Kat has been looking for him, wondering what happened. She eventually finds a portal into the Starless Sea.) In the Afterwards, Dorian takes Fate's heart and puts it in Zach's chest to revive him. Mirabel and the Keeper are together. It's the end of that story, but a new one has begun. See thesection-by-section summary & explanation for The Starless Sea 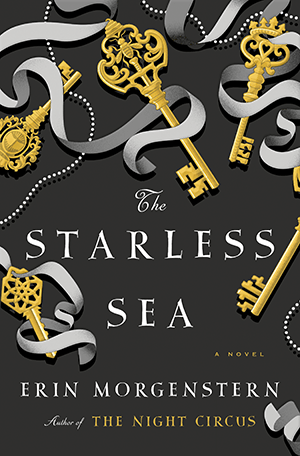 From the Publisher
Zachary Ezra Rawlins is a graduate student in Vermont when he discovers a mysterious book hidden in the stacks. As he turns the pages, entranced by tales of lovelorn prisoners, key collectors, and nameless acolytes, he reads something strange: a story from his own childhood. Bewildered by this inexplicable book and desperate to make sense of how his own life came to be recorded, Zachary uncovers a series of clues--a bee, a key, and a sword--that lead him to a masquerade party in New York, to a secret club, and through a doorway to an ancient library, hidden far below the surface of the earth. What Zachary finds in this curious place is more than just a buried home for books and their guardians--it is a place of lost cities and seas, lovers who pass notes under doors and across time, and of stories whispered by the dead. Zachary learns of those who have sacrificed much to protect this realm, relinquishing their sight and their tongues to preserve this archive, and also those who are intent on its destruction. Together with Mirabel, a fierce, pink-haired protector of the place, and Dorian, a handsome, barefoot man with shifting alliances, Zachary travels the twisting tunnels, darkened stairwells, crowded ballrooms, and sweetly-soaked shores of this magical world, discovering his purpose--in both the mysterious book and in his own life
Read an Excerpt
See it on Amazon Book Depository