Main / Books / The Song of Achilles

Book review and synopsis for The Song of Achilles by Madeline Miller, a love story set in the backdrop of the Trojan War.

In The Song of Achilles by Madeline Miller, Achilles and Patroclus are two sons of kings who are brought together as boys. One of them, Patroclus, is an exile who is disowned by his father. The other is destined to become the greatest warrior of his time and possibly of all time.

In this entrancing retelling of Homer's Iliad, Miller sweeps us into a love story set in the backdrop of the the Trojan War.

The one-paragraph version: Patroclus is an exile who meets Achilles when they are boys. Achilles is half-god (the son of a King and the sea-nymph Thetis, a lesser god) and fated to be a great warrior, ambitions encouraged by Thetis. As the boys grow up, they become lovers. In the Trojan War, Achilles sees his opportunity for fame and possibly immortality. However, his pride leads to Patroclus's death. In the afterworld, the two lovers are reunited.

Patroclus is a sickly and unathletic boy who is disdained by his father, King Menoitius. When he is an adolescent, he is instructed to present himself as a suitor to Helen, the beautiful daughter of the King of Sparta. In the process, Patroclus and all the other suitors is asked to make an oath promising to honor and defend her choice. She chooses Menelaus, brother of Agamemnon.

One day, Patroclus defends himself against a bully and accidentally kills the other boy, the son of a noble. As a result, Patroclus is exiled to Phthia where he becomes the companion to Achilles, the son of the King of Phthia. Achilles is also a half-god because his mother is Thetis, a sea nymph. It is prophesized that Achilles will be the greatest warrior of his time, and Thetis hopes for Achilles to be famous and thereby be granted immortality.

One day, Patroclus kisses Achilles, but they are spotted by Thetis. She responds by sending Achilles away to be trained by Master Chiron the centaur, who has trained many Greek heroes. However, Patroclus follows. They spend their teenage years at Mount Pelion and become lovers.

When Achilles is 16, King Agamemnon plans a war against Troy. Helen has been abducted by Prince Paris of Troy. To keep Achilles from going to war, Thetis hides Achilles away in the island of Scyros, disguising him as a girl. She also marries Achilles off to the King Lycomedes's daughter, and the girl soon becomes pregnant with Achilles' child. (Patroclus follows as well.)

Nevertheless, Odysseus is able to track Achilles down, and he tells Achilles that he will die in obscurity and waste his talents unless he fights in this war. Achilles decides to fight, and Patroclus agrees to go with him. In Troy, Achilles is easily the best warrior.

At one point, Patroclus asks Achilles to claim a captured girl, Briseis, as a war prize for her own protection. After a negotiation for the Trojans to give up Helen failures, the real fighting begins, which soon drags into a prolonged war. Achilles avoids killing Hector, eldest son of King Priam of Troy because there is a prophesy that Achilles will die at Troy, but not before Hector dies.

Nine years into the Trojan War, there is an incident where King Agamemnon claims the daughter of a High Priest and refuses to return her. It angers Apollo, who sends a plague. When Agamemnon is instructed to return the girl to stop the plague, Agamemnon demands Briseis from Achilles as a replacement. It is a grave show of disrespect towards Achilles, and Achilles intends to use it as grounds to kill or dethrone Agamemnon and secure his own legacy.

However, Patroclus has grown close to Briseis and warns Agamemnon to prevent him from violating Briseis. Instead, Agamemnon keeps Briseis in his custody, but otherwise treats her respectfully. Achilles is still determined to stop fighting for Agamemnon, and he plots with his mother to have Zeus force the Greeks to lose badly in the interim in order to force Agamemnon to beg for his return.

When the Greeks are losing badly, others try to negotiate with Achilles, but he demands an apology to soothe his wounded pride. The Trojans soon attack the camp. Listening to people denounce Achilles for refusing to help them, Patroclus comes up with a plan (with Achilles' permission) to dress up as him and lead the Phthian forces on the field. That way, Achilles can be seen as helping in the effort while still being able to make a point to Agamemnon that he has defied him. However, in carrying out this plan, Patroclus is killed by Hector.

To avenge Patroclus, Achilles finally rejoins the fight and kills Hector. As the fighting continues, Achilles is also killed, as had been prophesized, by an arrow loosed by Paris. Achilles and Patroclus's aches are mixed together for burial. Achilles' 12-year-old son, Pyrrhus, arrives and demands that Achilles' tomb be for him alone, which means Patroclus's remains would not be properly laid to rest, leaving him unable to enter the underworld.

Patroclus's soul instead reaches out to Thetis (who had always hated him and deemed him unworthy) who shares his memories of Achilles with her. She finally gives him a burial marker, and Patroclus and Achilles are reunited in the underworld.

It seems like everyone has been reading The Song of Achilles by Madeline Miller lately, and I’ve been trying to make time for it ever since I read and absolutely loved Circe.

The Song of Achilles is an engaging story about the Trojan War, a retelling of sorts of The Iliad. I didn’t love it the same way I loved Circe, but it was well worth a read nonetheless since it’s a solid, well-written book.

In The Song of Achilles, Miller eschews dealing with the legend of Achilles and his infamous heel (explaining later that she didn’t find it compelling or realistic). Instead, she draws from Homer’s Iliad in her depiction of this classic hero of the Trojan War.

The Song of Achilles is essentially a love story about two childhood friends, one of whom is prophesized to become the greatest warrior of his generation. Historically, Achilles and Patroclus have been described as lovers by many classic Greek writers (though not Homer), and Miller takes this idea and runs with it in The Song of Achilles.

The love story between the two is sweet and affecting, serving as the emotional and narrative core of the book. I didn’t find this story to be as layered or powerful as the one in Circe, but it’s given a satisfying narrative arc that I enjoyed nonetheless. Miller offers an incisive and apt transformation of Achilles the mythological legend into a character with a clear personality and human failings.

In Miller’s retelling, Achilles is an unquestionably powerful warrior, good-natured and trusting, but also naïve and driven by his and his parents’ desire for fame, with a touch of egocentrism mixed into his personality as well. Meanwhile, our narrator Patroclus is softer-hearted, observant and caring.

It makes for a riveting recounting of the Trojan War, a story that comes alive especially as the book hits its stride when the characters are embroiled in the war.

Even though I didn’t fall in love with this book the same way I did with Circe, I would still heartily recommend it to people who love mythological retellings, to Madeline Miller fans and to lovers of the classics.

P.S. Also see The Bibliofile’s review of Circe by Madeline Miller, one of my favorite books of all time.

See The Song of Achilles on Amazon.

Read the first pages of The Song of Achilles 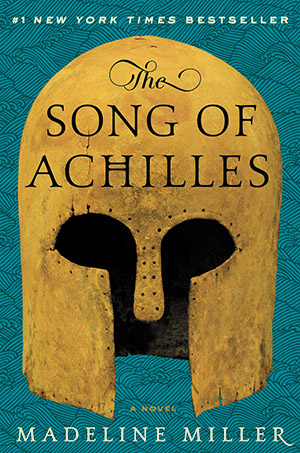 A tale of gods, kings, immortal fame, and the human heart, The Song of Achilles is a dazzling literary feat that brilliantly reimagines Homer’s enduring masterwork, The Iliad. An action-packed adventure, an epic love story, a marvelously conceived and executed page-turner, Miller’s monumental debut novel has already earned resounding acclaim from some of contemporary fiction’s brightest lights—and fans of Mary Renault, Bernard Cornwell, Steven Pressfield, and Colleen McCullough’s Masters of Rome series will delight in this unforgettable journey back to ancient Greece in the Age of Heroes.