Book review and synopsis for Circe by Madeline Miller, an elegant and delightful retelling of Greek mythological tales.

Circe is the daughter of Helios, God of the Sun, and Perse, an Oceanid nymph. Despite her divinity, she is less beautiful and lacks the skills of her siblings, so she is largely shunned and ridiculed among the godly.

When she falls in love with a mortal who, of course, is fated to age and die, she is desperate enough to experiment with a different and illicit type of power -- potions and witchcraft, and with it she discovers her own ability to bend the world to her will.

Circe is born a God, the daughter of a Titan and a water nymph. However, she lacks the powers of her siblings and is less beautiful. They treat her unkindly, except for Aeëtes, but he is granted a kingdom and leaves.

Circe falls in love with Glaucos, a mortal fisherman. In hopes of making Glaucos immortal, Circe learns about illicit Pharmaka, herbs endowed with power that only grow where Gods have fallen. She transforms Glaucos into a Sea-God, but he soon becomes enamored with the beautiful but malicious Scylla. Circe turns Scylla into a sea monster.

Circe is exiled to the empty island of Aiaia for her use of witchcraft, and there she hones her knowledge of herbs and magic. One day, Daedalus, a famed mortal craftsman, arrives at Aiaia, requesting help for Pasiphaë, Circe's sister. In Knossos, Pasiphaë gives birth to a Minotaur. Circe uses magic to manage its hunger, and Daedalus builds it a labyrinthine cage. Daedalus is forced to help because they have his son, Icarus. Daedalus later tries to build wings to help his son escape Knossos, but Icarus flies too close to the sun and dies. Daedalus later dies from old age.

Next, Medea (Aeëtes's daughter) and Jason, arrive at Aiaia, asking to be cleansed. Medea has murdered her own brother and used magic to help Jason acquire a golden fleece. Circe warns Medea that Jason's feeling for Medea will wane now that she is no longer useful to him, and Medea angrily departs.

Later, Alke, the daughter of a lesser river lord, is sent to serve Circe, now known as the Witch of Aiaia, as a punishment. Soon, others adopt the idea and send their troublesome daughters there, too. One day, sailors show up. Circe offers them food, but the captain attacks her so turns them into pigs. Other sailors go to Aiaia when they hear of the island of Nymphs. At first Circe attempts to suss out if they are honest men, but Circe eventually assumes they are all dishonest and turns them all into pigs.

One day, Odysseus and his men arrive. He has an herb that prevents Circe from harming him. She finds him charming, sleeps with him and promises not to harm him. For a year, he stays as he mends his ship. Circe knows he is married, but she yearns for him to stay. Before he leaves, Circe sends him to a prophet and warns about the obstacles in his trip home (Scylla, etc.).

But Circe is pregnant and her mortal son, Telegonus, is soon born. Athena wants the child dead and offers her eternal blessings in exchange, but Circe refuses. Instead, Circe uses powerful magic to protect the island. Telegonus grows up, but longs to visit his father. Circe finally relents and helps him gather protections for the journey. She agrees to suffer eternal pain to acquire a deadly weapon, the tail of Trygon, a sea god. But Trygon ultimately doesn't extract the price and simply tells her to return it when she's done.

Telegonus leaves for Ithaca, but returns quickly because Odysseus is dead. Odysseus misunderstood his intentions and fought him instead, scratching himself on the Trygon's tail. Circe realizes that Athena wanted Telegonus dead to prevent this. Telegonus has also brought Telemachus (Odysseus’s other son) and Penelope (Odysseus’s wife) to the island. Penelope is worried Athena will claim Telemachus in Odysseus's absence and hopes for Circe's protection. Circe uses her magic to protect them, but Athena makes her demands. She wants Telemachus to leave and start an empire, but he has no desire for glory and power. However, Telegonus longs for adventure, and he accepts instead.

With Telegonus gone, Circe calls for her father, demanding that he talk to Zeus and release her from exile. She threatens to tell Zeus the Titans' secrets and start a war. Free to leave, Circe and Telemachus go to turn Scylla into stone, and Circe confides in Telemachus all her secrets. (Telemachus fills her in on what ended up happening with Medea — Jason married another. Medea kills the new wife and murders her children. A golden chariot whisks her home.) Penelope becomes an expert on herbs and becomes the Witch of Aiaia instead.

The book ends with Circe making a potion to bring forth her true self. She then has a vision of herself as a mortal, growing old with Telemachus. She drinks the potion.

Circe, by Madeline Miller, came out early last year, and I’ve been keen to find time for it, so it seemed like a good book to kick off the spring season.

It’s a re-telling the story of Circe, a character originated circa 8th century B.C. by Homer. In Homer’s in The Odyssey, Odysseus encounters her on the island of Aeaea where she is villainously doling out dangerous potions and turning men into pigs.

While in her original incarnation she’s mostly an obstacle to be overcome, in Miller’s reinvented tale, she’s given a new life, as well as a meaningful and imaginative story deeply rooted in a myriad of mythological tales. 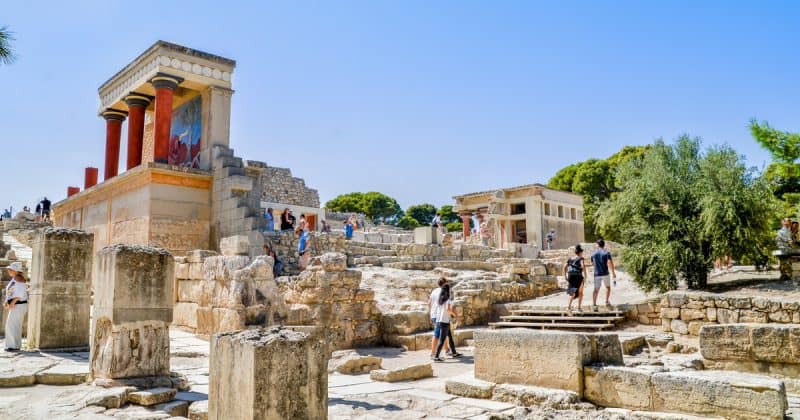 The Palace at Knossos in Crete

A while back, I took a trip to Greece and visited one of the locations that appears briefly in the book, the remains of Minos’s Palace at Knossos in Crete. It was about a hour out from where we were staying, so we had to rent a car, and it was a whole mess, but I desperately wanted to see it.

I’ve come across other references to this site then, but Circe was the first book that ever made me reminisce about it. Reading Circe, I could imagine that crumbling Minoan archaeological site, thousands upon thousands of years old, as a living, breathing palace, gleaming with splendor and marveling that I’d once walked those walkways as well.

Miller’s mythological retelling is so dazzlingly alive. She uses Circe’s story to bring in a whole host of other mythologies, ranging from the Titanomachy (“battle of the Titans”) to the Gift of Fire, various other parts of the Odyssey and so on. The events of these stories all overlap, one washing over the next, intertwining in a delightful and inventive manner. Under Miller’s imaginative gaze, these classic stories are endowed with a newfound energy. Fleshed-out and lively, it’s a pleasure to read, especially if you’re someone who loves mythological tales.

The most difficult part of reading Circe for me was that it took forever because whenever a mention of any character came up, I was always tempted to look them up on Wikipedia to see what parts of their story originate from where. This inevitably led me down deep, and I mean deep, rabbit holes of endless Wikipedia entries and other sources filled with mythological esoterica. (But honestly, I’d consider that a feature, not a bug, when it comes to reading). 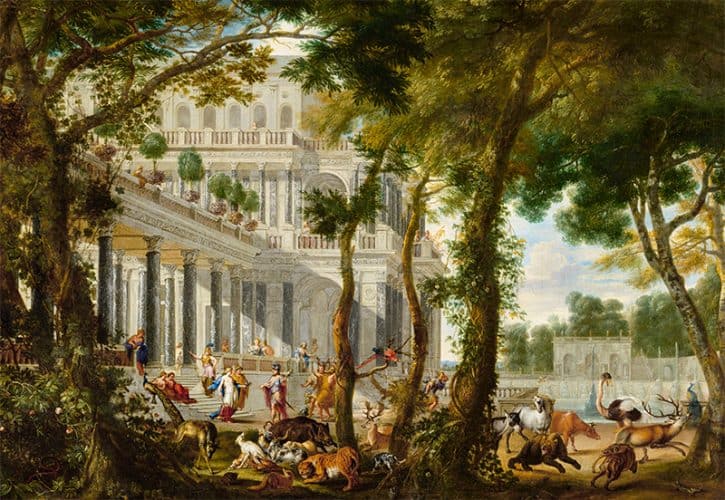 By the second half of the book, Circe has been alive for over a thousand years. She becomes more reflective about her experiences during various interludes, and certainly when Circe’s story takes a darker turn. At those junctions, Miller is thoughtful and introspective. In the book’s more somber moments, Miller explores Circe’s loneliness, alienation, and how her perceptions may have been warped by her experiences or misunderstandings.

Through the relationship of the gods, Titans, Olympians, lesser gods, mortals and so forth, the book contemplates the meaning of having power, how power is derived and how power effects how people relate to each other. Furthermore, using a range of classic Greek Myths to tell a story provides the perfect foundation and a wide berth to delve into fundamental questions about morals and goodness and pragmatism and ambition and balancing it all with the need to survive and protect yourself.

I loved what a complete character Circe is. She is complex, imperfect and is consistently drawn in a way that grounds her in reality, despite her divine origins.

I loved this book. I loved this book so much, it actually surprises me how strongly I feel about it. If you like mythology, Circe is a must read, no caveats. It is such a vivid and wonderful story that brings together so many bits and pieces of Greek mythology and somehow turns them into a cohesive book that is well worth your time. It is all at once thoughtful and entertaining and elegantly written. I was delighted by it.

If you aren’t as into mythology, I still think the story is very worthwhile, though you may have to exercise a bit more patience as you get grounded in all the characters and their stories. I’d really encourage you to give it a shot though if you’re looking for an entertaining, yet meaningful and complex story.

Circe won me over about 20 pages in, and it only got better from there. It’s honestly been quite a few years since I’ve found a book I loved as much as this one, so my feeling can be summed up as follows: 1) I’m sad it’s over, 2) I can’t believe I waited so long to read this, and 3) I need to go buy a copy of Madeline Miller’s previous novel, The Song of Achilles.

Have you read this and what did you think? See Circe on Amazon.

Read the first pages of Circe

See Everything We Know About the 'Circe' Adaptation 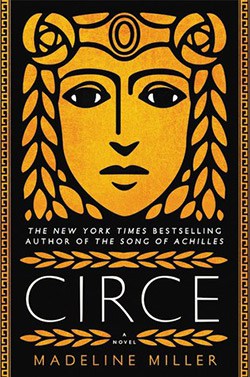 From the Publisher
In the house of Helios, god of the sun and mightiest of the Titans, a daughter is born. But Circe is a strange child—not powerful, like her father, nor viciously alluring like her mother. Turning to the world of mortals for companionship, she discovers that she does possess power—the power of witchcraft, which can transform rivals into monsters and menace the gods themselves. Threatened, Zeus banishes her to a deserted island, where she hones her occult craft, tames wild beasts and crosses paths with many of the most famous figures in all of mythology, including the Minotaur, Daedalus and his doomed son Icarus, the murderous Medea, and, of course, wily Odysseus. But there is danger, too, for a woman who stands alone, and Circe unwittingly draws the wrath of both men and gods, ultimately finding herself pitted against one of the most terrifying and vengeful of the Olympians. To protect what she loves most, Circe must summon all her strength and choose, once and for all, whether she belongs with the gods she is born from, or the mortals she has come to love.
Show More
Read an Excerpt
See it on Amazon
Share This
social & email
New Reviews
recent releases
New Posts
recently posted
Discussion and Replies