Synopsis | Detailed Plot Summary | Book Review | Buy It
Disclosure: This book was provided by the publisher for review.

Book review and synopsis for The Lost Apothecary by Sarah Penner, a novel about female relationships and an investigation into a "killer apothecary" living in late 18th-century London..

In The Lost Apothecary, Nella is the proprietor of a secret apothecary shop in London where she has been vending poisons, known only by word-of-mouth by the women of the city. One day, Eliza, a young girl with a curiosity about her trade, enters the store.

In present day, Caroline has just discovered her husband's infidelity and comes upon a clue about the past existence of the apothecary shop while on holiday in London. Soon, she finds herself absorbed in a historical investigation.

In this vivid novel, the past and the present collide, resulting in a story about female relationships, full of bitter betrayals and intrigue.

The one paragraph version of this: In 1971 in London, Nella runs a secret apothecary shop, illegally dispensing poisons for women to kill men who have wronged them. When the authorities track her down, a young girl who had been helping her, Eliza, sacrifices herself to save Nella. But a (possibly magic) tincture Eliza made ends up saving them both, and Nella realizes that dispensing these poisons is not the way to cure the pain of betrayal. In present day, Caroline is a woman who has been betrayed by her husband. She finds a clue (a vial) about the apothecary shop, tracks down its history, discovers Eliza's involvement, and ultimately decides to toss the vial back into the water to keep Eliza's secret.

In The Lost Apothecary, Nella runs a secret apothecary shop hidden behind a fake back wall in London where she sells poisons to women, spread by word of mouth, to be used against the men in their lives who have wronged them. She keeps a logbook of each transaction. Nella began dispensing poisons when she was betrayed by a lover, Frederick. He had not only turned out to be married, but when Nella had told him she was pregnant, he'd secretly given Nella an herb to cause a miscarriage.

In present day, Caroline is a woman who has just discovered that her husband of ten years, James, was cheating on her. She's in London for the vacation they were supposed to have gone on together. She goes on a mudlarking (looking for old objects in the mud) tour of the Thames and discovers a light blue vial etched with a bear (the insignia of Nella's apothecary shop). Curious about the vial, she begins to investigate its origins. She's assisted by Gaynor, a woman who works at the British Museum.

Back in 1791, a 12-year-old servant girl, Eliza Fanning visits Nella's shop. Eliza was asked by her mistress, Mrs. Amwell, to fetch a poison to kill her husband, Mr. Amwell (it's implied he is a child molester who has set his sights on Eliza). The poison works as intended, and Mr. Amwell is killed. Eliza soon returns to Nella's stop, expressing an interest in Nella's trade. Eliza is also keen to take a break from the Amwell house because she is worried that Mr. Amwell's angry spirit is haunting her because she has started bleeding (but it's actually just that she has begun menstruating).

In present day, Caroline tracks down a reference to a killer apothecary, which leads to a possible location for the shop. She breaks into an abandoned small back alley area and eventually finds what was once Nella's apothecary shop. She takes photos of what she sees, including Nella's old logbook, and she later transcribes these into notes, including Nella's descriptions of her poisons.

Back in 1791, a woman named Lady Clarence enters Nella's shop, wanting to poison her husband's mistress. When Nella refuses to knowingly poison another woman, Lady Clarence threatens to report Nella to the authorities. Nella reluctantly fulfills the order with Eliza's assistance. Meanwhile, Eliza visits a magic shop to try to deal with Mr. Amwell's angry spirit, and she ends up mixing up a magic tincture to reverse "bad fortune".

In present day, Caroline's husband James shows up in London, but ends up accidently ingesting eucalyptus oil (which is meant to be topically applied). The police question Caroline when the medics see her notes on poisons on her desk. However, Gaynor and James help Caroline to clear her name. Caroline figures out that James ingested it on purpose to try to win her back, tells him they need to separate, and he leaves.

In 1791, Lady Clarence reports that things have gone wrong, Lord Clarence is dead and that the authorities may be searching for Nella's shop. Just as Eliza finishes her tincture, Eliza and Nella are forced to flee. As the constables descend on the shop, Nella struggles to run because the poisons she has been brewing are destroying her from the inside. Nella heads toward the bridge to jump off, but Eliza drinks her tincture and then jumps instead, sacrificing herself. The constables assume the unknown killer apothecary is dead and drops their search. Nella also realizes that dispensing poisons is not going to help heal the pain of Frederick's betrayal.

In present day, Caroline goes back to her research and finds out that Eliza survived because the tincture had a warming effect that protected Eliza from the cold waters of the Thames. Eliza married the shopkeeper at the magic shop, Tom Pepper, and had two kids. Nella and Eliza stayed friends.

Caroline decides to apply to graduate school in Cambridge. Even though the revealing the truth of what happened with these apothecary murders so many years ago would be a great academic find, the book ends with Caroline tossing the vial she found back into the water so she can protect Eliza's secret about what really happened.

The Lost Apothecary by Sarah Penner drew me in with its gorgeous cover and tantalizing premise. I normally do quite a bit of research on books — reading reviews, trying to get a sense of the plot, etc. — before mentally committing to reading something. But with The Lost Apothecary, I decided to take a gamble; I was intrigued by it and wanted to just dive in.

There’s something uniquely delightful about even just the word “apothecary”. It rolls off the tongue with its satisfyingly crisp consonants and the word invokes images of days long gone, some sense of mystery, and a mixture of ingenuity, science and finesse.

As such, the premise of a secret apothecary shop and a woman mixing poisons for other women was too temping to pass up. Plus, the dual timelines and an investigation into centuries-old murders just the cherry on top that brought this book bubbling up to the top of my reading list.

The story itself is well-paced and the writing is solid. It’s an easy and accessible read, and the up-tempo story jumps back and forth from past to present as the story develops. In the 1700s timeline, Nella’s secret shop risks being revealed to the authorities, while in the present day Caroline is researching its existence.

I also got the sense that Penner did a fair amount of research for this novel, especially when it comes to the remedies and whatnot used by the apothecary, and she tosses in a few interesting historical facts. I had no idea “mudlarking” was a thing before I read this book! She does a good job of creating a sense of time and place for the parts of the book that are set in the past.

The Lost Apothecary has a lot of strengths, but it still felt to me like a debut novel. The characters felt a little underdeveloped, and I wish they had a bit more personality. There were a few minor plot justifications that didn’t make a ton of sense to me.

For example, Nella’s refusal to destroy her logbook was odd. The reason given is that she wants to preserve the memory of the women in it, but it seems to me that preserving a record of them in this way does their memory a disservice since it’s likely linked to one of the worst moments in their lives. I also didn’t really understand what prompted Nella’s emotional growth, and Eliza’s indifference to murder is left unexplained.

In terms of the build-up of suspense, the cadence of the novel felt just a bit off to me as well. At various points, there’s elements of suspense, but many of the plot points get sorted out a little too easily, so there’s not really that sense of a building up of suspense and the satisfying resolution that comes with it.

Ultimately, there just wasn’t as much of a sense of mystery or excitement that I’d been hoping for when I’d read the premise. However, there is still a nice story in there about female relationships, revenge, betrayal and just a touch of magic.

The Lost Apothecary doesn’t quite live up to the promise of its intriguing premise and captivating cover art, but it’s also an effortless read with some interesting components, and I think it was worth the few hours I spent reading it.

The writing is fine and the narrative is cohesive enough that it feels complete. I felt like the characters could have been developed more and there wasn’t quite the level of tension and mystery that the cover blurb seems to suggest, but I still enjoyed the story and for a debut novel it’s solid. I’d say this is more of a gentler novel than the thriller-esque tone of the book description indicates.

Overall, I’m glad I gave it a chance. It’s a quick read with a clear sense of the message it wants to impart. I’d say if you’re on the fence about it, but you’re really curious about the premise like I was, you might as well give it a shot.

While I thought the book had some shortcomings, I enjoyed The Lost Apothecary enough that I’m very curious about what she comes up with in the future. If you liked Once Upon A River, you may like this book as well.

See The Lost Apothecary on Amazon.

The audio recordings seem to be sub-par quality (there’s a lot of audio artifacts), and the voice of Nella has a fairly strong cockney accent that I wasn’t a huge fan of listening to for long stretches. I wouldn’t have minded it for just the dialogue parts, but just found it irritating.

I would have preferred to listen to this book via audiobook, but ended up reverting back to reading it the old-fashioned way just cause I really didn’t enjoy the audiobook.

Hear a sample of The Lost Apothecary audiobook on Libro.fm.

See Everything We Know About the 'The Lost Apothecary' Adaptation 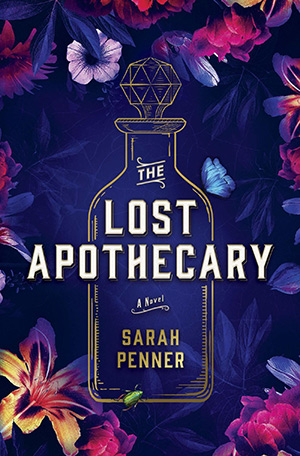