Book review and synopsis for Survive the Night by Riley Sager, a cat-and-mouse thriller set in on a car ride in 1991.

Survive the Night opens in November 1991. Needing a ride back home to Ohio from her college in New Jersey, movie-obsessed student Charlie Jordan ends up in a car with a man who might be a serial killer.

Josh Baxter, the man behind the wheel, is stranger, having met Charlie thanks to the campus ride board. Meanwhile, Charlie is still reeling from the guilt and grief over the murder of her best friend, who became the third victim of the man known as the Campus Killer.

As they travel down the highway in the dead of night, Charlie starts to suspect Josh may be the killer. In this cat-and-mouse thriller, it remains to be seen whether Charlie will manage to survive the night.

Section-by-Section SummarySee the Section-by-Section Summary of Survive the NightQuick Plot Summary
The one-paragraph version: Charlie is a female college student whose best friend, Maddy, was recently murdered by a campus serial killer. She hitches a ride home with a guy, Josh, who she starts to suspect is the killer. In the end, it turns out he was asked to abduct Charlie on behalf of Maddy's grandmother who blamed Charlie for not stopping and not being able to identify Maddy's killer. Josh ends up saving Charlie, and the killer is revealed to be Charlie's boyfriend Robbie. Charlie and Josh eventually get married. A movie is made of the ordeal and it's revealed that this book has been the Hollywood-ized version of the story.

Charlie is a female college student whose best friend, Maddy, was recently murdered by a campus serial killer ("The Campus Killer") while she watched. Charlie has a tendency to have hallucinations where she sees movie-like scenes play out in her mind, especially in heightened emotional situations, and she didn't think it was real.

Upset and guilty for not stopping him, Charlie drops out of college. She ends up getting a ride home from a man, Josh, who she starts to suspect is the killer as they drive back. After some mind games and confusion, they end up at a diner and Charlie has a chance to get away from him, thanks to the waitress Marge. Josh thinks about how the situation is regretful since he likes talking to Charlie. Charlie also manages to call her boyfriend, Robbie. However, Charlie decides to stay with Josh, deciding that she's going to make him pay for his crimes.

It results in Charlie stabbing Josh and returning to the diner. There, she is abducted by Marge, who turns out to be Maddy's grandmother. Josh isn't the killer, he's a bounty hunter hired by Marge to lure Charlie to the diner. Marge demands answers about Maddy's death from Charlie, and she attacks her when Charlie can't answer. Josh shows up and saves Charlie, but gets shot by Marge, who also starts a fire. Charlie escapes the fire while having a mix of hallucinations, one of which involves saying goodbye to Maddy. Before Marge can shoot Charlie, Robbie shows up and stops her.

They're about to drive off, but Charlie finds a box of teeth (which the serial killer took from his victims), and Charlie realizes Robbie is the Campus Killer. After a struggle, Robbie is drowned in the river and Charlie ends up at a hospital. Marge is there, alive. Charlie ended up not telling the police about her. Instead, she gives Marge a tooth she extracted from Robbie to show they now have justice for Maddy's death, which is what Marge wanted all along.

A final epilogue reveals that the story represents a movie-ized version of the actual events. Charlie is in a movie theater watching screening of it. In reality, the scenery was less attractive and there was no fire. Crucially, the scene final with Marge (reconciliation + the tooth) never happened. Instead, Marge shot herself after Charlie left her at the lodge. It's now years later, and Charlie is happily married to Josh who now works as a chauffer.

Survive the Night is the newest release from author Riley Sager, this time set in the backdrop of a car ride one night in 1991.

If you’ve read books by Sager before, I’d start by providing a quick warning that this book is a thriller much moreso than a mystery. There’s a mystery element, but this is definitely thriller territory, albeit with a whole host of plot twists.

I liked Lock Every Door and Home Before Dark quite a bit, but this book feels a little different given its thriller-esque premise.

The setup of the story is based off a standard horror-slash-thriller movie trope — a woman riding in a car with a man who may or may not be a serial killer. In Survive the Night, Charlie is a female college student, who accepts a car ride from a stranger, Josh. The prologue of the book lets you know that the majority of the story takes place in the context of this car ride.

There’s a certain elegance to a simple premise — two people in a car — but it also means that things like dialogue, dramatic tension and the personalities of those two characters need to pull extra weight in keeping the story engaging.

Unfortunately, Charlie makes for a kind of an uneven protagonist. She likes old movies and that’s basically her entire personality. While it plays an important part in the book (and it plays into her character arc), it also makes her kind of an annoying protagonist and she feels a little flat as a character for most of the book. There’s plenty of good thrillers with not-quite-fully-formed characters, but given the pared-down premise, the lack of a compelling main character feels glaringly obvious.

Another issue for me was that a major part of the plot is that Charlie gets strange hallucinations where she zones out and sees movie-like scenes play in her mind (not a spoiler, this is discussed in the first few chapters), usually as a response to an emotionally heightened situations. It’s explained as a kind of escapism-type response mixed in with her love of movies. But if this sounds like a cheap tactic to create problems for her in the book, that’s exactly what it felt like when reading it. So much of the plot hinges on these mind movies that the story feels a little too nonsensical.

To the book’s credit, towards the end especially, there are a ton of fun plot twists and plenty of surprises lurking in pages. If you like twisty stories, this one fits the bill, though the first half may feel less interesting to you.

I should add that I thought the final epilogue was clever. I also liked the way Riley Sager brings various elements of the book neatly together at the end (all his books are great about this!), and the character of Charlie is given a bit more depth as her story arc concludes. I was genuinely pleasantly surprised by a few of the plot turns, too — but ultimately it wasn’t enough to make up for the shortcomings of the book for me.

This book is, unfortunately, a skip it for me. I feel bad saying this because I like Riley Sager, and I really appreciate how carefully he plots his stories.

However, the main character seems like such a dud through most of the book — in a story setup that really demands a compelling protagonist to carry you through it. And the whole plot device of her getting weird hallucinations leads to a lot of nonsensical ways for things to play out, especially in the first half of the book.

If you really enjoy lots of plot twists, you might consider reading this, though I’d warn you that the book doesn’t really get good until the last quarter.

Survive the Night is a quick and very easy read, but I still struggled to stay interested in it at times. Fans of Riley Sager, perhaps you might like it, but be forewarned that this book definitely feels uneven, with some high points and some very questionable low points.

See Survive the Night on Amazon.

Hear a sample of the Survive the Night audiobook on Libro.fm.

Read the first pages of Survive the Night 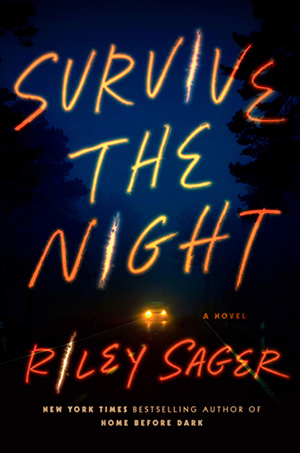 Survive the Night opens in November 1991. George H. W. Bush is in the White House, Nirvana's in the tape deck, and movie-obsessed college student Charlie Jordan is in a car with a man who might be a serial killer.

Josh Baxter, the man behind the wheel, is a virtual stranger to Charlie. They met at the campus ride board, each looking to share the long drive home to Ohio. Both have good reasons for wanting to get away. For Charlie, it’s guilt and grief over the murder of her best friend, who became the third victim of the man known as the Campus Killer. For Josh, it’s to help care for his sick father. Or so he says. Like the Hitchcock heroine she’s named after, Charlie has her doubts. There’s something suspicious about Josh, from the holes in his story about his father to how he doesn’t seem to want Charlie to see inside the car’s trunk.

As they travel an empty highway in the dead of night, an increasingly worried Charlie begins to think she’s sharing a car with the Campus Killer. Is Josh truly dangerous? Or is Charlie’s suspicion merely a figment of her movie-fueled imagination?

What follows is a game of cat and mouse played out on night-shrouded roads and in neon-lit parking lots, during an age when the only call for help can be made on a pay phone and in a place where there's nowhere to run. In order to win, Charlie must do one thing—survive the night.