In the Ninth House, Alex Stern is a student at Yale who is part of an organization the Lethe, also known as the Ninth House, that oversees the secret societies on campus that deal in arcane magic. Alex was selected due to her unique ability to see ghosts, known as Grays.

As the novel opens, Alex's mentor, an upperclassman named Darlington, has gone missing. Meanwhile, a murder of a local girl, Tara, occurs on campus that Alex suspect is related to society activities. As Alex navigates this world of magic and mystery, she must uncover the truth about what happened to Darlington and Tara while other forces work to keep these secrets hidden.

Alex Stern is a student at Yale who is part of an organization called the Lethe, also known as the Ninth House. It oversees the eight ancient secret societies on campus that deal in arcane magic. Alex was selected due to her unique ability to see ghosts, known as Grays. Unbeknownst to Lethe, she's also able to possess the spirit of ghosts and draw from their power. Her mentor at Lethe is a guy named Darlington, who has gone missing recently. When the book opens, there has been a murder of a local girl, Tara.

When Alex looks into Tara's death, Alex suspects that the societies are involved, though Detective Turner first thinks it was Tara's boyfriend, Lance. Dean Sandow, who oversees Lethe, tells Alex to stand down, but Alex investigates anyway. She gets help from Dawes, a Lethe assistant.

She learns that Tara and Lance were weed dealers who were helping society members grow magic substances on the side. They grew a magic drug called Merity, which makes people compliant. They also had been growing and distilling a mushroom for use in portal magic. Allowing outsiders like Tara and Lance to have access to these restricted substances could get societies disbanned.

Over the course of the book, we also learn Alex's back story. She was an outcast since people thought she was crazy. After she was raped by ghost, she dropped out of school and began doing drugs (which dulls her ghost-seeing abilities). She fell in with a bad gang, including Len her abusive, older boyfriend. One night, a friend of hers Hellie was killed while Len was doing a drug deal. That night, Alex realized she could possess Hellie's spirit, and uses it to murder all the rest of them. She was then found in the hospital and recruited into Lethe. They taught her how to manage the ghosts and ward them off and whatnot.

Alex uses a connection with a ghost ("North") to research Tara's death. In exchange, Alex must find the killer of North’s fiancée, Daisy, who North is believed to have murdered in 1854. Darlington had also been looking into her death. When Alex finally locates Darlington’s notes, she realizes that Daisy’s death corresponds with the founding of the tomb of the first secret society. Each founding after that also corresponds with the death of one woman. In other words, it’s these deaths that create the power nexuses that fuel the secret societies, and Tara’s death was meant to create a new one.

When Alex confronts Dean Sandow about her findings, Dean Sandow admits he killed Tara (a secret society paid him to create a new nexus), but also says that it didn’t work. No new nexus appeared. Professor Belbalm then interrupts to admit that she is actually Daisy’s soul residing in another possessed woman’s body. She is a Wheelwalker, like Alex, which is why they both have special powers. Consuming human souls keeps her alive, but also creates these new nexuses. Consuming other Wheelwalkers sustains her longer, but no matter what she can’t leave New Haven without decaying. Belbalm kills Sandow, but as she tries to consume Alex, Alex draws upon all the souls inside Belbalm to use their power to fight Belbalm. Daisy’s soul is extracted and consumed, and Belbalm dies.

We also find out that Darlington disappeared into what he thought was a magic portal, but turned out to be a mouth into hell. Dean Sandow created it to get rid of Darlington because he was looking into the creation of the nexuses. At the end of the book, Alex believes that Darlington wasn’t consumed, but transformed into a demon. She recruits Dawes and Michelle (Darlington's mentor) to go with her into hell to bring him back.

Ninth House, by Leigh Bardugo, was released earlier this month. The book is unconnected to Barugo’s very successful “Grishaverse” world. Instead, it’s the first in a planned series of books about the protagonist, Galaxy “Alex” Stern.

I find secret societies a little hokey and self-important, so a book that gives them even more import and significance was always going to illicit some skepticism from me. However, Bardugo’s novel was imaginative enough to help me move past it all. It’s a thoroughly-conceived world and Bardugo has clearly taken great pains to set it up to encompass a wide range of stories. Each of the eight houses, plus the titular Ninth House that oversees them, has its own abilities and powers which make for diverse narrative possibilities.

While the book is heavily based in fantasy, mixed into the magic of Bargudo’s New Haven are elements that borrow from existing structures of privilege and power. Bardugo’s version of Yale is entrenched in the same power structures and class divisions that permeate across most college campuses, especially private “elite” colleges.

Bardugo explores these themes in various ways. For example, in the book, it is a “funding year” for the Lethe house, a year when their budget is renewed. When a mysterious murder takes place, despite Lethe’s role of oversight, the Dean of the house is reluctant to stir up trouble which creates a consistent obstacle in the book. Meanwhile, Alex Stern is accepted into Lethe based on her special ability to see ghosts (called “Greys”), but her outsider status results in being treated differently by others and having her credibility questioned.

The Ninth House exists in a conceptually fleshed-out world, but because it’s the first book in the series, it carries the burden of setting up the world and its many secret organizations. As a result, there’s a lot of information being flung at you on each page. There’s background information, descriptions of the mechanics of different types of magic, explaining the rules regarding the Lethe and all the secret societies, and so on.

Bardugo has come up with a very clearly imagined world and seems eager to let us all visit it along with her, but it seemed like maybe some of it could have been parceled out into future books. As a result, the book moves a little slow for something billed as a thriller. The plot does pick up quite a bit in the last hundred pages or so though, so if you hit the halfway point, you might as well finish it.

Also, the book contains some graphic content, which I was fine with (though I know many people were upset by this), except that it seemed unnecessary. There’s not a lot of it, but it still made the book a little more smutty than I’d prefer.

In the Ninth House, Bardugo has dreamed up a thoroughly conceived fantasy version of New Haven. It’s a setup that undoubtedly has a lot of room to grow and maneuver.

However, I would probably only recommend this book to people who think they want to follow this series. A lot of this book is focused on setting up the series. As a standalone book, the plot and the mystery are just okay. Instead, a large portion of this book is spent explaining things, hinting at the characters’ backstories and waiting for information to be revealed.

I’d also add that this is an unabashedly dark novel with some graphic language. I found the story and world-building interesting, but I still felt like I needed a break from this world from time to time. Of course, I suspect this is partially a personal preference. I’m not sure if I’d consider continuing the series.

What do you think? Is this something you’d read or if you’ve read it, what did you think?

See the Ninth House on Amazon.

See Everything We Know About the 'Ninth House' Adaptation 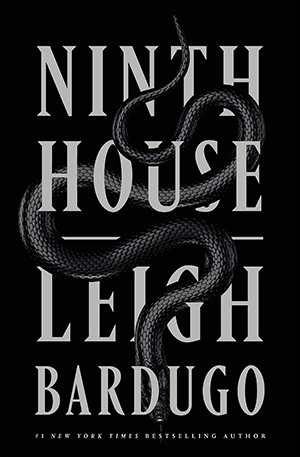 From the Publisher
Galaxy “Alex” Stern is the most unlikely member of Yale’s freshman class. Raised in the Los Angeles hinterlands by a hippie mom, Alex dropped out of school early and into a world of shady drug-dealer boyfriends, dead-end jobs, and much, much worse. In fact, by age twenty, she is the sole survivor of a horrific, unsolved multiple homicide. Some might say she’s thrown her life away. But at her hospital bed, Alex is offered a second chance: to attend one of the world’s most prestigious universities on a full ride. What’s the catch, and why her? Still searching for answers, Alex arrives in New Haven tasked by her mysterious benefactors with monitoring the activities of Yale’s secret societies. Their eight windowless “tombs” are the well-known haunts of the rich and powerful, from high-ranking politicos to Wall Street’s biggest players. But their occult activities are more sinister and more extraordinary than any paranoid imagination might conceive. They tamper with forbidden magic. They raise the dead. And, sometimes, they prey on the living.
Show More
Read an Excerpt
See it on Amazon Book Depository