In Mexican Gothic, Noemí Taboada is a young and wealthy socialite, who receives a concerning letter from her newly-married cousin, Catalina. Catalina has written asking for help. She sees ghosts and believes that her husband, Virgil, is poisoning her. Virgil Doyle comes from a once-wealthy family that has run out of money.

Noemí heads up to High Place, a mountainside mansion where the Doyles reside. Before long, she starts having visions, hallucinations and dreams of a golden woman in the walls. Meanwhile, in town, rumors abound about the cursed Doyle family and their sordid past. In this atmospheric and creepy tale, Noemí finds herself faced with the secrets hidden in this inhospitable place and among this strange family.

Noemí Taboada is a 22-year-old wealthy socialite. She goes to see her cousin Catalina, who is living with her husband's family in the High Place, a mansion located near a small village in the mountains. Catalina has written asking for help. She sees ghosts and believes that her husband, Virgil, is poisoning her. Virgil Doyle comes from a once-wealthy family that has run out of money. Noemí worries that the Doyles are after Catalina's bank account.

At the High Place, Catalina has a fever and is ranting about ghosts in the walls. She is being treated by the family doctor, Dr. Arthur Cummins. Noemí is given limited access to Catalina. Catalina asks Noemí to secretly pick up medicine (a tincture) from the town healer, Marta Duval. But the tincture causes a seizure, and Noemí's visits with Catalina are limited further.

Noemí eventually learns that High Place was built by the Doyle brothers, Leland and Howard (Virgil's father). They also re-opened the town's old silver mines. Howard's first wife was Agnes, who died. Howard remarried Agnes's sister, Alice, and they had two children, Ruth and Virgil. Meanwhile, Leland married Dorothy, and they had Michael and Florence.

Ruth fell in love with a man who mysteriously disappeared. Instead, Ruth was ordered to marry Michael. Before the wedding, she drugs and shoots up the household. Leland, Dorothy, Michael and Alice were killed. Then, Ruth killed herself. The mines were closed around that time. Florence later married and had Francis. But her husband, Richard, went raving mad and was found dead in a ravine. Now, the only Doyles left are Howard, Florence, Francis and Virgil.

As Noemí stays in the house, she starts to dream of ghosts, have strange visions involving the Foyles and she sees a golden woman climbing out from the walls. Noemí forges a friendship with Francis, but he warns her not to trust the rest of them. Virgil is charming but seems predatory. Florence is strict and scolds Noemí constantly. And Howard is old, controlling and a eugenics enthusiast. There are also rumors that the family is cursed. In addition to the family's sordid history, there is a sickness that has at times caused fevers, madness and death in many of the family's workers and staff.

As Noemí's dreams get worse and she starts sleepwalking, and she decides to leave High Place for now. At that point, the Doyles reveal they have no intention of letting her go. They tell her the truth, that Howard discovered a long time ago a mushroom that had the ability to heal and extend life. It is especially potent within the Doyle's bloodline, which is why they have an incestuous family history. This house and the air in it is infused with the mushroom's spores, which has grown around and under it, forming a symbiotic relationship with the house and its inhabitants. It also allows a level of control over people that have inhaled its spores.

The spores have an ability to collect and store memories. Noemí's visions are actually the family's collective memories, which they call "the gloom." Howard sacrificed his first wife, Agnes, through a ritual that turned her into the mind and hub for the spores to spring forth from. Howard is actually around three hundred years old. He has the power to transmute his memories into the gloom and then live on in another's body. He's been doing this with family members to preserve the potency of his powers.

The Doyles have lately been branching out in terms of marriages (Catalina, Richard, etc.) because their inbreeding is causing infertility. Outsiders react differently to the spores, with some getting fevers and dying (the sickness that killed their workers). But Noemí seems to highly complementary, plus she has the wealth they need to replenish their fortunes. They want Noemí to marry Francis.

Francis knows this is wrong, and he tells Noemí that Marta's tincture can lessen the spores' control over people. Francis and Noemí devise a plan for her to go along with the plan temporarily, as he sneaks Noemí and Catalina the tincture. After the wedding ceremony, they want to transmute Howard into Francis. However, Catalina stabs Howard in the eye with a scalpel, and Francis takes Florences gun and shoots her.

They escape into the family crypt, and Noemí sees that the body of Agnes is down there with spores sprouting from her body and her mind still acting as the hub. Virgil stops them. Virgil says he knew about them continuing to take the tincture, but he allowed it because he wanted them to injure Howard. That way, Virgil can take control of the spores. Instead, Francis fights with him, and Noemí lights the body of Agnes on fire. Catalina, Noemí and Francis escape into town with the house ablaze behind them.

The book sends with the police and Noemí's father headed over to the town to check things out. Francis has a dream about the house healing itself and him inside it, with it emerging stronger than ever. He wonders if he should kill himself. However, Francis and Noemí kiss, and they are hopeful they can build a better future.

Mexican Gothic by Silvia Moreno-Garcia came out recently, and I’ve been enjoying its creepy delights this past week. I liked it, though it may not be for everyone. It’s a Gothic horror novel set in Mexico in the 1950s.

Mexican Gothic is a true Gothic horror novel, with equal emphasis on both the “Gothic” and “horror” parts of that equation. In terms of the Gothic style, it borrows from other classic Gothic works such as Daphne du Maurier’s My Cousin Rachel and Charlotte Perkins Gilman’s The Yellow Wallpaper, but branches off into a story that is very much distinct from its predecessors.

If you’ve read either of those, you’ll recognize some familiar story beats early on, but rest assured that Mexican Gothic is definitely not a rehash and stands firmly on its own. And the horror aspects get amped up as the story goes along.

Moreno-Garcia has penned an atmospheric and very horrific tale. The beginning starts off not quite slow-moving exactly, but I would describe the “action” to be a little more subtle and meant to build suspense. Instead of wild, dramatic occurrences, it offers bits and pieces of intriguing information at the onset, though the plot ratchets up quite a bit towards the end.

Throughout the novel, Noemí tries desperately to reason through seemingly inexplicable occurrences and the Doyle family’s cursed history. I loved that Moreno-Garcia infuses her book with enough research to make her characters sound informed about the topics they talk about, without slowing the narrative down.

Mexican Gothic draws in many of the classic Gothic hallmarks, lots of foggy views, a creaky house, candlelit hallways and a sexually charged atmosphere. If this sounds like something you’re into, I don’t think you’ll be disappointed with this book, though there is an equal if not greater emphasis on the horror aspects of it as well.

In general, I found the plot pretty solid, though there were aspects that I think could have been a little neater or explained better. I was very surprised by the ending, but in a good way. It’s creative and novel in a way that I think horror fans will love. If you’re a Stephen King fan, for example, I think you’d feel perfectly at home reading this.

Mexican Gothic is precisely what it advertises itself to be, which is a work of Gothic horror. So, whether or not you’ll like it is partially dependent on whether you like a) Gothic literature and b) horror novels.

Both aspects of this book are well done. But while I love the Gothic aspects of it, horror has never been my favorite genre. I still enjoyed the book quite a bit, and I think Silvia Moreno-Garcia is a really good writer, but I think this book is not necessarily going to be for everyone.

If you think these genres might be up your alley, Mexican Gothic probably a great pick for you. It’s atmospheric, well written, and a delightfully horrific ride. Read it if you think Daphne du Maurier meets Stephen King sound like a fun time for you.

See Everything We Know About the 'Mexican Gothic' Adaptation 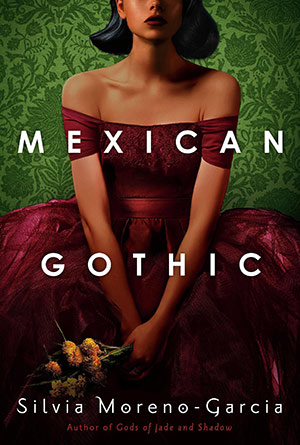 From the Publisher
After receiving a frantic letter from her newly-wed cousin begging for someone to save her from a mysterious doom, Noemí Taboada heads to High Place, a distant house in the Mexican countryside. She’s not sure what she will find—her cousin’s husband, a handsome Englishman, is a stranger, and Noemí knows little about the region. Her only ally in this inhospitable abode is the family’s youngest son. Shy and gentle, he seems to want to help Noemí, but might also be hiding dark knowledge of his family’s past. For there are many secrets behind the walls of High Place. The family’s once colossal wealth and faded mining empire kept them from prying eyes, but as Noemí digs deeper she unearths stories of violence and madness.
Show More
Read an Excerpt
See it on Amazon
Share This
social & email
New Reviews
recent releases
New Posts
recently posted
Discussion and Replies