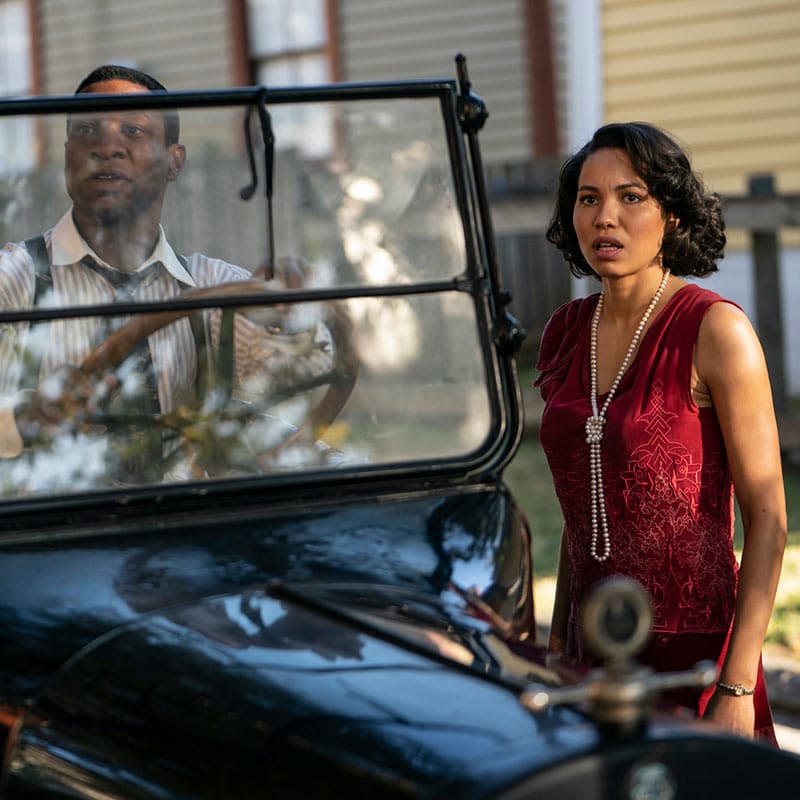 Lovecraft Country, Episode 9 (“Rewind 1921”) opens with Diana in bad shape after being attacked by the strange creatures (in the previous episode) thanks to Captain Lancaster’s nefarious spell.

The adults – Montrose, Lettie, Atticus and Ruby – debate what to do. They determine that asking Christina for help is inevitable, though Montrose is reluctant to get further involved with any magic whatsoever. However, this clearly requires a magical solution, and Christina is the only one who really knows what she’s doing. They don’t want to risk Diana’s life. After Lettie admits that she already gave the Titus’s pages to Christina, they are worried that have nothing to offer Christina in exchange. However, Ruby (who has been carrying on a relationship with Christina/William) is certain that she can convince Christina to do it. 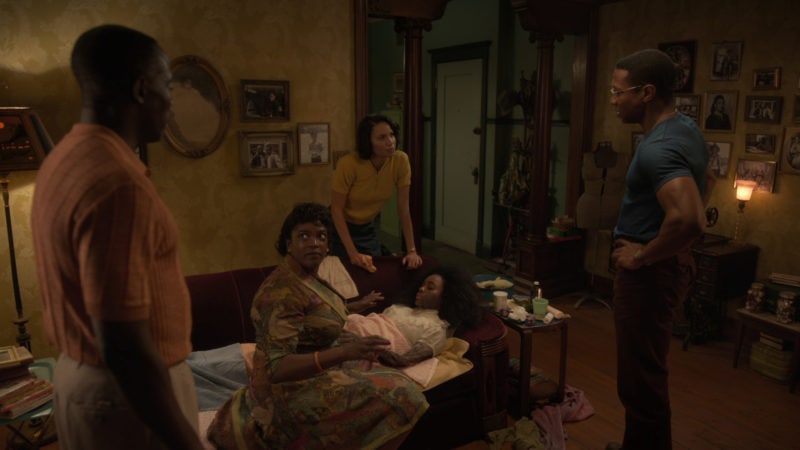 When Christina arrives, she explains that she needs either the Book of Names or for Captain Lancaster to remove the curse himself. Unfortunately, Lancaster is dead, having been part of the attack at Lettie’s house where the monster rose out of the ground to protect Atticus (at the end of Episode 8).

Instead, Christina proposes resetting the curse. It will get rid of the injuries, but the curse will still be there. Still, it’s the best they can do without the Book of Names. In exchange, she wants Atticus to go back to the Ardham with her on the night of the Autumnal equinox. Atticus agrees. To do it, they need the blood of Diana’s closest living relative. Hippolyta is missing (she’s gone off into an alternate world), but Atticus suggests that Montrose can do it since he’s her uncle.

Afterwards, Christina (in William’s body) shows up at Lancaster’s office. He’s actually still alive despite the attack, but barely. His henchmen have been abducting and murdering black men to swap out his damaged body parts to keep him alive, but it’s not working. It’s revealed that the talisman Christina had Ruby place in Lancaster’s office included some type of regeneration magic. However, instead of regenerating him whole, it keeps his wounds regenerating. Finally, Christina watches Lancaster die.

As they are preparing to do the spell, Montrose finally reluctantly admits to Atticus that Atticus might actually be Diana’s closest living relative. It’s possible that George is Atticus’s father, which would mean Atticus is Diana’s half-brother. However, just then, Hippolyta walks back in, which simplifies things.

Using Hippolyta’s blood, Christina performs the spell which undoes Diana’s injuries. Afterwards, Lettie stops Ruby as she is about to leave with Christina. Ruby insists that Christina has only helped them, but Lettie is skeptical of her. She says that Christina has something planned on the Autumnal Equinox and she’s worried that Atticus’s involvement will result in his death.

Later, Ruby confronts Christina about this, and Christina admits that she does need Atticus’s blood — all of it — as part of her spell to become immortal. Instead of arguing with her, Ruby simply asks Christina to promise not to hurt Letitia (her sister), and Christina agrees. 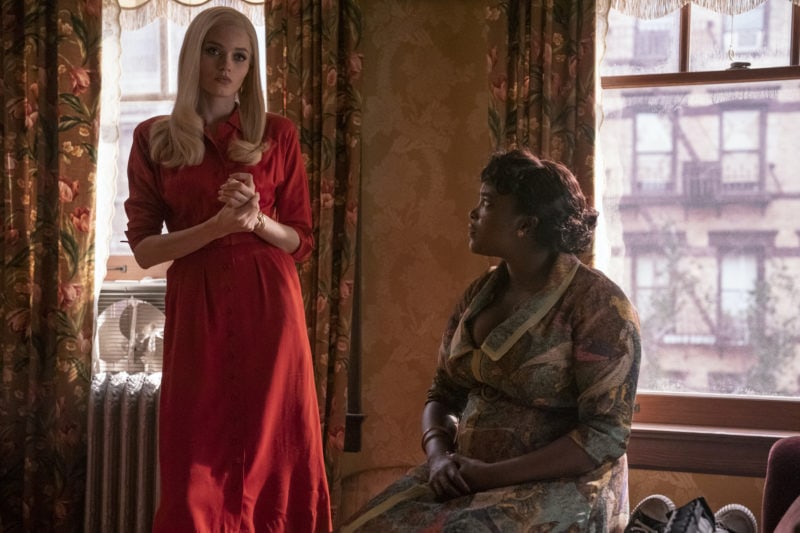 Back at the guide’s office, Hippolyta is certain she can fix the portal and use it to save Diana. They all head over to Hiram’s observatory, where the portal is, and work to fix it. As they do, Montrose tells Lettie that he knows she’s pregnant. He says that Atticus found out by going through the portal. Atticus didn’t tell her about the portal because Atticus also learned that he dies because of Christina’s spell.

With the portal working, Hippolyta sets up the portal to go back to Tulsa in 1921 to try to get the Book of Names (to fully undo Lancaster’s spell on Diana). She warns them not to do anything that will change the future. 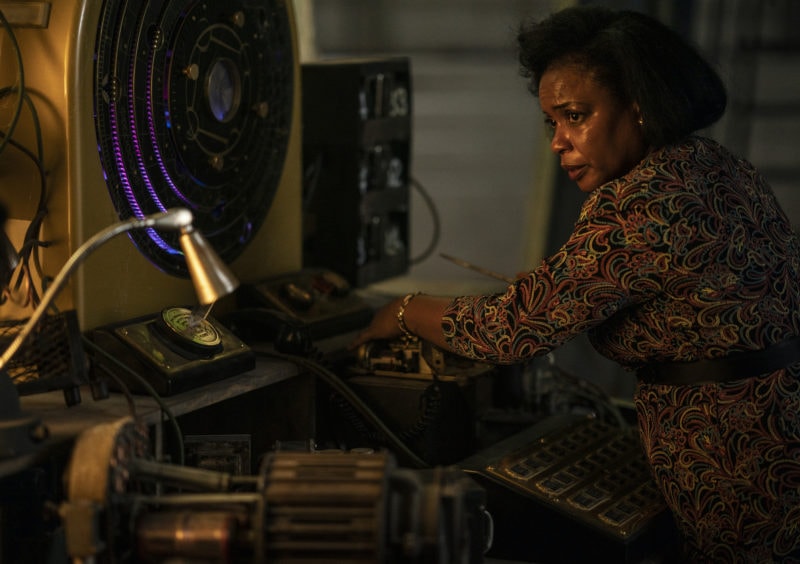 They arrive the first day of the Tulsa Riots (where white people destroyed a black neighborhood). They head to Atticus’s mother’s house, where they think the Book of Names was at that time. Meanwhile, Atticus argues with Montrose about the new revelation about his parentage. Atticus recalls being beaten by Montrose as a boy and how he’d wished that George was his father instead. 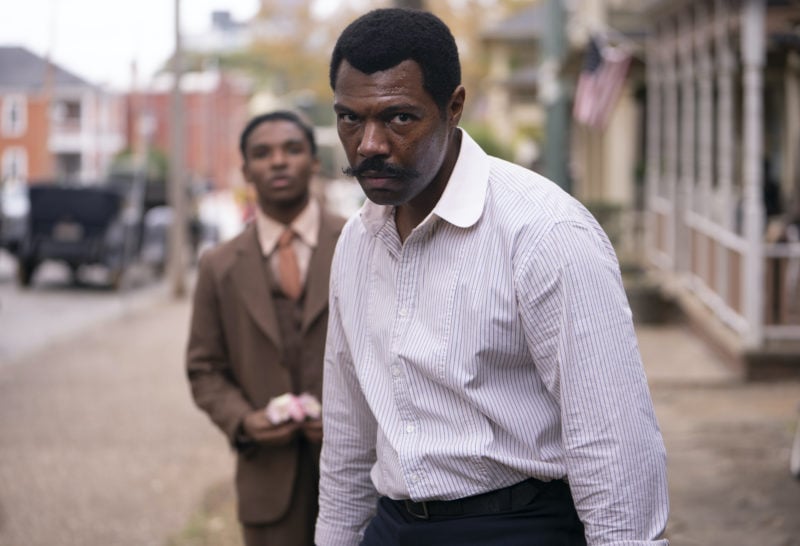 They get there in time to see a young Montrose being beaten by his father. Dora (Atticus’s mother) lives next door and steps in to stop him. When Montrose’s father threatens to whip her too, Dora’s father warns him not hurt her. Afterwards, Dora gets mad at George for not intervening to stop his father’s beating.

Montrose (from 2020) watches the scene play out from afar. He says that Dora was wrong and that George did what he could. Afterwards, Atticus and Lettie notices that Montrose (from 2020) is missing. Atticus thinks that he’s gone off to try to warn George about getting shot at Ardham in the future, despite Hippolyta’s stern warning not to mess with the future. Montrose rushes off to find Montrose. As he does, two gunshots ring out, since the riots are soon beginning. 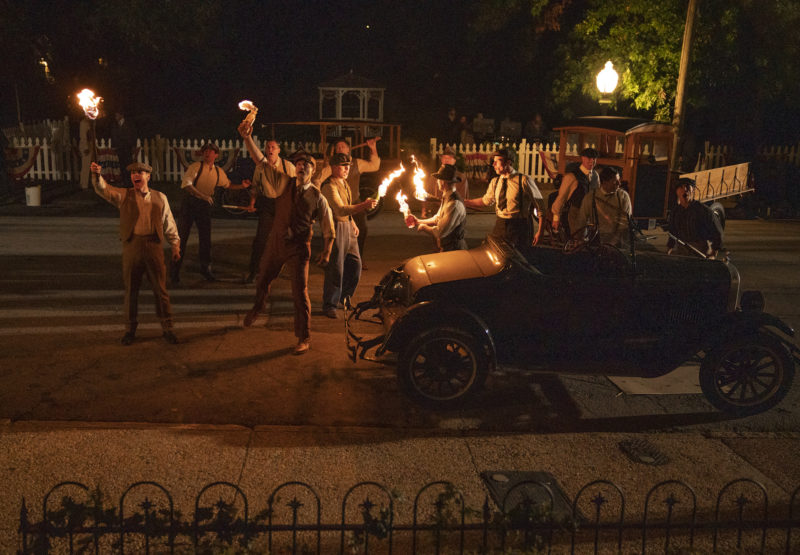 Lettie meanwhile heads off to find the Book of Names. On the way, she’s attacked by a car full of white men. She gets shot outside Montrose’s house, but nothing happens due to her invulnerability (from Episode 8). Montrose and Dora’s fathers scare the white men off. They then invite Lettie inside.

Lettie is horrified to realize that all these people are going to die soon (both Dora and Montrose’s entire families are killed in the riots, with only Dora, Montrose and George as the survivors). She wants to warn them, but she knows she can’t. Lettie comforts young Dora, who admits that she likes George.

Meanwhile, Atticus finally catches up to Montrose (from 2020) near a park. He says that Montrose can’t warn George about Ardham. Montrose says that he’s not trying to warn George. Instead, Montrose is trying to save Thomas, a boy he once loved. Thomas is going to get shot in the head during the riots, and he wants to save him. However, Atticus stops him. He says that if Montrose doesn’t end up with Dora, there’s a chance Atticus is never born.

But Montrose insists that won’t happen. He tells Atticus that Thomas was only the first “in a long line of sacrifices I made in order to be your father.” They look on as young Montrose tells Thomas that they can’t be friends anymore. Young Montrose calls Thomas a “faggot” and says that he’s not one.

Lettie is searching for the Book of Names when an older woman (Dora’s mother) walks in with a gun. Outside, the house is under attack. She demands to know who Lettie really is and what she’s doing here. Lettie hurriedly admits that she’s from the future. She says that she’s looking for the Book of Names. The woman is skeptical, but Lettie says she needs the book to save her great-grandson’s cousin, a cursed little girl names Diana. Lettie also shows that she knows about a birthmark that the woman has. When the woman is finally convinced, she understands that they all die here tonight. As the house catches fire, the woman hands over the book, along with the words needed to open it. 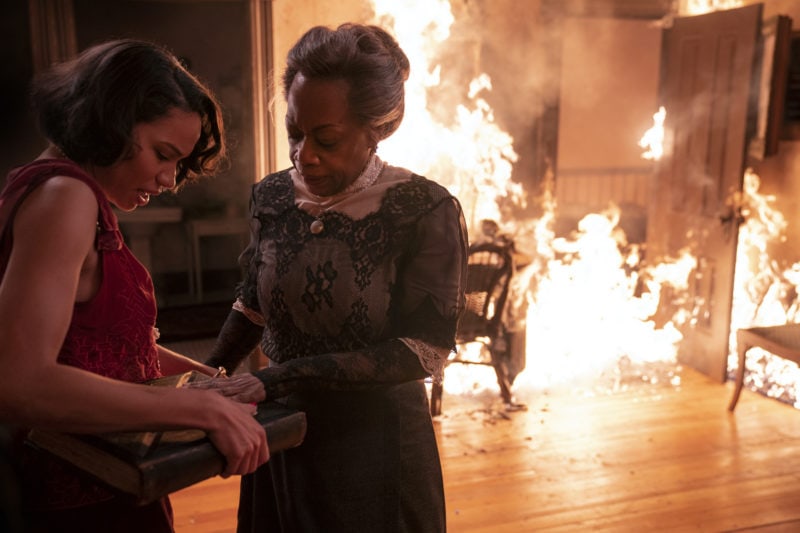 Back in the park, Montrose and Atticus sadly watch as the scene plays out. Cars full of white men show up and one of them shoots Thomas in face. Then, George and Dora ride up to save Montrose. While they are outnumbered, the white men only had one gun, so they’re able to fight them off initially.

Then, as Montrose watches on, he notes that something is wrong. Atticus knows, too, since it’s a story he’s heard many times. At one point, a man (the “mysterious stranger”) shows up from nowhere with a bat and beats up the white men. Then he says, “I got you, kid” and disappears. But as they’re watching, no one comes to save young George and young Montrose.

Atticus takes a step forward and sees that there’s a bat on the floor. Atticus then realizes that he’s the “mysterious stranger” who goes in and save the kids. He grabs the bat and rushes forth, taking out all of the white men before walking off.

Meanwhile, at the house, Lettie is invulnerable to fire, and she watches as the older woman is burned to death.