Book review and synopsis for Long Bright River by Liz Moore, An intimate family drama about substance abuse wrapped up in a mystery-thriller package.

In Long Bright River, Michaela "Mickey" Fitzpatrick is a police officer in Kensington area of Philadelphia, a lower-income neighborhood that has been hit hard by the opioid crisis. When a string of dead bodies are discovered, they soon identify that each involves the same M.O., a prostitute who is killed by strangulation.

The murders prompt Michaela to try to track down her estranged younger sister, Kacey, who is a sex worker and addict, only to discover that Kacey has gone missing for some time. As Michaela searches for her sister and the culprit, she's forced to come to terms with her childhood and the past that lead the two of them down divergent roads.

Mickey is a cop with a 4-year-old son, Thomas, in the Kensington area of Philadelphia, a low-income area struggling with the opioid crisis. She moved here to get away from Thomas's father, Simon. Mickey's estranged sister, Kacey, is an addict and a sex worker. When a series of strangulation murders of prostitutes begins to take place, Kacey has been missing for a while. Mickey begins to look for Kacey and recruits her former partner Truman, who is out on medical leave, to help. Her current partner is Eddie Lafferty. Meanwhile, Mickey's landlord, Mrs. Mahon mentions that a man has come by looking for her.

Mickey and Kacey were raised by their grandmother, Gee, because their parents are deceased (their mother died of an overdose and father left and later died). They were sent to an after school program run by the local police where Mickey was mentored by Simon Cleare, where he eventually seduced her. Meanwhile, Kacey began a slow descent into drug usage, dropped out of school and eventually got into sex work. We later learn that Simon found out about Kacey's sex work and impregnated her. So, Thomas is actually Simon and Kacey's child, though Mickey has full custody over him.

Mickey uses police resources to investigate Kacey's disappearance and tracks down a pimp and drug dealer named Connor "Dock" McClatchie she suspects is involved. At the same time, Mickey and Truman get a tip from a friend of Kacey's, Paula Mulroney, that a potential suspect in the strangulation murders may be a crooked cop who demands sex from prostitutes by threatening to arrest them. Truman suspects it's Simon. After Mickey pushes her supervisor, Sergeant Ahern, to look into the crooked cop, Mickey suddenly learns that she's now under investigation by internal affairs for mis-using police resources on looking into her sister. Mickey is suspended from the force. Soon, homicide arrests a man, Robert Mulvey Jr., they think is responsible for the murders.

Months pass. Mickey learns that Gee saw Kacey not too long ago and Kacey is pregnant. She also discovers letters in Gee's house that indicate her father, Daniel Fitzpatrick, is still alive. Mickey goes to Delaware to see him. Mickey finds out that her father is the man that Mrs. Mahon saw around her apartment a few months ago. He is sober now and wanted to reconnect with Mickey and Kacey. Daniel reveals that he's trying to help Kacey get sober, so she has been staying with him.

Despite Mulvey being in custody, another strangulation murder happens, and this time the victim is Paula Mulroney (Mickey had previously disclosed Paula as the source of her information about the crooked cop). After Paula's funeral, Kacey tells Mickey that her partner is rumored to be the crooked cop. At first she thinks Kacey is referring to Truman (former partner), but it turns out to be Eddie Lafferty (new partner). With Dock's help, Kacey and Mickey confront him and Lafferty is arrested. Lafferty is confirmed to be the killer (his ex-wife was one of the victims).

Afterwards, Mickey quits the force. Kacey has her baby. The monitor it for signs of substance withdrawal.

Long Bright River by Liz Moore came out last month, and I put it on my shortlist because I figured a family-type drama with mystery elements would be right up my alley. I’d actually never heard of Liz Moore before this, but this book was a Good Morning America book club pick, so it popped up on my radar.

Though Long Bright River contains many of the requisite mystery-thriller elements like plot twists and carefully placed “reveals,” it also has a fully formed and substantive family drama that serves as the book’s beating heart. The story of Mickey and Kacey and the role of substance abuse in their lives gets the full amount of attention it requires.

I would say for most mystery-thrillers, if there’s some type of character development and a relatively consistent personality for its characters, I tend to be pleasantly surprised. This book offers a lot more than that. Understanding how Mickey and Kacey become the people they are and understanding their two divergent paths are a large part of the story. The book works because the author clearly prioritizes the telling of that story.

I would say that is is probably more accurately described as a family drama about addiction, rather than a mystery. In that capacity, I think it succeeds moreso than as a mystery. If the sound of that appeals to you, then this book is one to consider.

The book moves a little slowly, especially for something marketed as a sort-of-thriller. I think the backstory and the insightful character details add a lot to the story, but I’m just saying this as a warning to anyone who’s expecting a high-octane murder mystery type novel. This is more of a human and family drama with a few thriller-mystery elements mixed in occasionally.

The book also deals a lot in the topic of drug addiction. It’s not a bad thing, but just something to be aware of if you have an interest or lack of interest in the topic. It also contributes to the feeling that this is kind of a depressing book. I think it’s probably realistic when it comes to substance addiction, but I wouldn’t describe this as a “fun” story.

There’s also no quotation marks in the book by the way, which was fine for the most part, though it slowed down my reading. Mostly, I just don’t see the benefit in leaving out punctuation unless it’s just a trite way of seeming “literary.” There’s one section where one character recounts a sequence of conversations to another and by god was it confusing. Seriously, punctuation exists for a reason, just use it.

Long Bright River is a sincere and intimate story about two sisters with troubled pasts, bound together with elements of mystery and suspense. It’s a book I really wanted to like more than I actually did. I thought the idea of a mystery novel with some more substance to it would be perfect for me. However, despite the meaningful and fully formed story at the novel’s center, I occasionally found this novel more relentlessly depressing than insightful.

Even with it’s many plot twists and turns, it’s a bit of a dreary and long book. There’s just a sense of hopelessness in the story that I didn’t really enjoy sitting with for the lengthy duration of the book. The lack of quotation marks also slowed down my reading. Getting through it was a slog, and I wouldn’t be surprised if a fair amount of people DNF this book.

If you’re a patient reader, you might still consider this book. The writing is competent and the story is substantive and dilligently constructed, but it’s still just a little bit of a lengthy downer. I think people who don’t typically read mystery-thriller novels might actually like it more than those who do. Mystery fans should be aware of what they’re getting into if they are expecting a faster-paced novel, since this is more of a long haul than a quick, snappy book. However, if you like the idea of reading a slow-burning family drama about addition, then this is one to look at.

Did you read this book? What did you think? Feel free to share your thoughts below! 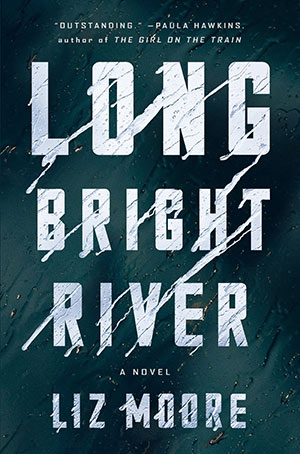 From the Publisher
In a Philadelphia neighborhood rocked by the opioid crisis, two once-inseparable sisters find themselves at odds. One, Kacey, lives on the streets in the vise of addiction. The other, Mickey, walks those same blocks on her police beat. They don't speak anymore, but Mickey never stops worrying about her sibling. Then Kacey disappears, suddenly, at the same time that a mysterious string of murders begins in Mickey's district, and Mickey becomes dangerously obsessed with finding the culprit--and her sister--before it's too late. Alternating its present-day mystery with the story of the sisters' childhood and adolescence, Long Bright River is at once heart-pounding and heart-wrenching: a gripping suspense novel that is also a moving story of sisters, addiction, and the formidable ties that persist between place, family, and fate.
Show More
Read an Excerpt
See it on Amazon
Share This
social & email
New Reviews
recent releases
New Posts
recently posted
Discussion and Replies