By James McBride, A lively and compassionate story about a shooting in the projects of South Brooklyn

Deacon King Kong by James McBride is not the type of book I ordinarily would have chosen for myself. If it hadn’t popped up on Oprah’s book club, I probably wouldn’t have given it much consideration.

Of course, having read it, I’m really glad I did and I hope others give it a shot, too.

Cuffy “Sportcoat” Lambkin is a 71-year-old deacon for a church in the projects. One day, he gets trashed and goes to the neighborhood plaza and shoots Deems Clemens, a ruthless 19-year-old local drug dealer. Sixteen people see the shooting, but no one talks.

In Deacon King Kong, author James McBride explores the aftermath of the shooting and the effect on both the people involved and others around them in this oft-neglected neighborhood in South Brooklyn. From the gangsters, to the church-goers and the cops sent to investigate, the shooting sets off a dramatic chain of events.

I typically associate books (and media in general) about drug dealers, drunks, shootings and/or gangsters with being full of machismo, in a way that I don’t have a ton of patience for. Book Oprah’s book club picks tend to be the opposite of that, so I suspected my initial assumptions about it might be wrong. After reading it, I can confirm that this is a absolutely a story that’s more about community and compassion and not at all about strutting around with big guns.

When Deacon King Kong starts, everything feels a little chaotic, and there’s tons of small pieces of information flying by. I started off a little skeptical, honestly. After the first few chapters, I put it down for a few days, unsure whether I’d finish it.

A few more chapters in though, the basic plot becomes clearer, and I felt more acclimated with McBride’s energetic writing style. By the time the story really starts to come together and a lot of the small details from the beginning gain new relevance, I knew I was going to be trying to convince people to read this book.

If you’re someone who likes stories about the underdog, then this is for you, cause this book is chock full of ’em. McBride writes from the heart, and the fondness and love he has for his imperfect, downtrodden characters and their neglected community shines through. In Deacon King Kong, this forgotten and disregarded community comes alive and is filled with warmth and personality.

McBride grew up in Brooklyn’s Red Hook housing projects, so I assume knows what he’s talking about when it comes to life in the projects. I would also assume that his love and respect for these characters stems from that as well. The book starts with a church deacon shooting a local drug dealer in broad daylight, but it brings in a whole cast of characters from their community and beyond and then binds them all together. McBride endows them all with vivid personalities in a way that makes you feel like he cares individually for each one of his literary creations.

Stylistically, the story is told in kind of a frenetic and almost playful kind of way. (To that point, I’d recommend reading an excerpt to help to determine if it’s to your taste. If you check it out and you’re on the fence, I’d encourage you to give it a shot.) The main character is a bit of a mess, and his discombobulated state makes for a number of humorous interludes, with an almost silly, slapstick atmosphere running throughout the novel.

However, the book’s humor and gamesome narration masks a very real story tackling a range of not-so-playful topics. Sportcoat is broken-hearted over the death of his wife and destruction of a community he worked so hard to repair. As their former baseball coach, he helped to raise the boys around him to become men, only to watch them become drug dealers, lured in by the false promises of rich, corrupt people that live far from the projects.

In the backdrop of Sportcoat’s personal struggles and hijinks, there’s also a drug war brewing in the projects. Multiple parties are vying for supremacy and to cut others out of the trade. As these stories came together, I was surprised at how much cleverness, heart and empathy it had.

Finally, if you’re like me, you might’ve read the title of the book and thought, what exactly is a deacon? It’s a fair question! And it’s also a running joke in the book (none of the characters seem to know what exactly a deacon is or does). After finishing the book, I can tell you, no, I still don’t know what a deacon is.

The TV series adaptation for Deacon King Kong was announced right after it was selected for Oprah’s Book Club. For all the details, see Everything We Know about the Deacon King Kong TV Series Adaptation.

I hope that people give this book a shot. I should warn you it’s not the easiest read initially, as the story feels a bit chaotic at the onset, but once you get a handle on his writing style and basic plot, it’s really not a difficult read. It’s also very funny in parts and written with a lot of warmth and compassion.

(And if you do find yourself getting a little lost, you can check out my synopsis / chapter-by-charter summary! There’s no shame in needing a little clarification!)

I really enjoyed this. This book is more on the literary side of what is typically considered a “book club read”, but I think this one would be a fantastic pick if you or your crew is up for something that falls firmly in the “literary fiction” category. It’s a worthwhile book that is well-deserving of the time required to read it.

What do you think? Have you read this, or is this a book you’d consider? See Deacon King Kong on Amazon.

In September 1969 in South Brooklyn, 71-year-old Deacon Cuffy Jasper Lambkin, also known as "Sportcoat", drunkenly goes to the plaza of the Causeway Housing Projects and shoots Deems Clemens, a 19-year-old local drug dealer. No one knows why he shot him. Sergeant Potts, an older officer, and his young partner, Officer Mitch, are sent to investigate and arrest Sportcoat. Sixteen people saw the shooting, but no one talks. Sportcoat is the deacon of the community church, Five Ends Baptist, and a good man. But he's also a drunk who has had a rough life and whose wife Hettie died two years prior. He still has imaginary conversations with her (often regarding some missing church funds that she took). He was also once the coach for the Causeway baseball team, and Deems was once its star player. However, after his grandfather died, Deems left to deal drugs and is now part of a network of dealers controlled by Bunch Moon. Everyone assumes Sportcoat is a dead man after the shooting, but Deems doesn't retaliate against Sportcoat because of their history. Bunch sends Earl, his right-hand-man, to rough up Sportcoat (to send a warning about disrupting his business), but Earl's attempts are comedically thwarted each time. Potts's investigation is also hindered by everyone's vague answers about Sportcoat's whereabouts, so Sportcoat remains a free man. Elsewhere in the Causeway, Tommy Elephante (the "Elephant") is a guy who deals in storing and moving contraband, though he refuses to mess with drugs. (Coincidentally, Sportcoat works as a gardener for Elephante's mother one day a week.) Tommy wants to marry a nice woman, move to a farm and get out of this life. He is approached by someone called The Governor, who knew his father, Guido, in prison. Guido was storing a valuable item (a small statue called the Venus of Willendorf) for the Governor before he passed away. The Governor has a buyer offering 3 million for it, and he wants Elephante's help so they can locate it and sell it together. Meanwhile, there's a drug war brewing. Bunch's supplier is Joe Peck, an Italian mobster, but Bunch has a plan to cut Peck out. Bunch also gets wind that Deems has an idea to cut Bunch out and deal with Peck directly. As a result, Bunch brings in a dangerous killer, "Harold Dean" (which turns out to be Haroldeen), to deal with Sportcoat, Deems and Peck. One night by the pier, Sportcoat wants to talk to Deems about giving up the drug trade and playing ball again. However, Haroldeen makes her move, shooting Deems, Sausage (Sportcoat's best friend) and Beanie (Deems's right hand man). Sausage survives, but Beanie dies. Deems falls in the water and nearly drowns, but Sportcoat saves him. Afterwards, Haroldeen (who works for but has been misused by Bunch) meets up with Bunch and gets half her money. The other half is due when the rest of the job is completed, but she betrays him instead and leads Peck to him. Peck and his men kill Bunch. After the pier shooting, Sportcoat realizes he wants to get sober. He goes to visit Sister Paul, one of the original founders of Five Ends Baptist. She tells him how Five Ends got started. It involved a young Guido Elephante preventing a young Officer Potts from getting shot. That same night, Guido asked a passerby, Sister Paul, for help in driving away some stolen cargo. Later, Guido repaid that favor by helping them secure the land for the church. He also asked them to hide the Venus of Willendorf statue for him, something only Sister Paul (and now Sportcoat) knew about. Time passes. Sportcoat relays this story to Elephante, and Elephante gets engaged to the Governor's daughter. They find the statute, and Elephante does his deal. Afterwards, Elephante helps Sportcoat by replacing the missing church money and paying to renovate the church. Twenty-two months after Sportcoat shot Deems, Sportcoat passes away. Deems is now playing pro-ball. Sportcoat knew that he would drink again, so he decides to go to the harbor instead where Hettie killed herself and walk into the water. As he does, he tells Sausage the water is beautiful and drowns himself. 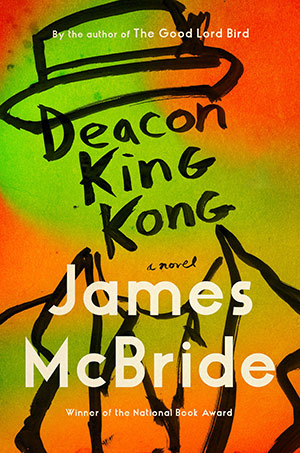 From the Publisher
In September 1969, a fumbling, cranky old church deacon known as Sportcoat shuffles into the courtyard of the Cause Houses housing project in south Brooklyn, pulls a .38 from his pocket, and in front of everybody shoots the project's drug dealer at point-blank range. The reasons for this desperate burst of violence and the consequences that spring from it lie at the heart of Deacon King Kong, James McBride's funny, moving novel and his first since his National Book Award-winning The Good Lord Bird. In Deacon King Kong, McBride brings to vivid life the people affected by the shooting: the victim, the African-American and Latinx residents who witnessed it, the white neighbors, the local cops assigned to investigate, the members of the Five Ends Baptist Church where Sportcoat was deacon, the neighborhood's Italian mobsters, and Sportcoat himself. As the story deepens, it becomes clear that the lives of the characters--caught in the tumultuous swirl of 1960s New York--overlap in unexpected ways. When the truth does emerge, McBride shows us that not all secrets are meant to be hidden, that the best way to grow is to face change without fear, and that the seeds of love lie in hope and compassion.
Read an Excerpt
See it on Amazon
Top Books
this month
Top Posts
this month
read more
Latest from the blog
25 Books Becoming Movies and TV Series in 2021