Main / Books / A Spark of Light

A Spark of Light

Book review and synopsis for A Spark of Light by Jodi Picoult, a story about a hostage standoff at an abortion clinic.

A Spark of Light tells the stories of the lives of a group of people when a man enters an abortion center in Mississippi and begins shooting. The shooting develops into a hostage situation, and the hostage negotiator soon learns that his teen daughter, Wren McElroy, is one of the hostages inside.

The novel is told in reverse chronological order, with each chapter going back one hour to explore the motivations and stories of the people on the scene and how they ended up there.

In this well-researched novel, Picoult uses her narrative to provide a thought-provoking and thorough look at the issues surrounding abortion.

A Spark of Light tells the stories of the lives of a group of people when a man, George Goddard, shoots up an abortion center ("the Center") in Mississippi. The book opens at the end of the hostage standoff. A number of people are dead. The last remaining hostage is Wren McElroy, daughter of the hostage negotiator, Hugh McElroy. In an attempt to save his daughter, Hugh offers himself up in exchange for Wren. After they make the switch, Wren walks towards safety, but George lifts his gun towards her and pulls the trigger.

From there, the story continues in reverse chronological order. As the book progresses backwards in time, it goes through each characters and how they ended up there:

George shoots the place up because his daughter, Lil, had an abortion at the center recently. George is a former military man who was dishonorably discharged from after he attacked two civilians in Bosnia (but only because they'd been trying to rape a woman). He returned home embittered, and his wife eventually left him to raise their daughter on his own.

Wren is a teenage girl who is at the Center seeking birth control because she's seeing a boy, Ryan, she thinks she loves. She was afraid to ask her dad, so she asked her Aunt Bex to bring her instead.

Bex is Wren's Aunt and Hugh's sister. She's an artist, and she has served as a mother figure for Wren after Wren's mother, Annabelle cheated on Hugh and left for Paris. Bex gets shot by George, but gets wheeled out for medical care. She survives. Bex brings Wren to the center because she is pro-choice, but she knows abortion is not something she'd consider for herself. At the very end of the book, we learn that Bex is actually (secretly) Hugh's mother from when she became pregnant at 14.

Olive is a retired professor who goes to the Center for health reasons, and she is told that she has Stage 4 cervical cancer. When the shooting starts, she and Wren try to hide in a closet, but are later discovered. At one point, the hostages stage a failed attempt to try to get the gun from George. In retribution, he goes to shoot Wren, but Olive jumps in front of the bullet and is killed instead.

Joy, a hostage, was at the Center for an abortion that day. Joy is a former foster child who was given up by her mother after Joy attacked her mom's boyfriend when he was assaulting her mother. Joy grows up in foster homes being bullied and molested. Later, she was working two jobs and putting herself through school when a handsome man, Joe, walked in. They saw each other a few times and, despite being on the pill, she got pregnant. When she told him, he told her he was married and ghosted her.

Janine is an anti-abortion activist who was spying on the Center's activities to try to find incriminating evidence of them forcing women into abortions. Janine has a brother with Down syndrome who she loves and she thinks all lives should be saved. However, she actually secretly once had an abortion as a teenager after getting drunk at a party where she was gang raped.

Dr. Louis Ward is the OB/GYN. He is a black man who was raised by his grandmother. His own mother died of a failed "home remedy" attempt at an abortion. Louis is shot by George, injuring his leg, but he survives.

Izzy is a nurse, who has just learned she was pregnant. She stops George from shooting her by telling him this. While the hostage situation goes on, she helps to take care of Dr. Ward and Bex after they are shot. Izzy grew up poor, but made her own way in life. Her boyfriend, Parker, has recently proposed. Toward the end of the book, we learn she is actually a nurse for a different hospital. She switched shifts with a co-worker of hers, Jayla, today to arrange for two days off to get an abortion.

In a hospital a few hours away, Beth is a 17-year-old who is being prosecuted for murder for having had an illegal abortion. She attempted it because her father had refused to provide consent and there wasn't time to obtain a judicial waiver. She ended up hospitalized after losing too much blood, and the nurse, Jayla, called the authorities. At the very end of the book, we learn that Beth's father is George Goddard (her name is Elizabeth Goddard and he calls her Lil).

In the Epilogue, we learn that when George had set his aim onto Wren, Hugh grabbed his gun to shoot as well. In the end, George is dead, and Hugh's arm is merely injured. Wren and Hugh leave together.

I was originally started reading A Spark of Light by Jodi Picoult when it first came out, but then I got distracted by other books.

However, after reading A Book of Two Ways, I’ve been wanting to revisit Picoult’s works. Even though I had mixed feelings about Two Ways, the writing was solid enough that I could definitely see why Picoult seems to have a solid following of fans that consistently read her books.

A Spark of Light is unapologetically a book about abortion. It uses its premise of a hostage situation taking place at an abortion clinic to explore a multitude of issues and parties involved in the procedure and presents a well-researched examination of the topic. And while the points of view of anti-abortion activists or prosecutors are represented in the story, this book is very much pro-choice, so you should decide for yourself if that will be a problem for you.

The main reason to read this book is that it really does present a lot of information and questions to help you consider your own beliefs about abortion. The plot itself is a little thin and comes second to all of that.

From there, I think the main warning I’d give to people about this book is that it’s a bit of a slog. For me, the book was strongest when it was introducing its characters and their backstories or making clear arguments for or against abortion. But there’s just a lot of filler in there and it drags so much when you’re waiting to see where exactly this is headed, since you already know how most of the storylines conclude due to the reverse chronology.

I’m just not sure if the reverse chronology added much to the story. In fact, I’m fairly sure it’s a large part of the reason why this book dragged so much for me. It felt gimmicky to me, and more importantly, it detracts from the suspense by revealing a lot about where the situation ends up. It makes for a lot of repetitiveness, too. As it goes back in time it sort of continually rehashes plot elements you already knew about.

I don’t really understand why Picoult chose to structure the narrative this way apart from as a gimmick that sounds interesting. This book ended up taking me a long very time to read, since I kept putting it back down.

This is a very issues-based book, so whether or not I’d recommend it can really be distilled down to whether or not you’re someone who wants to read a pro-choice book about abortion. Pretty much all of the storylines involve abortion and different issues, moral and legal, pertaining to it, so if it doesn’t interest you then neither will this book. The plot and even the characters are really secondary to the exploration of this topic.

There are bright points in A Spark of Light for sure, very informative parts and things that were moving or thought-provoking — but large parts of it felt like such a slog. I imagine this will be a DNF for quite a few people, even though the writing is solid and Picoult does a good job of exploring her topic. I just really, really struggled to get through it.

The reverse chronology in particular does the story a major disservice, resulting in a repetitive narrative lacking in surprises, and I really couldn’t tell what, if anything, it added to the narrative.

Ultimately, if abortion is a topic you’re wrestling with or are looking to form an opinion on or are just interested in, it’s worth giving this book a look since it is well-written and seems to be competently researched. For anyone else, I would be disinclined to recommend it.

See A Spark of Light on Amazon.

A Spark of Light Audiobook Review

I thought the audiobook was solid. I listened to a large portion of the book on audiobook, and I had no qualms with it.

I think it’s probably helped me get through some sections of the book that were proceeding a bit too slowly for my tastes. If you’re looking to read this book, audiobook is a good option; it’s helpful to be able to do some other tasks if you feel like the book is dragging a little.

Hear a sample of A Spark of Light on audiobook on Libro.fm.

Read the first pages of A Spark of Light

See Everything We Know About the 'A Spark of Light' Adaptation 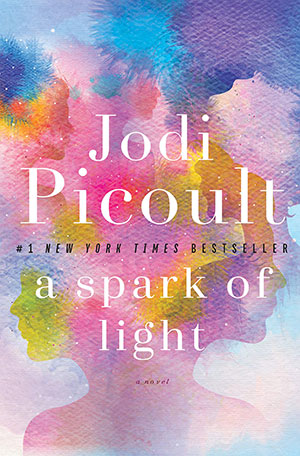 The warm fall day starts like any other at the Center—a women’s reproductive health services clinic—its staff offering care to anyone who passes through its doors. Then, in late morning, a desperate and distraught gunman bursts in and opens fire, taking all inside hostage.

Told in a daring and enthralling narrative structure that counts backward through the hours of the standoff, this is a story that traces its way back to what brought each of these very different individuals to the same place on this fateful day.

One of the most fearless writers of our time, Jodi Picoult tackles a complicated issue in this gripping and nuanced novel. How do we balance the rights of pregnant women with the rights of the unborn they carry? What does it mean to be a good parent? A Spark of Light will inspire debate, conversation . . . and, hopefully, understanding.