Book review and synopsis for A Good Marriage by Kimberly McCreight, a mystery slash legal drama with a convoluted plot.

In A Good Marriage, Lizzie Kitsakis is a criminal defense attorney who gets a call from a guy she used to know from law school, Zach Grayson. Zach is being held without bail for the murder of his wife Amanda. It's a lurid situation involving a sex party and a blackmail scandal among their community of friends.

What's more, as Lizzie investigates into the circumstances around Amanda's death, she finds that secrets from her own life are threatening to be revealed as well.

The book switches around from points of view / timelines and is interspersed with transcripts of grand jury testimony.

Lizzie Kitsakis is a criminal defense attorney who gets a call from a guy she used to know from law school, Zach Grayson, who is now a wealthy entrepreneur. Zach has been arrested without bail for the murder of his young, beautiful wife, Amanda. He wants Lizzie to represent him. There was a annual key party (partner-swapping sex party) that is hosted by one of Amanda's friends, Maude Lagueux, and Amanda was found dead afterwards. Lizzie begins to investigate by visiting the crime scene and asking a private investigator friend, Millie, to help. They find a print in the blood.

Before her death, Amanda was in charge of running Zach's foundation, which her friend Sarah handles the finances for. Amanda has also lately been getting a bunch of hang-up calls which Amanda fears is her father, who raped her repeatedly growing up. She finds a bouquet of lilacs with no name left for her from him as well. Amanda also gets a call from the foundation's accountant wanting to meet with her on an urgent matter, but she forgets about the meeting.

Meanwhile, at the private school where Amanda and her friends send their kids, there has been a hacking incident over the past few months where families of students have been subjected to phishing and hacking attacks to steal data off their computers and blackmail them. Maude and Sarah are both targeted. Maude is especially upset over her 15-year-old daughter being blackmailed into performing sex acts on camera.

Lizzie initially suspects Amanda's father is responsible, but discovers that he is dead. Amanda also has talked about a friend, Carolyn, who is dead as well. Amanda seems to have delusions about them both still being alive, likely due to her unresolved trauma from her childhood.

(There's a lot more details that points the blame at potentially Lizzie husband, Sam, or Maude's husband, Sebe, but all of these are red herrings. See the Section-by-Section Summary for all the details.)

When Lizzie contacts Zach's accountant to pay Millie, she learns that Zach is broke. (When Lizzie tries to quit, Zach blackmails her with a secret she kept from her boss about her financial troubles due to her husband Sam's drinking.) The accountant also says that Sarah was very stressed out about potentially losing her job. Lizzie soon learns from her boss's secretary, Gloria, that Sarah's husband Kerry is the Gloria's former boss. Kerry was working at Lizzie's firm before she got there. Lizzie learns that he was fired for harassing legal assistants.

Millie's analysis determines that Maude's prints are the ones at the crime scene. Lizzie confronts Maude who admits that she was at Amanda's house because she suspected Zach was responsible for the blackmail. Maude says she heard Amanda fall from the stairs and saw a tall man in red sneakers run out the door. Lizzie finds out from Sarah that Kerry wears red sneakers. She also confirms with the flower delivery boy that Kerry was the one who left the lilacs for Amanda (and likely made the calls as well).

Kerry is apprehended. In his statement, he explains that the death was an accident. He wanted to comfort her, but she flipped out and started hitting him and fell down the stairs. Lizzie gets Zach to admit he was responsible for the blackmail on a recording. (Attorney-client privilege doesn't cover on-going crimes, so Lizzie is free to report him for that federal crime.) Sam goes to rehab.

So, I just finished reading A Good Marriage by Kimberly McCreight and, oh my goodness, is this a convoluted plot or what. I had really high hopes for this book since it seems to have some really solid reviews and even got picked up to be adapted into a movie. Sadly, it was a bit of a disappointment for me, though I do think there’s some people who might like it.

I’m going to keep this review pretty short, but let me start with some positives first. I loved that the book is very accurate in terms of the legal proceedings and things of that nature. If you like legal dramas, you might really enjoy parts of this book.

Author Kimberly McCreight is a former lawyer and her expertise really does help to take the book up a notch in terms of the technical details. In general, you’re lucky if a mystery novel doesn’t blatantly get things wrong that even most laypeople would know. A Good Marriage really tries to be accurate in terms of all the legal details and it makes for a better story.

I also think the writing is largely solid. I was really enthusiastic about this book for a long while as I was reading it.

The problem is, this book is really convoluted and the plot does not come together. I’m not going to spoil it here, but suffice to say that the ending does not reward the time you spent reading this book. Everyone in this book has some type of secret and some of it plays into the plot while other parts don’t, but it’s a lot. There’s all sorts of schemes, lies, blackmail, sexual assaults and harassment, deaths, trauma, alcoholism, cancer, and everything else going on that it just seems like overkill. It’s like multiple seasons of a soap opera packed into one book.

I could tell even as I was reading it that there was no way it was going to form a cohesive plot at the end. In addition to the dissatisfying ending, there’s also a bunch of loose threads at the end and too much of the plot is bound together through coincidences that defy any persons’s ability to suspend their disbelief.

The narrator for the “Lizzie” point of view spoke in a slightly nasal and unnatural voice trying to sound like a a very serious person or something I don’t know what, but it irritated me quite a bit after a while. The narrator for “Amanda” was okay, but sounds so over dramatic and strained pretty much throughout the whole thing that it got kind of irritating too.

This is pretty subjective, but I personally didn’t love this audio book. I was planning on listening to the whole thing via audiobook but gave up on it eventually and went back to reading the paper version instead.

I think if you’re someone who is very interested in the legal details or are a hardcore mystery fan who loves really gnarled and convoluted story lines (and doesn’t mind some plot problems), you might still like this book. I think those are pretty specific types of people though.

For most people, I would just say this one is probably a pass. There’s so many better mysteries out there. One that I read recently and really enjoyed was Home Before Dark by Riley Sager.

See A Good Marriage on Amazon.

Read the first pages of A Good Marriage

See Everything We Know About the 'A Good Marriage' Adaptation 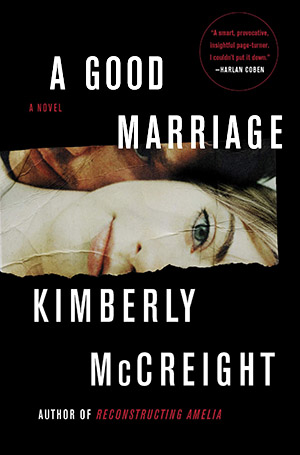 From the Publisher
Lizzie Kitsakis is working late when she gets the call. Grueling hours are standard at elite law firms like Young & Crane, but they’d be easier to swallow if Lizzie was there voluntarily. Until recently, she’d been a happily underpaid federal prosecutor. That job and her brilliant, devoted husband Sam—she had everything she’d ever wanted. And then, suddenly, it all fell apart. No. That’s a lie. It wasn’t sudden, was it? Long ago the cracks in Lizzie’s marriage had started to show. She was just good at averting her eyes. The last thing Lizzie needs right now is a call from an inmate at Rikers asking for help—even if Zach Grayson is an old friend. But Zach is desperate: his wife, Amanda, has been found dead at the bottom of the stairs in their Brooklyn brownstone. And Zach’s the primary suspect. As Lizzie is drawn into the dark heart of idyllic Park Slope, she learns that Zach and Amanda weren’t what they seemed—and that their friends, a close-knit group of fellow parents at the exclusive Brooklyn Country Day school, might be protecting troubling secrets of their own. In the end, she’s left wondering not only whether her own marriage can be saved, but what it means to have a good marriage in the first place.
Show More
Read an Excerpt
See it on Amazon
Share This
social & email
New Reviews
recent releases
New Posts
recently posted
Discussion and Replies