In You Love Me (You #3), Joe Goldberg is back. And he's going to start a family--even if it kills him.

You Love Me picks up after Joe has been in jail for nine months while being held for trial, and ultimately released, for his crimes. The Quinn family paid his legal fees because Love was pregnant with their son, Forty (named after Love's deceased brother). After his release, they paid him $4 million to walk away from Love and the child (and threatened to kill him otherwise).

Joe is now living on Bainbridge Island and has his eye on his new boss, Mary Kay DiMarco, a librarian at Bainbridge Public Library who has dreams of owning her own bookstore some day. She has a teenaged daughter, Noni. With his new start, Joe is determined to resist his impulses, and he promises himself he will not kill for Mary Kay. Joe and Mary Kay become closer. They finally kiss, but Mary Kay says she just wants to be friends. Still, Joe continues to build up a relationship in his head. Then, one day, he finds out Mary Kay is married. Joe chides himself for trying to be a "good guy" and not properly stalking her.

Joe soon learns that her husband, Phil DiMarco (Noni's father), is an 90's rock star and a former addict. Joe is determined to end their marriage. Joe befriends Phil (pretending to be "Jay", a fellow Narcotics Anonymous member and a fan of Phil's) to try to push Phil back into using drugs. Joe also breaks into their house and sabotages stuff in order to prompt fights between the two of them.

Mary Kay's close friends are Melanda and Seamus. With Joe back in full stalker mode, Melanda, catches him stalking Mary Kay's house. She attacks him, and he locks her up in his Whisper Room, an audiobook recording studio in the basement of his house built by the previous owners. Melanda admits to having a 10-year-affair with Phil in order to give Joe dirt on herself so that he'll let her go. She promises to leave quietly because she is unhappy with her life anyway. However, while Joe contemplates it, Melanda kills herself.

When Joe goes to dispose of her body, he gets caught by Oliver, a private investigator that the Quinn family sent to keep an eye on Joe. Oliver knows Joe received a big payout from the Quinns, and Oliver wants Joe to buy stuff for him in exchange for his silence. Joe agrees.

Meanwhile, Mary Kay likes Joe, but she's also trying to repair her marriage with Phil, even after she learns of his affair. Things stall until Joe (as "Jay") convinces Phil to blow off Mary Kay one night, and Mary Kay finally demands a divorce. She starts secretly seeing Joe until Phil overdoses and dies. Phil's brother Ivan, a successful life coach, then comes into town and convinces Mary Kay to dump Joe. However, Joe finds a #MeToo accusation about Ivan online and publicizes it. More accusers come forward, and Ivan unravels. Ivan ends up in rehab, and Ivan sells off the house Mary Kay was living in (which he owned) to pay his legal fees.

Finally, Mary Kay and Joe are able to really be together. After Mary Kay tells Noni about the relationship, they move in together, and Joe is delightfully happy. However, one night, Love contacts him to order him to come to Los Angeles to visit. Joe reluctantly goes to see her, where she accuses him of not loving her. Then, she shoots him and herself. Love dies, but Joe survives. Afterwards, Joe recuperates in a hospital.

When Joe returns to Bainbridge, Mary Kay is angry with him. Joe is then kidnapped by Mary Kay's friend Seamus who is angry with him for not deserving her. At first, Joe thinks that Seamus is in love with Mary Kay. Then, he realizes that Seamus has been sleeping with Mary Kay's daughter, Nomi. He thinks Joe wants her, too. Oliver, who has been monitoring Joe, stops Seamus and kills him.

Afterwards, Joe is determined to win Mary Kay back. He proposes and she accepts. They have a small backyard wedding (though they haven't filled out the paperwork yet). However, Nomi thinks, inaccurately, that Joe has done all of this to be with her. When he finally tells Nomi clearly and definitively that she is mistaken, Nomi is distraught. It results in a fight with Mary Kay where Nomi pushes her down the stairs. Mary Kay ends up in a coma, and Joe moves to Florida to open a bar slash bookstore.

The book ends with a customer walking in that sparks Joe's interest.

You Love Me (You #3) by Caroline Kepnes is the third book in the series (and Season 3 of the Netflix show “You” will be adapting this book), and it’s scheduled to be released on April 6th 2021.

It’s also exactly what fans of the series have been hoping for. The charming but delusional Joe Goldberg is back, and he is just as psychotic and Joe Goldberg-y as ever.

As the story opens, Joe’s been transported into the suburbs, living in Bainbridge Island in Washington. His child has been born, and he’s spent the last few months in jail while being held for trial from his crimes. He was released thanks to fancy lawyers paid for by the Quinn family, but they also offered him a non-voluntary payoff (as in, take it or get shot) to stay away from Love and his son.

Joe is determined not to kill anymore (too complicated!), but that doesn’t mean he doesn’t have some twisted ideas up his sleeve. With inventive new mind games to play and deranged schemes to enact, Joe still manages to get himself into plenty of trouble, even as he tries to be a “good guy” and act however he thinks “good guys” act (hint: he’s still not a good guy, but he’s certainly entertaining).

This time around he’s more into psychological mind games, and Joe’s relationship with his new love interest deals with more “adult” issues (like raising a child or everyday things like who buys trash bags) compared to his previous romances. And let me tell you, I am so here for all it. With a third book, you want it to have the same feel without being a repeat of everything that’s happened before, and I think Caroline Kepnes nailed it by adding just enough new elements to keep things feeling fresh.

I also loved that Kepnes plants subtle hints about her plot twists in the book. Instead of having completely random things occur to shake up the plot, she gives small indications of the nature of her characters if you read carefully. (I hope it’s something that gets reflected in the show. )

I should be clear that this book is about a psycho in a ridiculous story with some other psychos mixed in. It’s nonstop drama and unapologetically twisted. So, there’s a fairly specific audience for this book, but if you’re one of those people, Kepnes seems to know exactly what she’s doing. She keeps a steady hand on her off-the-rails plotline, and she writes it in a way that is exciting and often clever.

There are a few turns of the plot that are overly convenient and some resolutions that aren’t entirely satisfying, but in general it’s a fun ride, in a crazy and unpredictable way. 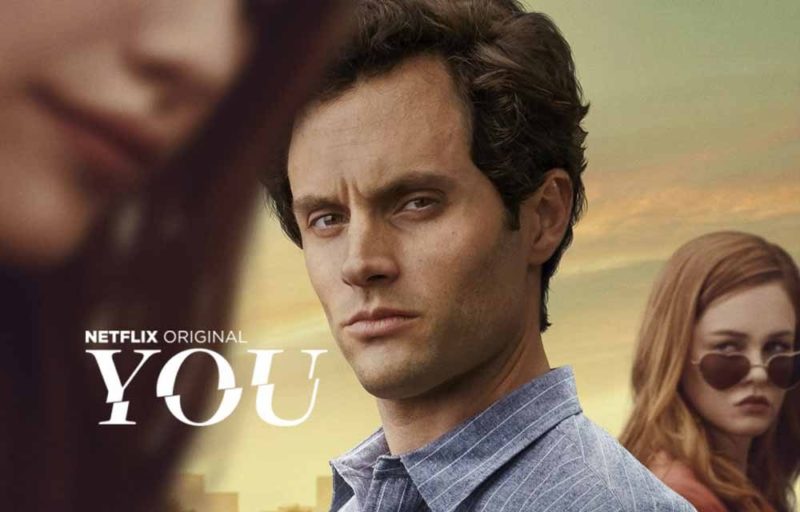 You Love Me is full of the twisted thrills and sticky situations that fans of the series have come to delight in. This is one of the easier (and shorter) reviews I’ve written because it’s pretty easy to identify the audience that would enjoy this book. Simply stated:

If you loved the book series or the show, I have fantastic news for you. You Love Me is probably exactly what you are hoping for it to be, and I think you’ll enjoy it. I had plenty of fun reading it. There’s lots of surprises, twists and utterly unhinged Joe-Goldberg-ness in store.

If you weren’t into the previous books and/or didn’t like the show, I have bad news for you. This book is not going to change your mind. You will not like it.

You Season 3: the Book versus the Show

If you’re following the show, you’ll remember that Season 2 ends with Joe moving out to the suburbs with his equally psychotic girlfriend, Love. He talks about wanting to start a family, etc.

But then he says that maybe it was all in order to meet “you” — and we see that Joe is creepily (of course) watching his neighbor, a woman reading a book with a stack of other library books next to her, from behind his fence while he thinks to himself that he’ll be seeing her “soon”.

While the show is some time away from airing (it’s scheduled to film between November 2020 through April 2021), I’ll be tracking differences between the third season of Netflix’s You and You Love Me (which Season 3 is adapting) over here:

You Love Me by Caroline Kepnes is the third novel in her You thriller series. In You Love Me, Joe Goldberg is back. And he's going to start a family--even if it kills him.