Main / Books / Where the Crawdads Sing

Book review and synopsis for Where the Crawdads Sing by Delia Owens, a coming-of-age crime drama about a girl growing up alone in the marshes of North Carolina.

In Where the Crawdads Sing, Kya is known in her town as the "Marsh Girl." She grows up in a shack out in the marshes bordering a small village on the coast of North Carolina. Her mother and her four older siblings all leave to get away from their abusive father, leaving her behind to fend for herself. Eventually, her father disappears as well.

Where the Crawdads Sing is part bildungsroman and part crime drama, centered around Kya, a wild and unkempt girl. The book follows the ups and downs of her life. She lives a lonely life, but her story is a hopeful one as well. With a little help, she's able to survive and even learn to read.

Despite her status as an outcast, her natural beauty catches the eye of two men in town. However, when the body of Chase Andrews, the local hotshot, is discovered in the marshes, she quickly becomes a prime suspect. The fragile life she has struggled and fought so hard to build is at risk.

Where the Crawdads Sing by Delia Owens opens with a picture of a map and the discovery of a dead body in the marshes of North Carolina.

I was intrigued immediately when I saw it in the bookstore, though I put off reading it for a while. Ultimately, though, my curiosity won out as it hung in the bestseller lists, and I’m very glad it did.

Where the Crawdads Sing is about resiliency and survival, but also alienation. I loved the part about Kya’s childhood; it made for a unique story line as Kya learns to navigate the world on her own. The story focuses thematically a lot on her status as an outcast and sense of abandonment, as she is forced to fend for herself. In terms of pacing, it is eventful and mostly fast-moving.

Kya’s story has elements of romance, mystery and even a courtroom thriller interlude. Nature enthusiasts will also enjoy this book, as Kya’s love of the nature around her is conveyed through detailed descriptions of the flora and fauna, a reflection of the author’s background as a former wildlife scientist.

The compelling imagery is descriptive in the right places and sparse when it serves the story better instead. The book has a strong sense of place, transporting you to a different life where you can smell the salty air and sink your feet into the muddy grounds outside the seaside village.

Meanwhile, the discovery of a dead body leads to the Chase Andrews investigation that provides the suspense in the story. Kya’s story is also interspersed with flash-forwards detailing the progress of the investigation. I found this worked well, adding an element of mystery, since it’s not clear how it will play out for Kya or what exactly happened that night. There’s compelling evidence on both sides and the pacing of the investigation is spot-on, making for pleasurable and suspenseful reading.

As she heads into her teenage years, the romantic storylines start kicking in, and the melodrama starts ramping up as well. My enthusiasm waned a little bit at this point. The book is increasingly divorced from reality (the idea that a teenage boy would teach her not only to read but about her period seemed far-fetched, and it goes on from there) and plot events get a bit contrived.

Additionally, Kya’s internal journey, her mentally processing the events of her life, felt a little surface level. She struggles with being abandoned by her mother, and the book brings in interesting parallels to nature, but beyond that, events simply happen without much reflection. It felt like there were a number of missed opportunity for it to be a more insightful book.

But, for whatever criticisms I had while reading, the story easily won me over. As it approaches the date of the crime and the investigation ramps up, I was totally engrossed.

I read this book quickly and found myself delighted by it by the end. The book is more melodrama than a serious literary novel, but is such an engaging story that it’s easy to accept. It’s part romance, mystery, courtroom drama and ode to nature, all of which make for an appealing tale about the town outcast.

The setting is a distinctive “slice-of-life” that’s commonplace, yet not often portrayed clearly in books or movies. It is vividly drawn in a way that infuses the story with energy, a credit to Owen’s genuine love and respect for nature.

Where the Crawdads Sing has been very popular among book clubs, and deservedly so. It’s eventful and accessible, but thoughtfully written, all of which make it a good choice for readers of varying tastes. See it on Amazon or Book Depository.

Where the Crawdads Sing, Explained!

See Questions and Explanations for Where the Crawdads Sing.

Read the first pages of Where the Crawdads Sing

See Everything We Know About the 'Where the Crawdads Sing' Adaptation 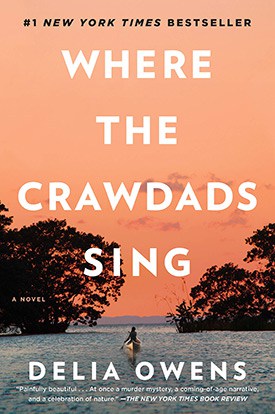