Where the Crawdads Sing: Questions and Answers (Spoilers, Ending, Etc.)

There are a number of questions that get asked pretty frequently about this book, so I thought I’d just answer them here. (Answers that contain spoilers will be hidden — click on the Show/Hide link to view.)

For the full review and a detailed summary of the plot, see the Summary and Review for Where the Crawdads Sing. 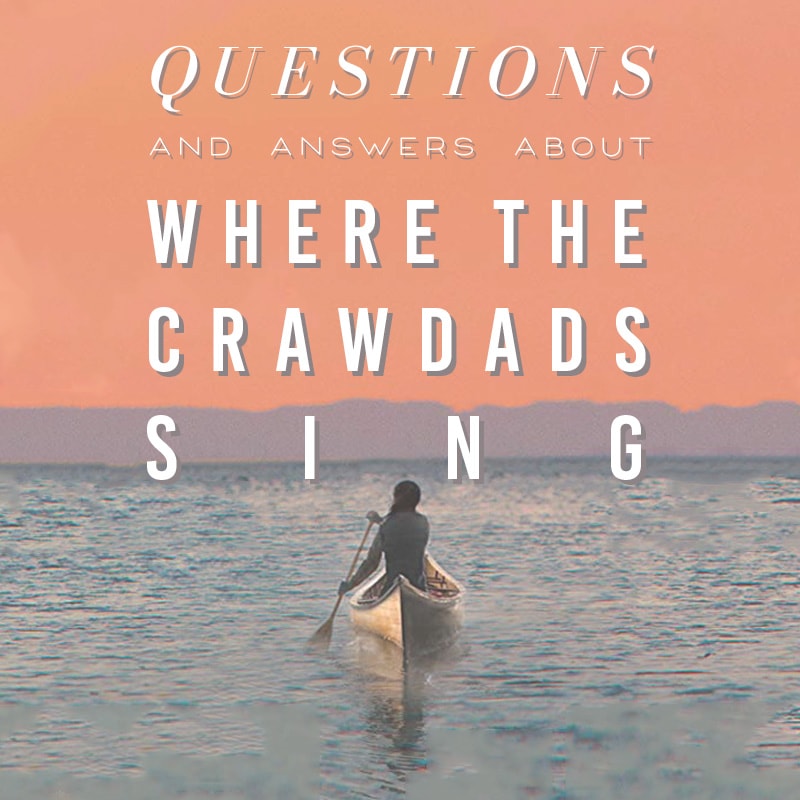 Where can I find a full plot summary of Where the Crawdads Sing?

Right here! Summary and Review for Where the Crawdads Sing. (Note: you’ll need to scroll to the very bottom of the page and click “Show/Hide the Detailed Plot Summary (Spoilers)”)

What is the meaning of the title of the book “Where the Crawdads Sing”?

The title of the book is pulled from a phrase the Tate says, though it’s actually also something from Delia Owen’s own life.

In the book, when Tate and Kya are looking for a place to hang out, Tate suggests that they go somwhere “where the crawdads sing.” He explains to Kya that it means “far in the bush where critters are wild, still behaving like critters.” In other words, he’s suggesting they go off somewhere far from other people, deep into nature.

From the book: “Well, we better hide way out there where the crawdads sing. I pity any foster parents who take you on.” Tate’s whole face smiled.

“Just means far in the bush where critters are wild, still behaving like critters.”

Throughout out the book, Delia Owens shows a great fondness for the natural world and her past work as well as the title of this novel are a reflection of this.

Delia Owen discusses this further in an interview with Hello Sunshine. “When I was a young girl growing up in south Georgia, my mother encouraged my girlfriends and me—whether we were exploring on foot or riding our horses—to venture as far into the oak forests as we could go. She wanted me to experience true nature, to find that place where the deer and foxes still behaved as they always had in the wild. She’d say, “Go way out yonder where the crawdads sing.” And we did.”

Let’s talk about actual science. Do Crawdads Sing? Like the actual animals?

They will produce a series of pulse trains that is believed to signal an individual’s presence to other crayfish. It is also believed that they produce sounds to alert other crayfish to predators, or to attract a second predator to prey upon the predator.”

Show/Hide Answer
At the end of Where the Crawdads Sing, Kya is acquitted for the murder, and Kya realizes that she loved Tate all along. They start a life together and turn the shack that Kya lives in into a nice cottage.

As the years pass, Jumpin’ passes away, and Jodie gets married and has kids that he brings by. The village grows into a city, but Tate and Kya never visit either way.

Kya does not kill herself. Instead, she passes away at 64 while she’s out in a boat collecting stuff (“her heart had quietly stopped”). Tate has “The Marsh Girl” inscribed on her headstone.

As Tate goes to look through her possessions he finds a hidden compartment with poems by a local author (these are referenced throughout the book). He realizes the poet was Kya, writing under a nom de plume all these years. There is one poem about murdering Chase, and with it is Chase’s missing shell necklace, tying her to his murder.

Who Killed Chase Andrews? Did Kya (“The Marsh Girl”) Murder Chase in Where the Crawdads Sing? How did Chase Andrews die? And why was he killed?

Show/Hide Answer
Yes, Kya was responsible for the death of Chase Andrews. Basically, at the end of the book, we find out that Kya has been writing and publishing poems under a pen name. Tate, her husband, finds one of these poems (that Kya wrote) along with the necklace that ties Kya to the murder.

If you read the poem (see the full text of it below) that’s with the necklace, you’ll see how it clearly describes the situation with Chase and what happened. She lured him to the tower and then she left the grate over the last stair open so he could fall through. (“The last step, a trap. Down, down he falls, His eyes still holding mine / Until they see another world.”)

The necklace ties Kya to the murder because Chase was supposed to have worn it all the time, but it was missing from the scene of the crime. Instead, Tate realizes that Kya has had the necklace all along.

I think the question of “why” Kya chooses to kill Chase (and whether it was justified) is something that’s up for book clubs to debate. Obviously, legally it was definitely not justified. Kya had a lot of reasons to dislike Chase. He dated, tricked and cheated on Kya (he was seeing someone else so he wouldn’t introduce her to people and got engaged while he continued letting her believe he wanted to marry her). Then after all that, he later goes back to see her and attempts to sexually assault her.

Beyond that, after the sexual assault, she worries that he will feel the need to have the “last word” after she left him sprawled on the dirt, and she doesn’t want to live in fear waiting for him to come at her again (“She’d learned over and over from Pa: these men had to have the last punch. Kya had left Chase sprawled on the dirt. The two old fishermen had probably seen her flatten him. As Pa would have it, Kya had to be taught a lesson.” “Chase would not let this go. Being isolated was one thing; living in fear, quite another.”).

The assault happens on August 30th and a month later he’s dead.

What is the poem at the end of Where the Crawdads Sing?

Luring him was as easy
As flashing valentines.
But like a lady firefly
They hid a secret call to die.

A final touch,
Unfinished;
The last step, a trap.
Down, down he falls,
His eyes still holding mine
Until they see another world.


I saw them change.
First a question,
Then an answer,
Finally an end.

And love itself passing
To whatever it was before it began. A.H.

Is Where The Crawdads Sing based on a true story?

No, Where the Crawdads Sing is a work of fiction.

What is the “Marsh Girl” / Kya’s full name in Where the Crawdads Sing?

What race is the character of Kya in Where the Crawdads Sing?

Kya refers to herself as “white trash” at one point, so I think we can safely assume that she and her family are white.

Is there a Where the Crawdads Sing movie or film adaptation?

It’s in the works. For all the details, see Everything We Know about the Where the Crawdads Sing Movie.

Still confused over something? Drop a comment below and I’ll try to answer if I can! :)