Book review and synopsis for Transcendent Kingdom by Yaa Gyasi, a profound and powerful exploration of family, science, faith and addiction.

Transcendent Kingdom is about Gifty, a sixth-year PhD student in neuroscience who was raised in a deeply religious family. She is studying how to adjust behaviors by triggering neurons in the brain through experiments with mice. Her own brother, Nana, died from a heroin overdose when she was 11, and her mother ended up in a deep depression as a result. Gifty's research is aimed at addressing both these things. When her brother died, Gifty also lost her faith, and it's something she continues to grapple with.

Gifty is a 28-year-old sixth-year PhD student in neuroscience who is studying the effect of drugs on the brain through experiments with mice. Her older brother, Nana, died from a heroin overdose when Gifty was 11, which led to her mother into a deep depression. Gifty's research is aimed at understanding and modifying reward-seeking behaviors, both in cases of too much (addiction) and too little (depression) reward-seeking.

The book intersperses stories of Gifty's past with her current life and research. Her parents were Ghanaian immigrants who moved to Alabama after Nana was born. Gifty's mother is deeply religious, and she had been the one who had once insisted on moving to America. The move made Gifty's father miserable, but Gifty's mother rooted herself in a local church. Gifty's father eventually moved back to Ghana by himself when Gifty was still young, leaving a gaping hole in their family. Nana was 11 at the time and Gifty was preschool aged.

Now, Gifty's mother is depressed again and goes to Stanford to stay with Gifty. Gifty takes care of her mother and runs her lab experiments. Early on, she experimented to determine that some mice would continue to push a lever that gives a reward (food), even when they will sometimes receive pain (shocks). From there, she identified two potential neurons that moderate that reward-seeking behavior. Now, she is in the process of using optogenetics (using light to control neurons) to see if triggering those neurons will adjust the mice's behavior. It's science that could eventually transcend its usage on mice to help manage reward-seeking behaviors in humans. It's also part of Gifty's attempts to understand her mother and brother.

After their father left, Nana was angry and resentful over his father's absence. Nana discovers basketball at 13 and becomes a star player. His sophomore year, he hurts his ankle and is put on Oxycontin. He gets hooked and his addiction grows into a two-and-a-half-year drug problem, ending with his death.

After Nana dies, Gifty loses her faith in God. Through much of the book, Gifty tries to reconcile and process her conflicted thoughts about her faith. It's mixed in with her feelings about the racism and contempt she encountered while Nana was in the throes of addiction. Meanwhile, her mother is deeply depressed after Nana's death. When her mother attempts suicide, Gifty is sent to Ghana to stay with her Aunt Joyce for the summer.

In present day, her mother's has good days and long stretches of bad days. Meanwhile, Gifty has some doubts about her science, with the slow pace of the progress and frustration over the limits of neuroscience, such as the fact that it still doesn't answer the question of why things like addiction occur in the first place. However, her experiment works, and she is able to stop a reward-seeking mouse from pushing the lever. Gifty, who tends to be a loner and unable to let people in, also gets to know Katherine, a fellow neuroscience PhD and a former psychiatrist. Katherine is persistent in her attempts at friendship and Gifty slowly allows Katherine to help support her as a friend.

Gifty comes home one day to find her mother missing. She ultimately finds her mother in a swimming pool in her pajamas. Gifty is frantic, but even in her disjointed state, her mother assures Gifty that she will be okay, and that God is always with her. Gifty drives around not knowing what to do, but finally tells herself that everything will be okay.

The book ends by flashing forward to Gifty being married to Han, her old lab mate, who she has a trusting and healthy relationship with. Her mother is now passed away, but she died at home, in bed and with her caregiver to help. Gifty still visits church and no longer has doubts about her faith. Before she leaves church each time, she lights two candles.

Transcendent Kingdom by Yaa Gyasi (pronounced Yah Jessi) is the sophomore novel from the author of Homegoing, her 2016 novel that has been widely lauded all around. Her new novel, Transcendent Kingdom, has been one of my most anticipated books of this year.

I admit that part of my curiosity was just to see if Gyasi was able to follow up with an equally impressive second novel. I’m glad to report that with the release of Transcendent Kingdom, Yaa Gyasi has left little doubt that she is one of the best writers around right now.

Transcendent Kingdom is a powerful and profound novel that tackles a lot of topics, but they all form one cohesive (and rather emotionally devastating) narrative about an immigrant family that has come apart.

While the story is told achronologically, it’s not difficult to follow. It tracks this family from their origins in Ghana, to their move to America, their early struggles and later losses. Eventually Gifty, the main character, becomes a PhD student at Stanford where she continues to work through her past through her research.

Structurally, this book is so well done. I loved the way Gyasi interlaces information about Gifty’s research with the story of Gifty’s family. It uses clever juxtapositions of scenes and ideas to help iliicit comparisons for the reader to understand Gifty’s experiences. It’s done in a way that feels very exactly constructed, and the story is made stronger because of her careful crafting of this family’s narrative.

I normally shy away from books heavy on discussions of religion, simply because it’s not something that I have ever really grappled or struggled with. Gyasi’s discussion of faith, and her characters’ conflicts about faith, in a way that feels relevant and critical to the narrative, so I found myself still being interested in those parts of the book.

Gyasi also breaks down her arguments about addiction and depression, and their causes, with clearly thought out specificity that is backed with research and science. While there are plenty of books that offer intimate and emotional portrayals of these things, I have never read a work of fiction that offers that while also breaking down the motivations of its characters in such a informed and coherently articulated way.

For example, Gyasi points out that much of what drives addicts is the pursuit of “reward” from their vices and how “anhedonia” (the inability to derive pleasure from normal things) plays into the pursuit of that reward. After reading Transcendent Kingdom, I realized that the reason that I’ve stayed away from any type of substances (no smoking, no drugs and rarely drink), despite trying all of them at various points, is probably not because I am so strong-willed, but because I have never gotten much “reward” while doing any of those things (not to mention, they also make me feel like garbage afterwards).

As a follow-up to Gyasi’s points, I would be curious to see if substance abusers are somehow wired to derive more pleasure than the average person from those substances.

Transcendent Kingdom is a beautifully crafted book that offers a unique level of depth and thought, and it is definitely well worth reading if the topics it deals with interest you. It’s also still worth considering at least even if they don’t specifically interest you. It’s an exploration of immigrant experience, a story about coping with grief and loss, a story about addiction, and it depicts a woman trying to reconcile her religious upbringing with her interest in science.

This book is fairly heavy on religious discussions of sin and prayer and faith, etc., as you may have guessed from the image on the cover of a woman praying. So, you can be the judge of whether or not that is something that you want to read about. However, I have little to no interest in those things, and I loved this book.

If you’re on the fence about this one, I’d encourage you to go for it. It’s a very good book. 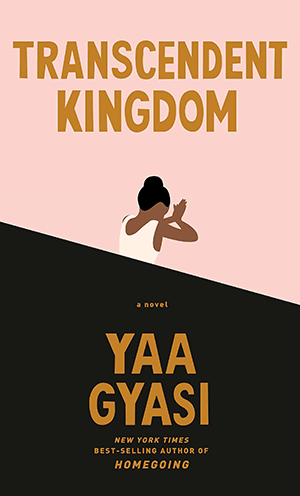 From the Publisher
Gifty is a sixth-year PhD candidate in neuroscience at the Stanford University School of Medicine studying reward-seeking behavior in mice and the neural circuits of depression and addiction. Her brother, Nana, was a gifted high school athlete who died of a heroin overdose after an ankle injury left him hooked on OxyContin. Her suicidal mother is living in her bed. Gifty is determined to discover the scientific basis for the suffering she sees all around her. But even as she turns to the hard sciences to unlock the mystery of her family's loss, she finds herself hungering for her childhood faith and grappling with the evangelical church in which she was raised, whose promise of salvation remains as tantalizing as it is elusive. Transcendent Kingdom is a deeply moving portrait of a family of Ghanaian immigrants ravaged by depression and addiction and grief--a novel about faith, science, religion, love. Exquisitely written, emotionally searing, this is an exceptionally powerful follow-up to Gyasi's phenomenal debut.
Show More
Read an Excerpt
See it on Amazon
Share This
social & email
New Reviews
recent releases
New Posts
recently posted
Discussion and Replies