Book review and synopsis for The Push by Ashley Audrain, A tense domestic drama slash thriller about motherhood and a woman who is struggling under the pressure to be a "good mother".

In The Push, Blythe Connor is a woman who is trying desperately to be the perfect mother that everyone else seems to be, but she's struggling. Soon, she begins to wonder if there's something genuinely wrong with her daughter, Violet, though her husband insists it isn't true.

As the story unfolds in this gripping and suspenseful domestic drama, Audrain explores motherhood, the limits of unconditional love, and how the consequences of our actions can travel across generations.

The one-paragraph summary of this book: Blythe and Fox have a daughter, Violet. Blythe thinks Violet is violent and lacks empathy, but Fox thinks Blythe's insufficient love for Violet is the problem. When their infant son Sam is killed, Blythe blames Violet. Their marriage falls apart. Fox has a son, Jet, with his new wife, Gemma. Throughout the book, it's not clear if Violet is innately bad, if Blythe is a bad mother (Blythe comes from a line of bad mothers) or if it's all in Blythe's head. The book ends by implying that Gemma suspects Violet has now harmed Jet.

Blythe and Fox Connor are a couple who meet in college and get married at 25. Soon, they have their first child, a girl named Violet. Blythe struggles with Violet from the beginning, Blythe is exhausted, and motherhood proves far tougher than she anticipated. She senses Violet prefers Fox, but Fox insists it's all in her head. Soon, she starts to resents Fox for seeing her solely as Violet's caregiver, and Fox thinks Blythe is deficient as a mother. As Violet gets older, Violet continues to be antagonistic and even violent towards Blythe. Violet has trouble getting along with other kids and there's incidences of violence towards them, too. When a boy falls off a playset and dies, Blythe suspects Violet tripped him on purpose.

Meanwhile, the narration is interspersed with information about the women in Blythe's family and her childhood. Her grandmother Etta's first husband died in a horrified farming accident. Etta suffered from moods and needed sedatives to calm her down. When Cecilia (Blythe's mother) is born, Etta marries her second husband Henry, but Etta struggles with motherhood and is often intentionally cruel to Cecilia. Etta eventually hangs herself. Cecilia grows up and meets a man named Seb. She later cheats on him and wants to leave him, but then they find out she is pregnant. Seb insists they have the baby (Blythe). Cecilia dislikes being a mother, and she leaves permanently when Blythe is 12. Blythe's kind neighbor Mrs. Ellington instead acts as a maternal figure to her.

When Blythe and Fox have their second child, a boy named Sam, Blythe's connection with him is immediate, and she adores him. However, one day as Blythe crosses the street, Sam's stroller rolls into the intersection and he is killed. Blythe is convinced she saw Violet push the stroller.

As Blythe grieves, Blythe and Fox's marriage disintegrates, ending with Fox's infidelity. After Fox leaves, Blythe secretly uses a fake name to befriend Fox's girlfriend, Gemma, to learn about their life. Blythe learns they had another son, Jet. Blythe and Gemma become close, but eventually Fox finds out Blythe has been pretending to be someone else to get close to Gemma. Blythe still tells Gemma her suspicions about Violet anyway.

After the divorce, Fox has custody, but Blythe has visitation rights. Blythe and Violet's relationship is still fraught. Violet lies to make Blythe look bad, and she runs away while Blythe is watching her. Blythe continues to look for acknowledgement from others that there is something wrong with Violet, until she finally starts to doubt herself. Finally, at one point Blythe grabs Violet arm hard enough to hurt her, and Fox cuts off visitation. Blythe ends up watching their house to catch glimpses of her.

The book ends a year and a half after that point. Blythe has started therapy to try to move on. Then, in the final lines, she learns from Gemma that something has happened to Jet (with the implication that it was Violet's fault.)

I was really impressed by The Push by Ashley Audrain. It wasn’t a book I was expecting to like, much less one that I’d be eager to recommend to others. I actually only read it because one of my book clubs put it on the docket, and I wanted to be able to participate. I thought, I’m not really interested in this, but it’s relatively short so whatever.

The Push manages the difficult feat of being genuinely satisfying in terms of substance and telling a compelling (and multi-generational) story, all while maintaining a “thriller”-type atmosphere without feeling like genre fiction. I’m also surprised that this is Audrain’s debut novel, because the pacing, structure and voice of the book feel so confident and intentional.

As someone without children, motherhood is not something I spend a lot of time thinking about, and to be totally honest, I generally avoid books that are focused on things like that because they don’t tend to grab my attention. But The Push was consistently engrossing nonetheless and made me reconsider in some ways my own relationship with my mother, who I’ve not always had the smoothest relationship with (and who, in turn, had very difficult relationships with her own parents).

In addition to being a book about being a mother, Audrain’s novel also looks at the ways behaviors and the effects of those various behaviors get passed down through the generations.

In terms of the thriller aspects of it, be forewarned that The Push is not genre fiction, if that’s what you’re looking for. It has a thriller vibe in terms of a suspenseful and tense atmosphere, it’s relatively quickly paced, and there are even some shifts in perspective or new pieces of information introduced that feel something like twists, but to be clear, the book still doesn’t read like genre fiction if you read lots of thrillers. If you are expecting constant plot twists and a hundred miles per hour plot pacing, you might want to shift those expectations before getting into this book.

It’s not a perfect book, and there are things you could nitpick about it if you were inclined to do so. For example, Audrain overuses a narrative structure of having kids say a certain loaded thing or question and then the very next day, X major event happens. Like, not every comment from a child needs to have a 24-hour reaction time. But for the big things, I think Audrain does a good job with aspects of the book that really matter like the plotting of it or the substance in digging deep into the difficulties and uncertainties of motherhood.

The book is also a bit of a downer, and I would go so far as to say it occasionally toes the line into feeling like “misery lit” (or “misery p–n”, for a less proper term), wrapped up in a thriller-esque package. I don’t want to give any spoilers by going into detail on specifics, but suffice to say that there’s a lot of unfortunate events throughout the book. I definitely think there’s enough substance and more complex aspects of the novel that elevate it above what is typically considered “misery lit”, but sometimes as I was reading the vibe felt similar.

The Push is a domestic-slash-family thriller that can appeal to most adults, and it’s a book I imagine a lot of people can benefit from reading. If I’m being realistic, I imagine the readership will be largely women and especially women with children. But men with children would probably benefit a lot from reading this, and I have no kids but thought it was gripping and very worth my time.

The only demographic I probably wouldn’t recommend this to is adolescents, since I do think it probably takes a higher level of maturity to understand and appreciate a lot of the concerns or issues that this book deals with. Plus, some of the scenes and language are not kid-friendly.

Otherwise, I feel very comfortable giving this a strong recommendation. I read this in one day, and it felt very effortless. The Push is a really well-crafted novel, and it would be so perfect as a book club read.

See The Push on Amazon.

The audiobook for The Push is good. There wasn’t anything about it that stood out to me as being particularly good or particularly bad, but if you are interested in this book anyway, the audiobook presents a solid option. Hear a sample of The Push on Audiobook on Libro.fm.

See The Push on Amazon.

Read the first pages of The Push

See Everything We Know About the 'The Push' Adaptation 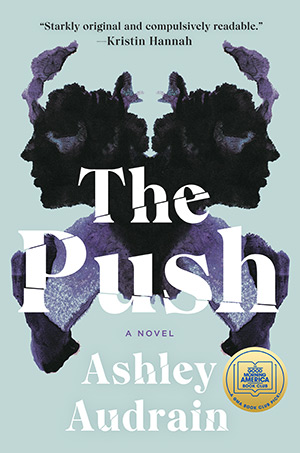 Blythe Connor is determined that she will be the warm, comforting mother to her new baby Violet that she herself never had. But in the thick of motherhood's exhausting early days, Blythe becomes convinced that something is wrong with her daughter—she doesn't behave like most children do.

Or is it all in Blythe's head? Her husband, Fox, says she's imagining things. The more Fox dismisses her fears, the more Blythe begins to question her own sanity, and the more we begin to question what Blythe is telling us about her life as well.

Then their son Sam is born—and with him, Blythe has the blissful connection she'd always imagined with her child. Even Violet seems to love her little brother. But when life as they know it is changed in an instant, the devastating fall-out forces Blythe to face the truth.

The Push is a tour de force you will read in a sitting, an utterly immersive novel that will challenge everything you think you know about motherhood, about what we owe our children, and what it feels like when women are not believed.