Book review and synopsis for The Night Watchman by Louise Erdrich, a Pulitzer-prize winning novel about opposing the 1953 Indian termination bill.

Based on events from the life of Erdrich's grandfather, The Night Watchman is about tribal chairman Thomas Wazhashk's efforts to fight against the push for Indian termination in 1953, which would have ignored prior U.S.-Native American treaties and resulted in the dispossession of Native American lands.

Erdrich also tells a story about a variety of other characters in and involved with the tribe. Wood Mountain is an aspiring boxer while Patrice is an young woman who wants to fulfill her family obligations but also has other ambitions.

The book opens in September 1952 and starts by introducing the main characters, all of whom live at the Turtle Mountain reservation.

Thomas Wazhashk is the night watchman at a manufacturing plant nearby as well as the tribal chairman for the Turtle Mountain people. Patrice "Pixie" Paranteau, 19, works at the plant as well and helps to support her family. She had been class valedictorian and is the first person in her family to have a "white-people" job. And Lloyd Barnes is a non-Native teacher at the high school, who also runs a boxing club for students. The star boxer in the area is a kid who graduated last year, Everett "Wood Mountain" Blue.

Thomas is concerned about a bill Congress is has passed -- spearheaded by Mormon Congressman Arthur V. Watkins -- referred to as the termination bill, which means the U.S. would undo previous treaties, would require the Turtle Mountain people to relocate and would remove current governmental services from them. Along with the rest of the tribal advisory committee, they begin to enact plans to fight the bill, including collecting signatures to petition the government and writing to their senator.

Meanwhile, Patrice's sister Vera has not been heard from since Vera got married and moved to Minneapolis. Concerned, Patrice goes to Minneapolis to track her down, but she's unable to find Vera. Instead, Patrice is coerced into working a job at a bar called Log Jam 26, serving as an entertainer who wears a costume and swans around in a tank. However, it turns out the costume is poisonous.

As Thomas studies the bill, he and the other tribespeople discuss how Native Americans had agreed to give up their lands in exchange for governmental services (which could be equated to "rent" paid in exchange for use of the rest of United States). Except, now the government no longer wants to pay. Instead, they want to kick them off most of their land. At the same time, Thomas also thinks about and sees the ghost of his friend Roderick, who died after getting sick locked in a basement cellar as a result of needlessly brutal punishment meted out by a schoolteacher at their government-run boarding school. Now, Thomas understands that those schools were more about erasing Native American culture than about education.

In Minneapolis, Wood Mountain eventually senses Patrice may be in trouble and helps to get her out of there. Before they leave town, Patrice and Wood Mountain track down Vera's baby, but not Vera. They take the baby home to be raised by the Paranteau family, with Wood Mountain coming by frequently to care for the baby. Barnes, who is enamored with Patrice, is jealous of Wood Mountain's connection with Patrice, and Barnes ends up fooling around with Patrice's friends Doris and Valentine.

To organize a delegation to testify about the bill, Thomas raises funds by planning a boxing match between Wood Mountain and his rival Joe Wobleszynski. He also reaches out to Millie Cloud, the daughter of one of the tribal members who is in grad school and recently conducted an economic survey of the reservation as part of her master's thesis. Thomas also tries to study the Book of Mormon to try to understand the mindset of Arthur V. Watkins.

Patrice and her mother Zhaanat both see Vera in their dreams and are certain she is alive. It turns out Vera was trafficked onto a ship (to be used for sex by the sailors) and became addicted to drugs at some point. When she goes through withdrawal, they leave her for for dead in an alleyway. Vera ends up wandering until a kind man, Henry, takes her in.

The delegation (consisting of Patrice, Thomas, Millie and two other tribespeople, Juggie and Moses) makes it to Washington. Thomas has a stroke on the way back, but recovers. In the end, Vera manages to make it home and the Turtle Mountain reservation is not terminated.

The Night Watchman by Louise Erdrich was recently awarded the 2021 Pulitzer Prize in Fiction, landing it firmly on my to-read list. It’s a story seeped in Erdrich’s own family history, based on her grandfather’s experiences resisting the dispossession of Native American lands from the U.S. government.

In addition to the response to the Termination Bill in 1953, the narrative in The Night Watchman shifts back and forth from a variety of characters, allowing Erdrich to cover other important topics involving the treatment of Native Americans and to tell stories about personal, interior dramas as well.

Through the character Patrice’s search for her sister Vera, Erdrich tells a story about the sex trafficking of Native woman which these communities are often at risk for. And through various characters such as Thomas’s sightings of his friend Roderick, Erdrich explores how government-run schools for Native Americans were more often about eradication of their culture and identity, rather than education.

Meanwhile, Patrice’s own story is about an ambitious and independently minded woman, who is weighted down by familial obligations, but is also loved and supported by her family.

Louise Erdrich has long been one of the, if not the, most important voice in telling stories about the Native American experience. There’s an embarrassing and shameful lack of these stories in books and television, so there’s no question that her work is important.

That said, a part of me feels like the Pulitzer awarded for this book was more about her body of work, rather than this book itself. Despite it’s numerous strengths, I occasionally had mixed feelings about this book.

There are aspects of it that are really compelling and moving, and obviously the cultural details woven into the story are fascinating. The Night Watchman is not one of those books that feels like a copy & paste of other books with some minor details changed. It tells a range of stories in a way that’s engaging for both literary and narrative reasons.

At the same time, the Night Watchman is told in a somewhat fragmented way, with the narrative jumping from scene to scene and the storytelling being a little scattered in general. It gets into a lot of side plots, and I found my attention drifting away from it from time to time. I definitely think this one is for more patient and diligent readers.

I didn’t really understand why Erdrich chose to focus on random things like Barnes’s love life or the two Mormon missionaries. It didn’t seem like to me that the story fully came together at the end.

Some of the characters also fell flat for me, especially the main character of Thomas. I understand Erdrich based him off of her grandfather, but he’s portrayed as such a saint that it made the character a little one-dimensional.

The Night Watchman deals with a variety of important topics that don’t receive nearly enough attention in books and media. For that reason alone, I imagine most people will get something out of reading this story. And while I didn’t like all aspects of it, The Night Watchman is still a competently told story that is a worth-while read, if you have the patience for it.

I’d also mention that The Night Watchman is not the most accessible book, so I wouldn’t recommend it to casual readers or anyone looking for a quick read. I think it would be a little too literary for your average book club, but if you guys are looking to tackle a more difficult read, there’s certainly plenty to talk about in this book (though I’ll warn that a lot of the discussion may end up being about clearing up confusion rather than discussing the themes and whatnot).

I’m glad I gave it a read, but to be honest, I didn’t end up feeling particularly enthusiastic about it. The book felt a little fragmented and unfocused in my opinion, though I did really appreciate the level of cultural details, which is where the story really shines. I’d love to hear what others thought!

See The Night Watchman on Amazon.

Hear a sample of The Night Watchman audiobook on Libro.fm.

I’m working on this section! It’ll be up soon I promise.

Read the first pages of The Night Watchman 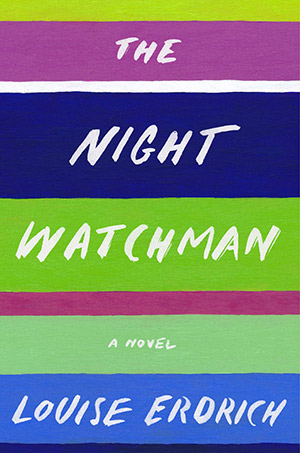 Thomas Wazhashk is the night watchman at the jewel bearing plant, the first factory located near the Turtle Mountain Reservation in rural North Dakota. He is also a Chippewa Council member who is trying to understand the consequences of a new “emancipation” bill on its way to the floor of the United States Congress. It is 1953 and he and the other council members know the bill isn’t about freedom; Congress is fed up with Indians. The bill is a “termination” that threatens the rights of Native Americans to their land and their very identity. How can the government abandon treaties made in good faith with Native Americans “for as long as the grasses shall grow, and the rivers run”?

Since graduating high school, Pixie Paranteau has insisted that everyone call her Patrice. Unlike most of the girls on the reservation, Patrice, the class valedictorian, has no desire to wear herself down with a husband and kids. She makes jewel bearings at the plant, a job that barely pays her enough to support her mother and brother. Patrice’s shameful alcoholic father returns home sporadically to terrorize his wife and children and bully her for money. But Patrice needs every penny to follow her beloved older sister, Vera, who moved to the big city of Minneapolis. Vera may have disappeared; she hasn’t been in touch in months, and is rumored to have had a baby. Determined to find Vera and her child, Patrice makes a fateful trip to Minnesota that introduces her to unexpected forms of exploitation and violence, and endangers her life.

Thomas and Patrice live in this impoverished reservation community along with young Chippewa boxer Wood Mountain and his mother Juggie Blue, her niece and Patrice’s best friend Valentine, and Stack Barnes, the white high school math teacher and boxing coach who is hopelessly in love with Patrice.

In the Night Watchman, Louise Erdrich creates a fictional world populated with memorable characters who are forced to grapple with the worst and best impulses of human nature. Illuminating the loves and lives, the desires and ambitions of these characters with compassion, wit, and intelligence, The Night Watchman is a majestic work of fiction from this revered cultural treasure.