Book review and synopsis for The Midnight Library by Matt Haig, an uplifting book for book lovers.

The Midnight Library is about Nora, a thirty-something woman who is regretful about her life and feels alienated and unneeded in this world. In the depths of her wallowing, she comes across the Midnight Library. In it, each book represents a portal into another variation of what her life could have been. As she reads the volumes, they allow her to access different versions of her life -- relationships she could have stuck with, careers she could have pursued and so on.

As she jumps in and out of these alternate realities, Nora's journey of self-discovery results in a life-affirming and reflective story about the choices we make, the paths we've chosen and each of our places in this world.

The one-paragraph version of this is: Nora Seed is unhappy in her life, tries to kill herself and finds herself at The Midnight Library, where she is able to try out different versions of her life. Through these alternate realities, she learns that the paths she'd regretted giving up weren't what she'd thought they would be. She eventually finds a life she's happy in, but in the process she learns that her original life had value. The Library dissolves as Nora decides to live. Nora returns to her original life, except now with less regrets and hope for the future.

The Midnight Library opens with a teenaged Nora Seed, who is smart and a talented swimmer. She is playing chess with the school librarian, Mrs. Elm, when she gets the news about her father's death. Nineteen years later, Nora is now a 35-year-old woman who is unhappy in her life.

A neighbor, Ash, informs her that her cat, Voltaire ("Volts"), has been hit by a car. Nora is upset and late for work, and she gets fired by her boss, Neil. She also runs to Ravi, who she was once in a band with along with her brother Joe. Both men blame her for dropping out right when they had a chance at a major record deal. After a string of other unfortunate events -- fired as a music tutor, reminded of having grown apart from her former best friend Izzy, etc. -- Nora decides to die, and she overdoses on pills at midnight.

Nora finds herself surrounded by mist, and she discovers The Midnight Library, where infinite rows of books represent portals into different variations of her life. Mrs. Elm (or something that resembles her) is here and serves as Nora's guide, explaining that the Library exists between life and death. Nora can stay in these alternate realities as long as she desires, but if she loses her will to live in the process then she will die forever.

Nora tries out a life with her ex, Dan, who she nearly married, only to discover that he would have gotten bored and cheated on her. She also tries a life where Volts was kept indoors to prevent it from being hit by a car, but learns the cat actually died of a health condition. Next, Nora is transported into a life where she moved to Australia with Izzy, but finds out Izzy would have died in a car accident. Nora then tries becoming an Olympic swimming, only to find out she is depressed in that life, too. When Nora tests out becoming an Artic researcher, she meets a man Hugo Lefèvre, who is also jumping between his alternate realities and has been doing so for a long time. But Nora longs to find a life to settle down in.

Nora tries a life where she stayed in her band and became a famous rock star, but she learns that becoming famous lead to Joe dying from substance abuse. From there, Mrs. Elm encourages Nora to pursue less "obvious" paths. Nora ends up trying out a multitude of lives and careers, ranging from becoming a single mom to running a winery or being an aid worker, but nothing sticks.

Finally, Nora recalls how Ash had once asked her out and tries a life where she'd accepted that date. Nora discovers a life that she thinks is quite nice, where they have a young daughter named Molly and a dog named Plato. In that life, Nora has patched up her relationship with Joe, and he is happily married. Nora thinks that this may be the best version of her life. However, when she goes back to her hometown she sees that her absence has had am impact. Nora sees that her neighbor, whom she used to help out, ended up having to move to a care facility. The music store she used to work at as a salesperson has closed down. And her music student, Leo, ended up falling in with a bad crowd instead of discovering his aptitude for piano.

With her regrets laid to rest and with hope for the future, Nora is able to turn her life around. She works on patching things up with her brother, starts soliciting more students for music lessons in order to make a living and starts volunteering weekly at a homeless shelter. Nora also seeks out the real Mrs. Elm at the care facility to resume their games of chess.

The Midnight Library by Matt Haig has been described as an uplifting book for book lovers, and it involves alternate realities so that automatically piqued my interest. I’ve been busy with some other projects and life stuff, plus struggling to get through some more “downer” type books, so I thought I’d switch to this one for a bit of a break.

I’ve actually never read anything by Matt Haig before, so I wasn’t entirely sure what to expect, but this book was a pleasant surprise. I also thought the audiobook narration, voiced by actress Carey Mulligan, was significantly better than your average narrator.

Reading The Midnight Library, it’s clear that author Matt Haig has spent considerable time thinking about The Big Questions in life, and this book is an extension or the result of that exploration. Haig has a specific message he wants to convey, and he does so through Nora Seed, the novel’s protagonist, a thirty-something woman who is dissatisfied with her life.

When Nora comes across the Midnight Library, it allows her to explore the different possible paths her life could have taken. The story is essentially about the “what ifs” in life, and it spends a lot of time considering things like what success is, how our actions affect others, or how our lives are shaped by the people around us.

While introspective, it’s also a lively book as Nora bounces from one possibility and life path to another. Though Nora is in a state of disillusionment about her life, Haig doesn’t spend much time wallowing in her unhappiness. Instead, he establishes her state of mind and then thankfully moves off of it.

As a whole, the book is hopeful and life-affirming, and it moves along briskly enough that I think most would find it a reasonably entertaining ride. 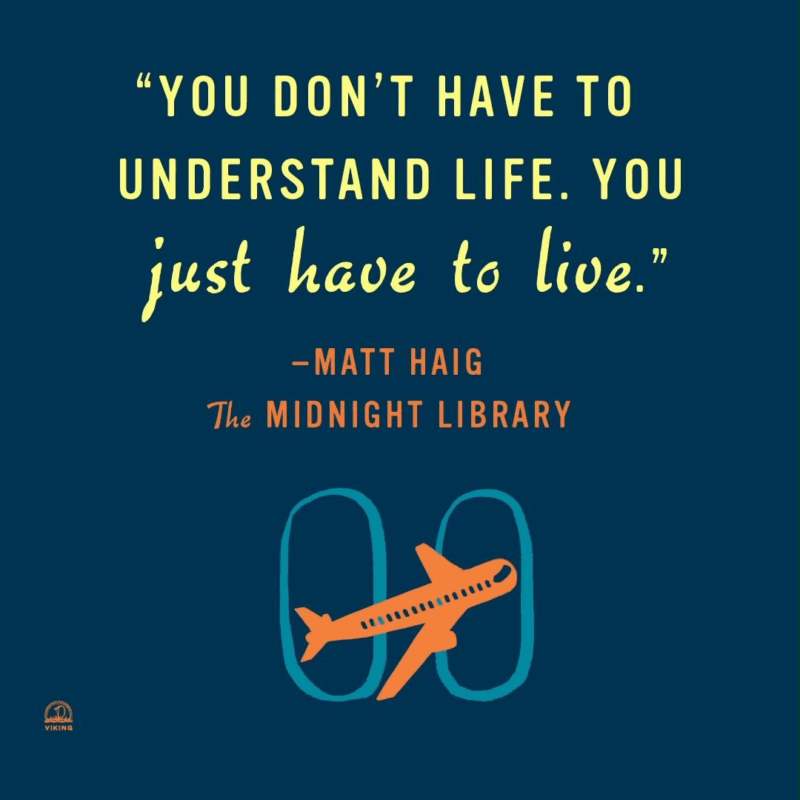 That said, if you’re looking for something that is really intellectually engaging, this is probably not going to scratch that itch. The message Haig seeks to impart in The Midnight Library isn’t novel, nor is it particularly earth-shattering. Chances are, you’ve heard variations of these types of messages before many times. And yet, reading it, I felt reassured and comforted. It’s the type of things we all know, but need reminders of sometime.

I sort of wish this book had a little bit of humor in it. I think it would have rounded out some of the rougher edges of the book and lifted up some of the more depressing parts as well. As I was reading this, I kept thinking about Anxious People, which I read not too long ago, and how that book did such a good job of being uplifting and sweet without becoming too cloying, mostly because of its use of humor.

Perhaps as a result of the tumultuous times we’re living in, there seems to be a certain appetite for books and movies that probe into the Big Questions in life right now. The Midnight Library is sort of a light foray into that territory. It’s an exploration of the lives one could have lived, the things that shape us and the possibilities that open up or close behind us.

Through The Midnight Library, Haig reflects on life decisions and the meaning of life, but he does so with a very light touch. It’s not a heavy or weighty book. I wouldn’t go into this expecting some sort of life-changing revelation. I liked the story, even if I didn’t really find it all that incisive or ground-breaking.

Instead, I think this would be perfect for someone who wants to read something about the “Big Questions” in life, but doesn’t want to read anything too dense or depressing. I also think this is worth reading if you really like the idea of alternate realities.

Overall, I enjoyed this book more that I initially thought I’d would, and I’m certain I’ll be revisiting Haig’s writing in the future. Also, if you’re looking for a life-affirming and fun book to read, I’d recommend taking a look at Anxious People, too, which was released a few months ago.

See The Midnight Library on Amazon. 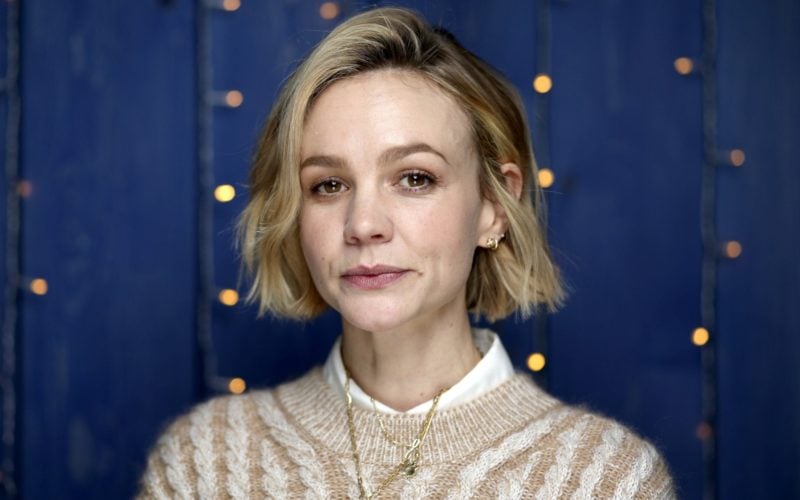 The audiobook for The Midnight Library is narrated by actress Carey Mulligan and is really quite good. As you might imagine, the acting is significantly better than the average audiobook, and Mulligan’s voice is pleasant to listen to. She voices a drunk guy with an American accent at one point which was spot on; typically, accents in audiobooks range from somewhat passable to cringeworthy, even in the best of them. So, this was a nice upgrade.

Point is, this is a fantastic choice for an audiobook if this title interests you. It runs a little less than 9 hours.

Check out a clip of it at Libro.fm.

Read the first pages of The Midnight Library

See Everything We Know About the 'The Midnight Library' Adaptation 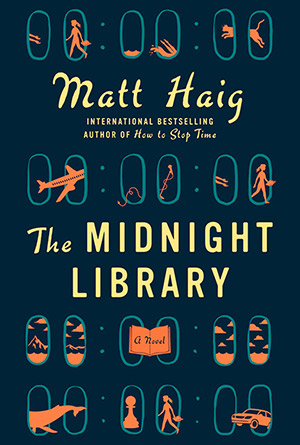 Somewhere out beyond the edge of the universe there is a library that contains an infinite number of books, each one the story of another reality. One tells the story of your life as it is, along with another book for the other life you could have lived if you had made a different choice at any point in your life. While we all wonder how our lives might have been, what if you had the chance to go to the library and see for yourself? Would any of these other lives truly be better?

In The Midnight Library, Matt Haig's enchanting new novel, Nora Seed finds herself faced with this decision. Faced with the possibility of changing her life for a new one, following a different career, undoing old breakups, realizing her dreams of becoming a glaciologist; she must search within herself as she travels through the Midnight Library to decide what is truly fulfilling in life, and what makes it worth living in the first place.