Book review and synopsis for Anxious People by Frederik Backman, a comedic but sincere novel about a failed bank robbery gone right.

Anxious People is about a failed bank robbery that turns an apartment viewing into a hostage situation and the subsequent investigation into it. The victims are argumentative and difficult, the bank robber is distraught and the realtor is incompetent. But when a gunshot goes off and the police find an apartment covered in blood, things get serious. It's a darkly comedic, yet also lighthearted story about a group of impossible people that are all stuck together, about empathy and battles we are all fighting, about people's struggles and hopes and dreams, and about a missing bank robber that the police can't seem to track down.

The one-sentence version of this is that Anxious People is about a group of people held hostage after a bank robbery who get to know each other, and they end up helping each other and helping the bank robber to find her way out of the mess.

The story, told achronologically, opens by explaining that, on the day before New Years Eve, there has been a failed bank robbery in a small town. The robber goes into a bank to demand a small amount of money, only to learn that it is a cashless bank. The robber flees into a nearby apartment building and into an apartment showing. The robber takes the people there hostage. It's soon surrounded by police. After a hours-long ordeal, the hostages are released. Afterwards, a gunshot goes off and the police storm the apartment to find it empty, but covered in blood.

Afterwards, the police question the eight hostages, all of whom are unhelpful and difficult. The hostages are: the realtor, a young couple (Julia and Ro), an elderly woman (Estelle), a businesswoman (Zara), an older couple (Roger and Anna-Lena) and finally a man (Lennart).

Zara is a bank manager. Ten years ago, a man jumped from a bridge nearby after losing all his money during the financial crisis. He had requested a loan, but was denied by Zara. He mails her a note before he jumps. A decade later, she still keeps it in her handbag, unopened. Jim and Jack are the local policemen investigating the robbery. Jim is Jack's father. As a teenager, Jack had seen the man on the bridge and tried unsuccessfully to convince him not to jump. A week later he sees another girl there, Nadia, about to jump. He pulled her back forcefully, and she grows up to become a psychiatrist.

Julia and Ro are looking for a home, since Julia is pregnant. The older couple, Roger and Anna-Lena, are retirees who renovate and sell apartments. Estelle, a widow, is there on behalf of her daughter. Lennart, an actor, ends up emerging from the bathroom, dressed in a ridiculous rabbit costume (Anna-Lena hires him to ruin viewings to bring down the price).

When the distraught robber comes in with a pistol, they don't take the robber very seriously. But they don't leave, either. The robber is recently divorced. It's revealed that her husband cheated on her with her boss, leaving her homeless, jobless and penniless. She sold her possessions and got a new job (but hasn't been paid yet). She needs just one month's rent to prevent being evicted from her new place. Her husband is also demanding sole custody of their kids. Feeling desperate, she decided to hold up the bank with a gun she finds.

Stuck in the apartment, the group of strangers get to know each other. Julia worries about being a good mother. Ro talks about falling in love with Julia. Estelle talks about missing her late husband. At first people think Roger is a jerk who bosses Anna-Lena around, but that's not the case. Anna-Lena used to have a high-powered job. Roger put his career on hold, so she could pursue her dreams. Now, she helps him with the apartment flipping even though she's tired of it, because she thinks it's his turn to do something that is meaningful to him.

The robber decides to just let all of them go, but they stay to help her figure out a way out of the mess. They're also waiting on a pizza they demanded from the police outside. When Jim comes up to deliver the pizzas, he learns what the robber's story is. He feels bad for her, and he suggests that she hide in the apartment next door, which is vacant. (He later lies and doesn't tell his son about seeing her.) Estelle reveals that this apartment belongs to her daughter. It used to be hers, and she once had an (emotional) affair with the neighbor next door. She still has a key to the apartment. She gives it to the bank robber, who uses it to hide out after the hostages leave.

Afterwards, Jack investigates, trying to learn how the bank robber could have disappeared. He finds out that the blood is fake (it was one of Lennart's props). He figures out that after the phone they sent up (to communicate with the robber) must've vibrated, causing the table to shake and the pistol to fall off, resulting in the errant gunshot. Meanwhile, Jim finally tells Jack the truth about what happened when he went to deliver the pizzas.

Jack and Jim decide not to pursue the case. In the end, no one was injured and nothing was stolen. Estelle ends up staying in that apartment. Estelle lets the robber stay with her. Julia and Ro buy the neighbor's apartment. Zara finally opens the note in the her purse, which simply says "it wasn't your fault", and she starts seeing Lennart. Jack and Nadia reunite. The book ends with the reminder of how people and strangers can impact each others' lives and how we're all just people who want the same basic things and are struggling with the same things.

Anxious People by Frederik Backman came out last week. I’ve been looking forward to it since I heard about it. I read A Man Called Ove, the novel that Backman is most well-known for, a while ago, and I was surprised that I liked it since “feel good” books are typically not my thing. I knew at some point I would want to read another book of his.

If you follow this blog, you may know that I’ve been on a spree of reading more upbeat and lighter novels, given all the dreary news that we’ve been inundated with all the time lately (and we woke up to orange skies in California a few days ago! Disconcerting, to say the least). This seemed like a perfect time to read his newest book. As I’d hoped, I found it to be precisely the sweet and funny reprieve that I’d been looking for.

Anxious People opens with the failed bank robbery. Then, there’s a discovery that a gunshot has gone off, with officers storming the area to find it covered it blood. When the book starts, it’s rather somber and a bit dreary. The characters seem just a bit difficult and seem not to like each other very much.

I, of little faith, started to wonder if I’d chosen the wrong book.

Then the somewhat zany quality to the story kicks in. Some of the interactions between characters get increasingly ridiculous, which gives way to full-blown comedy. Initially, I found the characters too absurd for my liking. But as the story gets underway, I got settled into the zany-ness of it all, and Backman starts hitting upon what he seems to want to say in this book. Ultimately, it’s a book about the ways we impact each other and how we are all fighting the same fight.

As he did in A Man Called Ove, Backman is great at finding just the right mix of humor and sincerity to take you through his story. The humor prevents the earnestness from feeling mawkish, while the sincerity gives the story its sense of purpose and meaning.

I was honestly surprised at how quickly my feelings about this book turned around. In the novel, Backman breaks the fourth wall and acknowledges that this is not a particularly realistic story. The zany tone and occasionally outrageous comedic bits reinforce that message. But the story is serious about the things matter, like the relationships between the people and about its reflection of people.

The structure of the novel also adds some suspense to the book. We know that the bank robber is missing, but what exactly happened will keep you guessing. The twists and turns on that front are cleverly incorporated into the story. I think the book would’ve been pretty good even without the mystery element, but the inclusion of that little bit of extra suspense adds a layer of complexity to the story that feels satisfying and fun as it slowly unravels.

This is a “feel good” book, so you probably have some idea of that’s the type of thing you like. But even if you don’t typically like those types of books, I think it’s worth trying to suspend your disbelief and cynicism to enjoy what this sweet and sometimes ridiculous story has to say. Every time Anxious People seemed like it was going to venture into that cloying, hokey territory, Backman throws in enough humor and wryness to lighten the mood without diminishing its meaning.

I tend to be a pretty harsh judge when it comes to more sentimental stories (and for a while in the beginning I was certain I wasn’t going to like this book), but once I settled into it, I found myself really enjoying it. Backman nails the mix of humor, earnestness and just a touch of mystery and suspense to make this narrative meaningful, engaging and delightful to read.

The result is an uplifting and entertaining story. I actually think I liked this book more than A Man Called Ove. It’s self-described in the book as not a particularly realistic story, but the important parts, like the sentiments and the message of the story, are real and sincere. And sometimes it’s nice to imagine what the world could be like and to spend a few hours in a kinder and sillier world. 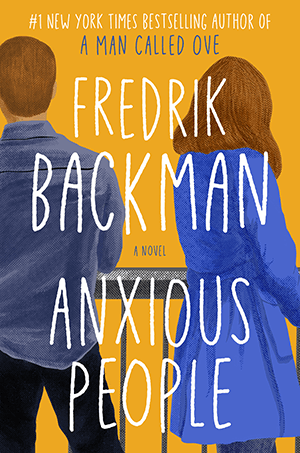 This is a poignant comedy about a crime that never took place, a would-be bank robber who disappears into thin air, and eight extremely anxious strangers who find they have more in common than they ever imagined.

Viewing an apartment normally doesn’t turn into a life-or-death situation, but this particular open house becomes just that when a failed bank robber bursts in and takes everyone in the apartment hostage. As the pressure mounts, the eight strangers slowly begin opening up to one another and reveal long-hidden truths.

As police surround the premises and television channels broadcast the hostage situation live, the tension mounts and even deeper secrets are slowly revealed. Before long, the robber must decide which is the more terrifying prospect: going out to face the police, or staying in the apartment with this group of impossible people.