By now, many many positive reviews of A Man Called Ove have been written, it’s been turned into a movie and is soon likely to be re-adapted by Tom Hanks, plus the author has gone on to write other well-received novels. In short, I knew it was a sure thing. I read it mostly because I was looking for a sure thing. And still, even knowing that, I was surprised how quickly it won me over (nineteen pages in, to be exact).

“Reverse radar and parking sensors and cameras and crap like that. A man who needs all that to reverse with a trailer shouldn’t be bloody doing it in the first place.”

The Lanky One nods cheerfully at him.

“Thanks for the help,’ he calls out, as if Ove hadn’t just spent the last ten minutes insulting him.

“You shouldn’t even be allowed to rewind a cassette,” grumbles Ove.

Frederik Backman’s novel, originally published in Swedish, is about a cantankerous and curmudgeonly old man, who is of course the titular man called Ove. He lives in a quaint neighborhood with quaint neighbors, almost all of whom he detests and generally deems to be unbearable for a myriad of reasons.

Ove is a man of few words but many principles, and he sees the world in black and white. He respects people who are useful, who can build things and fix things. He is unyielding, difficult, lonely, unhappy but essentially a good man.

The book is as much about Ove’s past as it is about the present, and it spends a lot of time reaching back into his past to draw a full and colorful character sketch of this man and how he became the principled old secluded grouch named Ove. When new neighbors moves in, good-natured but also determined to barge into his life, Ove is reluctantly dragged back into being a part of his community again.

I’ve come to realize that I strongly prefer books with a little bit of humor in them, which this one doles out in nice doses. I had put off reading A Man Called Ove for years despite the stellar reviews because, I figured it would be dreadfully earnest and perhaps a bit sappy. A grumpy old man who learns to get along with his neighbors? I know how this story goes. I’m sure it’s a lovely book, but maybe some other time, I thought over and over.

And it is earnest and that is precisely what this story is about, but it’s also funny and entertaining. Ove’s salty humor really is the book’s saving grace when it comes to it tonally feeling a little sappy, which it is at some parts. For some people, that will be a non-issue, they might even like it. I’m personally more adverse to sappiness, but the book’s comedic qualities help to balance it out.

In terms of the writing, it’s evenly paced and accessible. As for the plot, this is not a complex or even surprising story, and I’d actually venture to say it’s probably fairly unrealistic, too — but it’s not really meant to be any of that. Instead, it’s a hopeful, heartwarming and intimate slice of life that perhaps you may enjoy spending some time in. It’ll probably make you laugh, and cry and smile. You can almost imagine people reading this in front of a fireplace with a warm cup of tea, or maybe in front of a fire pit sitting outside wrapped up in wool blankets — whichever suits you best.

Ove has probably known all along what he has to do, but all people at root are time optimists. We always think there’s enough time to do things with other people. Time to say things to them. And then something happens and then we stand there holding on to words like “if”.

A Man Called Ove is essentially about goodness and principles and being part of a community in a cynical and often disappointing world. Given the current political climate, I found it comforting but also bittersweet since it evoked a kind of nostalgia for a certain type of world and served as a reminder of how ours is quickly spinning in the opposite direction.

It’s a sweet and earnest story, balanced out with some salty humor. If that sounds like your thing, I would be shocked if you didn’t like it. That said, if you are very adverse to sappiness in books, you may find it a bit cloying for your tastes, but I think there’s a chance the book’s charm might win you over anyway. I personally found the book to be a nice salve in a week of awful political news.

I’m not overly eager to pick something else up by Backman right away after reading it, but feel confident that when the right mood strikes, I’ll want to revisit this comforting and homey world. 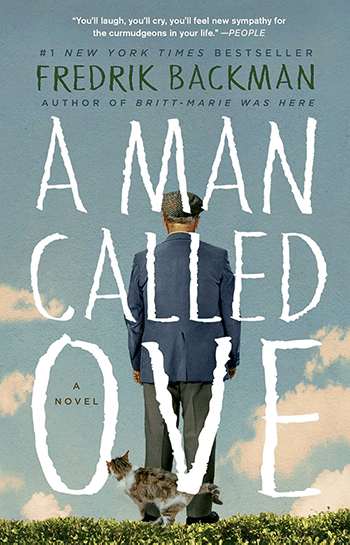 From the Publisher
Meet Ove. He’s a curmudgeon—the kind of man who points at people he dislikes as if they were burglars caught outside his bedroom window. He has staunch principles, strict routines, and a short fuse. People call him “the bitter neighbor from hell.” But must Ove be bitter just because he doesn’t walk around with a smile plastered to his face all the time? Behind the cranky exterior there is a story and a sadness. So when one November morning a chatty young couple with two chatty young daughters move in next door and accidentally flatten Ove’s mailbox, it is the lead-in to a comical and heartwarming tale of unkempt cats, unexpected friendship, and the ancient art of backing up a U-Haul. All of which will change one cranky old man and a local residents’ association to their very foundations. A feel-good story in the spirit of The Unlikely Pilgrimage of Harold Fry and Major Pettigrew’s Last Stand, Fredrik Backman’s novel about the angry old man next door is a thoughtful exploration of the profound impact one life has on countless others. “If there was an award for ‘Most Charming Book of the Year,’ this first novel by a Swedish blogger-turned-overnight-sensation would win hands down” (Booklist, starred review).
Show More
See it on Amazon
Share This
social & email
New Reviews
recent releases
New Posts
recently posted
Discussion and Replies