Main / Books / The Last Thing He Told Me

The Last Thing He Told Me
(Review, Summary & Spoilers)

Book review and synopsis for The Last Thing He Told Me by Laura Dave, A page-turner about a woman whose husband has disappeared while being investigated for white-collar crime.

In The Last Thing He Told Me by Laura Dave, Hannah Michaels finds out that her husband Owen is being investigated for a crime and has now gone missing. She's left alone with her 16-year-old stepdaughter, Bailey, who dislikes her.

Together the two must work together to figure out the truth behind Owen's disappearance, leading down a path that reveals old family secrets and tests Hannah and Bailey's relationship.

The one-paragraph version: Hannah finds out one day that her husband Owen has run away after the company he works for has been indicted for various white collar crimes, leaving her alone with her teenage stepdaughter Bailey who dislikes her. As Hannah and Bailey investigate, they learn that Owen had a previous life he was running from (and he was worried the new scandal will result in his current identity being compromised), where Owen's father-in-law Nicholas had been a lawyer for a crime syndicate and where he and Bailey had different names and lived in Austin. By the end, Hannah brokers a deal with Nicholas for her and Bailey to be safe from the syndicate, even if it means Owen can't be in their lives. It's what Owen would have wanted, and it brings Hannah and Bailey closer.

Part I opens with Hannah learning that Owen, her husband, has left on the same day that the company he works for, The Shop, is being raided as part of an FBI and SEC investigation into fraud and embezzlement charges. The CEO, Avett, has been arrested, and other high-level employees such as Owen are expected to be indicted as well. Bailey, Owen's 16-year-old daughter and Hannah's stepdaughter, also finds a duffle bag filled with cash that Owen left in her school locker.

In a series of flashbacks, we learn that Hannah and Owen met around two years ago through Avett who was a client of her interior design and woodturning business. She moved to the Bay Area to be with him and has tried unsuccessfully to form a relationship with Bailey.

As Hannah tries to learn what has happened, Hannah contacts her ex fiancé Jake to serve as her attorney. Soon, Grady Bradford, a U.S. Marshall shows up at her door looking for Owen. Later, two FBI agents show up as well. However, Grady seems to be working separately from the FBI, and Hannah finds it odd that Grady is based out of the U.S. Marshall's office in Austin, Texas. And as Hannah recalls her conversations with Owen, it becomes clear that he seemed to have some connection to the city of Austin and Bailey vaguely recalls being there once when she was very young.

In Part II, Hannah and Bailey head to Austin to try to understand Owen's connection to the city. Bailey remembers attending a wedding in Austin, and they remember the name of a Professor Tobias Cookman that Owen used to talk about, who turns out to be a UT Austin mathematics professor. Tobias's help leads them to a yearbook where they find a photo of the woman Bailey remembers as her mother, Olivia, except her name is listed as Katherine Smith.

They end up at Katherine Smith's family bar, The Never Dry, where they meet her brother Charlie Smith. Research reveals that Katherine was married to an Ethan Young, which is Owen's real name. Katherine was killed in a hit and run crossing the street when Bailey (real name is Kristin) was a toddler. Owen blamed the incident on his father-in-law Nicholas Bell who was the lawyer for a major crime syndicate, because Owen believed Katherine was killed in retribution for Nicholas losing an important case. Owen/Ethan then provided evidence to put Nicholas and many syndicate members behind bars, and then he took Bailey/Kristin and disappeared. (When news broke of The Shop scandal, Owen went on the run again because he feared his new identity would be compromised.)

After learning all of this, Hannah realizes she needs to get Bailey out of there, but before she has a chance to tell Bailey all of this, she sees that Bailey has run off by herself.

In Part III, Grady shows up again and admits that he was the one who helped Owen disappear a decade before. Owen was supposed to enter WITSEC, but a leak of his new identity made him distrust the program so he didn't. Grady aslo sends people looking for Bailey, and they are able to locate her. Grady tries to pressure Hannah into entering WITSEC with Bailey, but she refuses knowing that Owen didn't trust it.

Instead, Hannah goes to Charlie and asks him to arrange a meeting with Nicholas. She brokers a deal with him to keep her and Bailey safe in exchange for him being able to have a relationship with Bailey. However, Owen can't be part of the deal. Hannah hopes he will someday relent on that point, but for now she accepts. She knows that Owen would want what's best for Bailey, and Bailey would not want to live her life in hiding.

The book concludes by jumping forward many years to Hannah getting ready for an exhibition of her work. Then, Owen (who is still in hiding) briefly walks in to discreetly say hello before he leaves. Afterwards, Bailey comes in with her new boyfriend and refers to Hannah as "mom".

The Last Thing He Told Me by Laura Dave is Reese Witherspoon’s latest book club pick. Reese’s Book Club picks tend to be faster paced, breezier reads, which I was in the mood for, so I thought I’d give this a read, and I’m happy to report that this book didn’t disappoint.

The Last Thing He Told Me is an up-tempo page-turner that’s an easy quick read with some elements of a family drama dealing with self-sacrifice and the relationship between a stepmother, Hannah, and her stepdaughter, Bailey. I feel like stepmothers in books are often not at the forefront or are bad (à la the evil stepmother trope), so it was nice to see a positive stepmother-stepdaughter relationship for a change.

In The Last Thing He Told Me, Hannah’s husband Owen (Bailey’s father) goes missing, and the investigation into his disappearance leads into a web of unanswered questions and reveals secrets about his past.

The book is described as a mystery, but I think it’s more of a thriller, since it’s not really planting clues for you to figure out. Instead, you’re following along as the suspense in the novel plays out.

That said, the thriller aspects of The Last Thing He Told Me are really well done. It’s paced perfectly, offering up just enough suspense and information at the right times to for really satisfying build ups of tension and resolution. It never drags, since you’re continually finding out new things and having other questions build up.

Because of this, this was a very speedy and engaging read for me. The book is plotted carefully, without glaring plot holes or dangling narrative threads. Instead, everything in this thriller fits together neatly, with just enough complications to keep you on your toes.

Overall, I liked the snappy page-turner-y feel of the book, and as mentioned above, I think the thriller aspects of it are very well done.

However, the family drama parts of it are what fell a little short for me. The protagonist is essentially a perfect, self-sacrificing stepmother and while perfect characters are easy to root for, it also means there’s no room for the character to grow.

Also, perfect people in my opinion make uninteresting family dramas since a lot of the difficulty in those situations come from the fact that people aren’t ever entirely perfect in real life. Figuring out how to navigate people’s imperfections is what substantive family dramas are about.

In essence, there’s a bit of a Hallmark quality to the family drama in this book. It’s definitely a component of the book, but I had mixed feelings about whether I really got anything out of it. I guess you could see it as a story about parental sacrifice, but it just felt flat to me. I’m actually really curious if others felt the same way, so if you have thoughts on how this relationship was handled, I’d love to hear from you in the comments!

The good news is, if you’re not really in it for the family drama anyway, it didn’t detract from the rest of the book for me, so you could easily enjoy this book either way.

If you’re looking for a quick and snappy thriller, The Last Thing He Told Me is an easy read that will fly by. The thriller components are well-constructed and intriguing enough to keep you drawn into the story.

The family drama aspects of it felt a little overly neat and generic to me, but I imagine some will feel differently. It does deal with a positive stepmother-stepdaughter relationship, which is something I don’t see very often in books, so that was a plus.

Overall, I think most people will like it, and I was very pleased with the tidy and satisfying plotting of the story. I’m not sure there’s quite enough substance there for this to be a great book club pick. Instead, I’d recommend this as a solo read if you’re looking for something engaging to try to kill some time.

Have you read this or are you planning on reading this, what did you think? Let me know your thoughts below! See The Last Thing He Told Me on Amazon.

The Last Thing He Told Me Audiobook Review

I think this book is a solid option for audiobook listening. The narration is very listen-able and the voice actress is a good fit for the narrator of our story.

It’s also a story that well-suiting for audiobook-ing in general, since it’s easy to follow.

Hear a sample of The Last Thing He Told Me audiobook on Libro.fm.

Read the first pages of The Last Thing He Told Me 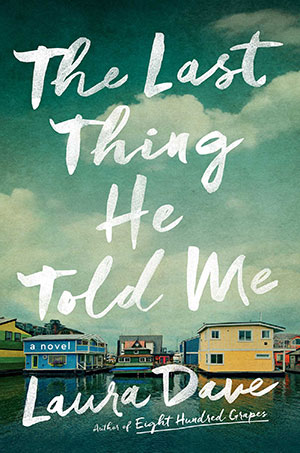 Before Owen Michaels disappears, he smuggles a note to his beloved wife of one year: Protect her. Despite her confusion and fear, Hannah Hall knows exactly to whom the note refers—Owen’s sixteen-year-old daughter, Bailey. Bailey, who lost her mother tragically as a child. Bailey, who wants absolutely nothing to do with her new stepmother.

As Hannah’s increasingly desperate calls to Owen go unanswered, as the FBI arrests Owen’s boss, as a US marshal and federal agents arrive at her Sausalito home unannounced, Hannah quickly realizes her husband isn’t who he said he was. And that Bailey just may hold the key to figuring out Owen’s true identity—and why he really disappeared.

Hannah and Bailey set out to discover the truth. But as they start putting together the pieces of Owen’s past, they soon realize they’re also building a new future—one neither of them could have anticipated.