The Invisible Life of Addie LaRue

By V.E. Schwab, A whimsical fantasy-romance about a young woman who makes a deal with the devil

I’ve been wanting to read something from VE. Schwab for a while, and The Invisible Life of Addie LaRue is the first book in her new series. If you’re not familiar, V.E. Schwab is known for her fantasy novels, such as A Darker Shade of Magic.

I had some mixed feelings about this book, but there’s a lot to like as well. I imagine her fans will be pleased with it.

See the Plot Synopsis & Summary for The Invisible Life of Addie LaRue (spoilers). (The first two sections of this summary are available now. The rest will be posted after the book’s publication in October 2020.) For the spoiler-free version:

In The Invisible Life of Addie LaRue, Addie LaRue is a young woman who trades her soul for immortality and a life of freedom. She will can live forever, but no one can remember her. It’s a bargain she strikes with the devil out of desperation and a desire for more.

Three hundred years later, Addie has learned to survive, but is still living a mostly invisible existence. Then, she walks into a small New York City bookstore, and meets a man who can remember her name and face.

I had some mixed feelings about this book. There are parts of this book that are inventive, delightful and intriguing. V.E. Schwab has delivered a novel that sweeps you into its world and carries you off with her imagination and imagery. However, it’s stalls out for a while on account of too much repetition and some other issues.

The book’s premise is whimsical and likely to inspire curiosity in most fantasy lovers. Addie LaRue makes a deal with the devil, and now she lives an invisible life. She can’t be remembered by anyone after she leaves their presence, can’t own possessions, can’t make new things or even leave marks on the world. However, she can steal to survive and inspire others to do things. (The logistics of how these rules function are a little fuzzy, but Schwab more or less makes it work.) Addie has lived for 300+ years, but all she really wants is to be remembered.

It’s a strong start out of the gate, as Schwab uses vivid imagery and precise metaphors to tell her fantastical tale. However, just as you’re ready for the plot to take off, it feels like the book is just stalling for a long stretch. A large bulk of the plot is packed into the first fifty pages and the last hundred pages. And while it’s a really interesting plot, there’s a lot of filler in the middle.

By the halfway mark, the plot still hasn’t progressed past the point described on the book cover. The first few chapters start with her sleeping with a man who doesn’t remember her the next day, which was good, but then it continues to describes in detail her meeting someone else and then then another, all of whom don’t remember her, and I started getting impatient.

Similarly, the first time Addie learns how to make her mark on the world was compelling and intriguing. But the tenth time Schwab makes this point, I was significantly less interested in it. In general, there’s many plot points that get made and then regurgitated in different but similar forms.

The character of Addie LaRue also borders on being a bit juvenile. According to the book, she has lived for over 300 years, but her personality doesn’t reflect it. There was just a weightlessness to her where I wish she would have had a fuller personality, with more specific interests or desires.

It seems strangely childish to me that such an old soul spends all her time yearning for familiar embraces with handsome men instead of things like family, children, societal progress or an occupation. She seems to have made peace with giving up all the rest of it, but for some reason can’t stop pining after men. She doesn’t seem like an adult, much less someone with the wisdom of 300+ years.

That all said, I think on the balance, fans of V.E. Schwab will likely be able to see past these things and enjoy this story for what it is — a tale that is whimsical, romantic and intriguing. Even with some less-than-exciting parts in the middle, the plot is constructed in a way that will make most people curious for what comes next.

I would say the repetitiveness and the lack of wisdom coming from a 300+ year-old-character are probably the two main things that I didn’t love about The Invisible Life of Addie LaRue. The rest of this stuff is a mix of more minor things that left me feeling a bit disenchanted, but in all likelihood will not bother most people.

I found the emphasis on the characters visiting exclusive clubs, accessible only from secret elevators and tunnels, to be pretty immature and childish. In the book, it’s presented as a way for people to experience new things, but honestly that is just the most banal and superficial version of a “new experience”. It’s something that seems cool in your twenties, but you would imagine that immortal creatures would have expanded their horizons beyond these types of trivial, prosaic things at some point.

Addie LaRue also presents a disappointingly Euro-centric view of the world. Luc (the devil, it’s short for Lucifer) is able to whisk them off to anywhere with a flick of his wrist, but he only chooses locations in Europe and the U.S. He introduces her to new music, art and culture — but only as long as they are created by white people, apparently. Addie trades her soul for adventure and freedom, traveling across Europe and the U.S., but is strangely incurious about the rest of the world.

And I know this isn’t supposed to be historical fiction, but at one point Addie encounters a former lover, who is now 51 years old. Which would be fine, except the average life expectancy in France in the mid 1700s was around 25 years (and actually lower for men), so it seems unlikely he would have been alive and certainly not trotting around at fancy parties.

As a final note, I chafed every time that Addie is referred to as a “girl” throughout the entire book (which is every time). A 23-year-old (or someone who is 323, but looks 23) is a woman. I wish writers would stop over-romanticizing the idea of women as “girls.”

There’s a lot to like about this book, but there were easily a hundred or more pages that could’ve been cut and the story would be basically the same. The repetitiveness of it really dulled my enthusiasm for it early on, but in the last hundred pages, the story gathers a lot of steam and gets good. Of course, the book ends at that point, so you’d have to read the sequel to find out what happens next.

A part of me is curious to find out what happens next. But I’m also a little resentful that I read through 400+ pages only to find out it ends when the book hits its stride. It’s not a cliffhanger, but it feels a lot like one. I’d say I’m a “maybe” for whether or not I’ll read the followup.

I also think this book will be more appropriate for adult readers who like YA books (but note that there are some sex scenes). To be clear, I don’t think the book is firmly YA, but the main character leans that way. The protagonist is 300 years old, but still acts fairly immature and for some reason still thinks exclusive clubs are like, really cool and the pinnacle of new experiences. I’m guessing people who enjoy YA will be able to look past these things more easily.

If you loved this book (and I know many people will adore it), I know you might disagree with some of this. I’m always open to contrary opinions from anyone with constructive thoughts! Feel free to share below.

See The Invisible Life of Addie LaRue on Amazon.

Show/Hide Detailed Summary (Spoilers)
Note: This is just the first two sections of this summary. The rest of the summary will be available after the book has been published in October 2020.

The book switches between the past and the present to tell this story. In Part One, we meet Adeline "Addie" LaRue, who was born over 300 years ago, in Villon, a small french village. A local woman, Estele, taught her about the old gods, but warned her not to call on them after dark. Estele also told her she had seven freckles, one for each man she would love some day. In 1714, Addie is 23 and engaged, but she longs to be free. As she prays to the old gods, the night falls and the devil answers. Addie asks to live freely and to have more time. As a gift, she offers her favorite possession, a carved wooden ring, but the devil rejects it. Instead, she offers the devil her soul when she is done with it, and he accepts. She is given eternal life, but no one can remember her (she wanted to "live freely"). As soon as she leaves their sight, they forget her. In present day, Addie survives by stealing and sneaking into others' apartments to sleep. She can't give people her real name or tell her story. She also cannot keep a home or keep possessions. The exception is her wooden ring, which she cannot get rid of. She walks into a used bookstore to steal a book, but is caught by the clerk, Henry. But he lets her take it anyway. In Part Two, the devil appears yearly, each time asking Addie if she's ready to relinquish her life and her soul. Each time, she declines. He takes on the form and name, Luc, of an imaginary stranger Addie once daydreamed about. Addie learns to survive and navigate her new world. In present day, Addie sees Henry again, who recognizes her, and they go on a date. To be continued... Note: This is just the first two sections of this summary. The rest of the summary will be available after the book has been published in October 2020.

See The Invisible Life of Addie LaRue on Amazon. 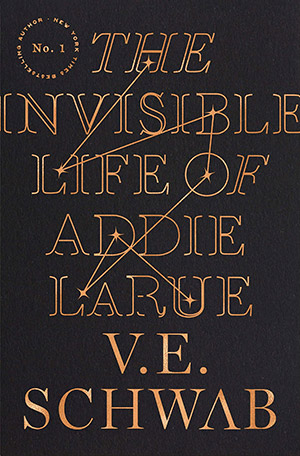 From the Publisher
France, 1714: in a moment of desperation, a young woman makes a Faustian bargain to live forever―and is cursed to be forgotten by everyone she meets. Thus begins the extraordinary life of Addie LaRue, and a dazzling adventure that will play out across centuries and continents, across history and art, as a young woman learns how far she will go to leave her mark on the world. But everything changes when, after nearly 300 years, Addie stumbles across a young man in a hidden bookstore and he remembers her name.
See it on Amazon
Top Books
this month
Top Posts
this month
read more
Latest from the blog
Best Historical Fiction of 2020 (So Far)