Main / Books / The House in the Cerulean Sea

The House in the Cerulean Sea

Book review and synopsis for The House in the Cerulean Sea by T.J. Klune, a warm-hearted story about kids in an orphanage for magical creatures.

In The House in the Cerulean Sea, Linus Baker is a lonely case worker for a governmental organization which manages orphaned kids who are magical beings.

One day, he's given a secret assignment to assess a special orphanage on the island of Marsyas, run by a man named Arthur Parnassus, who has secrets of his own. Among the six unique children living there, one of them is Lucy, short for Lucifer, who just happens to be the Antichrist.

Despite his initial reservations, as Linus's days pass in Marsyas, in this idyllic setting among a coterie of magical children, Linus finds himself coming across a little romance, an unlikely family and possibly even a home.

Linus Baker is a lonely case worker for the Department in Charge of Magical Youth ("DICOMY"), a governmental organization which manages orphaned magical beings who are minors. His job consists of visiting orphanages to check up on them and then writing up a report. One day, he's called in by the organization's Extremely Upper Management ("EUM") to serve on a month-long classified assignment, reporting directly to one of the four members of EUM, Mr. Charles Werner.

Linus's assignment is to assess a special orphanage on the island of Marsyas. The master of the orphanage is a man named Arthur Parnassus. There are six children living in the orphanage there, one of whom is called "Lucy" (short for Lucifer), who is the Antichrist.

All the children at Marsyas are unique. Theodore is one of the few wveryns in existence. Talia is a female gnome, a rarity. Phee is a particularly powerful forest sprite. Chauncey is an amorphous blog with tentacles, basically a monster. And Sal is a shapeshifter who can become a small Pomeranian, with the special ability of being able to give others shapeshifting abilities by biting them. He has been in many orphanages and was abused previously.

The children view Arthur as a father figure. There's also Zoe Chapelwhite, an undocumented, adult island sprite who has lived on the island since before the orphanage. She helps to take care of the children in an unofficial capacity. Linus is scared of the children at first, but soon sees that they act much like other kids. Arthur tells Linus that people see the kids as being threats, but actually the kids can be anything they choose to be. Meanwhile, the kids are scared that Linus will take away their home, since he will be making a recommendation whether to shut down the orphanage or not.

In previous assignments, Linus had prided himself on being detached and viewing the children's fates as outside the scope of his responsibility, but on Marsyas, Linus finds his objectivity slipping away. He also starts to develop romantic feelings toward Arthur, which are reciprocated. As Linus sends back reports to Extremely Upper Management, they are dismayed when they see how sympathetic Linus has become towards Arthur and the orphanage. Mr. Werner reveals to Linus that Arthur is actually a very rare magical being as well, a Phoenix. He gives Linus a key to a burned-out cellar on the island to show Linus how potentially dangerous Arthur can be.

When Linus goes to investigate, Arthur tells Linus that he grew up in a DICOMY orphanage and was abused. When he tried to ask the DICOMY for help, the master of the orphanage intercepted the letter and locked Arthur in the cellar. Arthur burned out cellar trying unsuccessfully to get out. He was eventually released when the DICOMY came to investigate months later. As an adult, Arthur requested to be put in charge of the orphanage because he wanted to turn it into a place where kids could truly get help. The required that he not tell anyone about being a Phoenix.

The people in the village of Marsyas fear the kids, but Linus encourages Arthur to take the kids into the village for the first time. Helen, the town mayor, is sympathetic to them and encourages the villagers to look past their prejudices.

When Linus's time on the island concludes, Arthur asks Linus to stay with him and the kids, but Linus declines. He goes back to the office and makes a recommendation to allow the orphanage to stay open. He also accuses the DICOMY of running discriminatory orphanages by segregating out the magical beings.

As soon as Linus's recommendation to keep the orphanage open is accepted, he know it's where he wants to be. He immediately quits his job and heads back. When they reunite, Arthur and Linus finally kiss. Later, Linus submits an anonymous whistleblower report about the DICOMY's discriminatory practices which results in the EUM all stepping down and being replaced. He also tells his story to a reporter who plans to publish an expose. Soon, Helen brings David, an undocumented yeti boy who needs a home, to the island. Arthur and Linus intend to formally adopt all the children, including David. The book closes with Arthur and Linus about to be married.

The House in the Cerulean Sea by T.J. Klune was released last year and mostly passed me by. I recall thinking it had a great title and really lovely cover (see notes about the making of that cover here), but it wasn’t until I started seeing positive reviews of it from people I know that it really popped on my radar.

This is an unabashedly optimistic and well-meaning story. It’ll warm your heart and perhaps even bring tears to your eyes. If you’re in the mood for an all-good-vibes-type of narrative mixed in with creatures of lore, then this is a good book to consider. It’s a happy, uncomplicated story about inclusivity and discarding prejudices, and it’s a quick and easy read.

The writing was fine, and the narration is occasionally funny. There is a very sweet (queer) romance component to this novel, which I thought was cute. Also, if you are a cat-lover, I’m pleased to let you know that Calliope the cat makes for a pleasingly feisty side-character in this book.

I think The House in the Cerulean Sea could probably have been categorized as a Young Adult novel. Even though the main character is an adult, many of the main storylines in the book involve the personal growth and development of a group of young children that reside in the titular “house in the cerulean sea”. There’s definitely some similarities to Miss Peregrine’s Home for Peculiar Children, if you were a fan of that book. Of course, the main character arc is reserved for Linus (an adult), so I get why they didn’t mark it as a YA novel.

While I liked this book, I didn’t love it. It’s a bit of a simplistic story. At times I found it a little too black-and-white for my tastes, with saintly “good” characters, villainous “bad” characters and pretty much no one in-between. While sweet and upbeat, The House in the Cerulean Sea was lacking in dramatic tension for me, since it was always quite clear how the story would play out.

I also wish it made more use of its fantastical creatures. There’s a wide range of mythical, magical beings, but we don’t really see them showcasing the full spectrum of their abilities. It’s understandable, since that’s not what the book is really about, but I’m just someone who likes that kind of stuff.

The House in the Cerulean Sea is an uncomplicated feel-good book that is full of fantastical creatures and tells a well-meaning, upbeat story about acceptance and inclusivity. It’s the type of book that reminds you of being outside on a sunny day with a cool breeze blowing through.

This is a fairly simple and “neat” story, probably more suited to people who enjoy YA novels, but I think as long as you’re aware of that going into it, you can enjoy its sweet and uncomplicated tale. I liked it for the most part, but I didn’t love it. I think I’m just someone who tends to prefer more layered novels in general, so this wasn’t entirely to my tastes.

That said, if you like the idea of a breezy, feel-good novel with some romance mixed in, for the right reader this would be a great read.

See The House in the Cerulean Sea on Amazon.

The House in the Cerulean Sea Audiobook Review

Hear a sample of The House in the Cerulean Sea audiobook on Libro.fm.

Read the first pages of The House in the Cerulean Sea 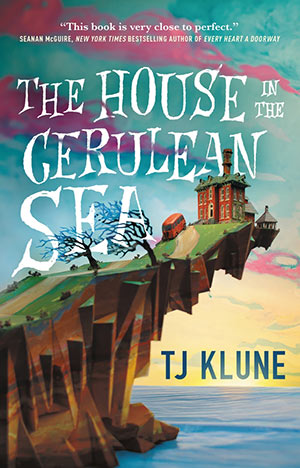 Linus Baker leads a quiet, solitary life. At forty, he lives in a tiny house with a devious cat and his old records. As a Case Worker at the Department in Charge Of Magical Youth, he spends his days overseeing the well-being of children in government-sanctioned orphanages.

When Linus is unexpectedly summoned by Extremely Upper Management he's given a curious and highly classified assignment: travel to Marsyas Island Orphanage, where six dangerous children reside: a gnome, a sprite, a wyvern, an unidentifiable green blob, a were-Pomeranian, and the Antichrist. Linus must set aside his fears and determine whether or not they’re likely to bring about the end of days.

But the children aren’t the only secret the island keeps. Their caretaker is the charming and enigmatic Arthur Parnassus, who will do anything to keep his wards safe. As Arthur and Linus grow closer, long-held secrets are exposed, and Linus must make a choice: destroy a home or watch the world burn.

An enchanting story, masterfully told, The House in the Cerulean Sea is about the profound experience of discovering an unlikely family in an unexpected place―and realizing that family is yours.