Book review and synopsis for The Good Sister by Sally Hepworth, a mystery-thriller told from the perspective of two twin sisters who were raised by a sociopathic mother.

In The Good Sister, Rose and Fern are twin sisters. Fern works at a library and uses routine to keep her life in order. Meanwhile, Rose is an interior designer who has been trying unsuccessfully to get pregnant.

When Fern comes up with an idea to try to help Rose, it leads down a path that will disrupt both their lives and unearth old secrets.

The one-paragraph version: Rose and Fern, 28, are twin sisters who had a bad childhood with a cruel mother. They are very close because Fern is autistic and very reliant on Rose. When Rose is unable to conceive, Fern offers to step in as a surrogate, meets a man named Wally and gets pregnant. Just before the baby arrives, their brain-damaged mother dies. It's then revealed that Rose, due to her narcissism and jealousy, has been manipulating Fern all along into believing that she's incapable of taking care of herself and a danger to others. Rose lied about their mother being cruel, caused her brain damage and killed her. (When they were kids, Rose also murdered a boy who liked Fern and made Fern think it was her fault.) By the end, Fern is happily raising the baby with Wally. But as the book closes, Rose is trying to come up with a new set of lies to incriminate Fern.

Rose and Fern are twin sisters who had a difficult childhood with a cruel mother. Rose helps to take care of Fern, who is on the autism spectrum and has trouble remembering things. There were incidents where Fern has hurt people in the past, including one in particular where Fern held a boy named Billy underwater until he died.

Similarly, when Rose goes to visit her husband Owen (who is in London on business), she asks Fern to watch her dog. But Fern forgets and the dog nearly dies.

Meanwhile, Rose has been having trouble conceiving, and Fern offers to step in as a surrogate. At the library she works at, Fern meets a man named Wally for that purpose, but then Fern and Wally genuinely fall for each other. Wally turns out to be a multi-millionaire computer programmer. Soon, Fern is pregnant. Fern is temped to raise the baby herself, but Rose reminds her of how dangerous she can be for others and how she's not fit to be a mother. Rose convinces Fern to break up with Wally instead of telling him about the baby.

Fern has the baby who she named Willow, but is having misgivings about Rose. She leaves the hospital early to get away from Rose, but the police soon show up, take her baby away and admit her to a psych ward.

Eventually, things are cleared up, and it's revealed that the police are investigating Rose for the murder of their mother. Rose is diabetic and she gave their mother an overdose of insulin injections to kill her. (Rose did the same thing when they were kids, which is how their mother ended up brain damaged in the first place. Rose had been jealous that their mother preferred Fern.)

At the hospital, Owen shows up and tells Fern that he actually left Rose and that she's been making stuff about him because she's a narcissist. Wally also shows up and is happy to learn he's a father.

It's also revealed that the Billy incident was the result of Rose's manipulations. Rose was jealous that Billy liked Fern instead of her. Fern and Billy had been playing a game competing over who could hold their breath the longest, but Fern kept winning. Rose suggested to Fern that she hold him down so he could win and be happy. Fern researched how long would be safe, but Rose was the one watching the time and purposely had Fern hold him down for too long, and he died.

As it turns out, all of Rose's parts in the book are lies, which were written in order to establish a foundation to try to prove that Fern is incapable of being a mother and to incriminate her in the death of their mother. Fern is shown Rose's journal, and she sees how Rose has twisted all these situations around to paint herself as a victim. In reality, their mother was not cruel; Fern's memories are positive (but Rose was always telling her she just misunderstood situations). Also, Fern is not forgetful (Rose just makes things up and says that Fern forgot to make her think that).

By the end, Fern is happily raising her baby, Willow, with Wally. Fern is also learning that there are people other than Rose who are willing to take care of her and accommodate her.

As the book closes, Rose is now in prison awaiting trial for the murder of their mother. As requested by her psychiatrist, she writes out the truth of what really happened. However, then she tears it up and starts a new journal, one with more lies to implicate Fern. She plans to tell them that Fern asked her about how to administer insulin, that Fern always resented visiting their mother, and how Fern asked to borrow her bracelet (e.g. she's going to say that Fern pretended to be her when visiting their mother before her death) ...

The Good Sister by Sally Hepworth is a family drama slash mystery novel that’s narrated from the point of view of two twin sisters, Rose and Fern Castle, who were raised by an unstable mother.

When the book opens, they are both adults in their late twenties, and Rose is having difficulty conceiving a child. Meanwhile, Fern, who is on the spectrum, has recently met a new man.

The Good Sister is a moderately-paced, easy read that was a pleasant surprise for me. Hepworth wasn’t really on my radar, but I picked this one up because I’d come across a few other reviews of it recently.

The thing that makes The Good Sister stand out from most mystery-thrillers is that the story at the heart of it feels like a legitimate narrative separate from the mystery aspects of the novel. There’s an actual story arc that makes sense and feels satisfying, and it’s done in a way that’s fun to read.

I also loved that the characters in the book are for the most part not moping around. As much as I like the mystery genre, so many of them feature characters that are constantly drunk or depressed or extremely cynical or otherwise miserable. This book felt like a breath of fresh air, and it still had the mystery components I was hoping for.

I guessed what was going on about a few chapters in, though to be fair I read a lot of thrillers so perhaps that’s why. Still, by about a third of the way through the book, I would imagine that most readers will have guessed, since Hepworth hints pretty heavily at it.

In general, I think there’s a slight misalignment in some parts of the novel where you’re too aware of certain plot “reveals”, long before the characters in the book have sorted it out. When it comes to mystery novels, I prefer to be surprised by or to find stuff out roughly the same time as the characters — as opposed to knowing things and then sitting around waiting for the plot and the characters to catch up to you.

I didn’t think the book felt “slow” at all since I was enjoying the story, but I know a handful of others did, and I imagine it’s largely for this reason. Mostly, I think a little bit more tweaking on that aspect would have amped up the suspense and surprises in the book.

I liked Sally Hepworth’s writing style, and in The Good Sister there’s a compelling story, legitimate character arc and a satisfying end, at least in my opinion. Even though I did think that it gives up a little too much of its secrets a bit too early, overall I enjoyed the book quite a bit.

As a family drama especially, it succeeds. The family dynamics were complex and engaging, and I think the writing and story itself is above average for a mystery-thriller.

I liked it enough that I feel very likely that I’ll be revisiting Hepworth’s writing in the future. I’d recommend this book to mystery-thriller fans who also enjoy reading family dramas. Fans of Lisa Jewell (who also writes family drama-ish mysteries) should consider this book!

See The Good Sister on Amazon.

I listened to pretty much all of this on Audiobook. I thought it the narration was good. Mostly, I was able to forget that I was listening to an audiobook and just focus on the story, so for me that’s generally what I’m hoping for in an audiobook. Plus, this story is well-suited for audiobook, I think. It’s easy to follow and very listen-able story.

My one caveat is that the vast majority of it is narrated in a thick Australian accent (where the book is set), so I’d recommend giving the sample a listen to decide if you like that or not.

Hear a sample of The Good Sister audiobook on Libro.fm.

Read the first pages of The Good Sister 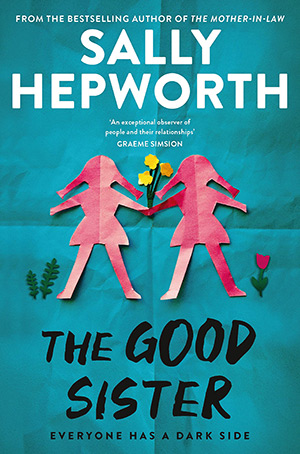 Fern Castle works in her local library. She has dinner with her twin sister Rose three nights a week. And she avoids crowds, bright lights and loud noises as much as possible. Fern has a carefully structured life and disrupting her routine can be...dangerous.

When Rose discovers that she cannot get pregnant, Fern sees her chance to pay her sister back for everything Rose has done for her. Fern can have a baby for Rose. She just needs to find a father. Simple.

Fern's mission will shake the foundations of the life she has carefully built for herself and stir up dark secrets from the past, in this quirky, rich and shocking story of what families keep hidden.