Book review and synopsis for The Family Upstairs by Lisa Jewell, a compelling mystery about a woman who inherits a house with a dark past.

In The Family Upstairs, Libby Jones inherits a multi-million-dollar mansion, where she had once been found as a 10-month-old baby. Along with it, she learns who her birth parents were, but also about their deaths in what investigators deemed to be a suicide pact as well as the two older siblings who went missing.

As Libby looks into the circumstances of their lives, deaths and disappearances, she risks uncovering dark secrets as her investigation leads her down a path of strange discoveries.

Meanwhile, in France, a musician living on the streets realizes that it's time for her to return to London to deal with things she once left behind.

In Part I, Libby Louise Jones turn 25 and inherits a London mansion from her birth parent's trust. She learns her birth parents were Henry and Martina Lamb. They died when she was a baby in what appeared to be a suicide pact. Libby' birth name is Serenity. She also had two older siblings (Henry Jr. and Lucy) who mysteriously disappeared. Libby, Miller Roe (a reporter who previously wrote about the story) and Dido (Libby's co-worker), begin to investigate. They find a man named Phin in the mansion.

Meanwhile, in France, Lucy is a musician with two young children, Stella and Marco. Lucy has to ask her abusive ex-husband (Michael Rimmer) for financial help and assistance arranging passports in order to go back to England. However, she ends up stabbing him and killing him after he attacks her. Additionally, via a series of flashbacks narrated by Henry (Jr.), we learn about the Lamb family. Martina allowed a semi-famous musician and her boyfriend (Birdie and Justin) to come live with them, who then invited the Thomasen family (David and Sally, plus their kids Phineas and Clemency) to stay. David began sleeping with Birdie. The Lambs squandered all their money, and David Thomasen began to dictating how everyone in the house lives.

In Part II, Lucy arrives in England. Meanwhile, Libby and Miller hang out with Phin, but suspect that he drugged them. More narration by Henry (Jr.) reveal that Henry (Sr.) eventually had a stroke. Afterwards, David went full-on cult, issuing oppressive rules for everybody. David also impregnated Martina, but Henry (Jr.) snuck herbs in her drinks/food to terminate the pregnancy.

In Part III, we learn that after Martina's miscarriage, David impregnated 13-year-old Lucy, resulting in baby Libby. In present day, Lucy finds Henry at the mansion (masquerading as Phin). (So, Libby and Miller are actually talking to Henry).

Meanwhile, Libby and Miller track down Sally, which leads them to Clem. Clem, Lucy and Henry tell them about that really happened. The kids tried to escape, but Henry's sleeping draught somehow killed all the adults, other than Birdie who awoke and had to be killed. Clem then ran off to find her mom. Afterwards, Lucy admitted to Henry that the baby is Phin's (so, Libby's parents are actually Phin and Lucy) and then took Phin to get medical attention (he's had an untreated illness for a while). The doctor took them in to care for them for a few days, and by the time Lucy returned, Henry was gone and the baby had been taken in by the police (Henry ended up starting a new life and doing well for himself.)

In Part IV, a year has passed. The house sells for 7.45 million pounds, split between Libby, Lucy and Henry. Lucy moves in with Henry, and keeps in touch with Clem. Libby and Miller are dating, and Miller announces that he's tracked down Phin. The book ends with Henry admitting (via narration) that Phin was sick because he was poisoning him (Henry was jealous that Phin didn't love him back), and feeling dizzy with anticipation at the thought of seeing him again.

I’m kicking off the new year (and new decade!) with a quick mystery novel from Lisa Jewell, The Family Upstairs, which was released in November 2019 in the U.S. Hope everyone had a fun and festive holiday season, with lots of yummy food and good books.

While the premise of The Family Upstairs seems like pretty standard mystery fare, I should warn you that this is sort of a weird story.

There’s a family that invites these other families to come live with them, a dude growing drugs at their house, a woman who is fiddler that’s busking on the streets and asking her abusive ex-husband for help, and a possible suicide pact/cult murder. None of this is implausible or that out there, but they’re a bit weird plot components. Whether or not it’s weird in a good or bad way probably depends on the reader.

That said, assuming you like the sound of it, I think the book is well-written and well-plotted. There are a number of “mystery” elements in the story. As the story proceeds, we slowly begin to unravel what exactly were the circumstances of Henry and Martina Lamb’s deaths. At the same time, there’s the question of what happened to the other kids in the house and what will happen when Libby is reunited with them.

I thought much of it was very well done. The mystery is compelling and paced evenly throughout the book. Jewell draws a compelling portrait of a family falling into the clutches of a conniving egomaniac. It’s not entirely satisfying, but is largely well-written and believable enough. I like that Jewell makes the effort to craft mystery novels that aren’t only centered around a handful of plot twists. Instead, she tries to offer her readers compelling stories that extend beyond that. But of course there’s some plot twists in there, too!

The parts with Libby and Miller investigating the story were probably my favorite parts, possibly because they’re the most normal/relate-able characters in the book. I guess I’m just basic like that, but either way, all the characters feel distinctive with unique personalities. I ended up enjoying this book a lot more than I initially thought I would.

I had lukewarm feelings going into book just because the plot didn’t particularly appeal to me. Cults, hippies, growing drugs, living on the streets, stuff like that is not really up my alley.

However, I think this is a highly subjective opinion, and there’s nothing objectively bad about any of it. In fact, after reading, my main thought was that the book is well-plotted and well-written as far as mysteries go. There’s a good cast of characters, an interesting plot, and Jewell has written a thriller that’s more than just some plot twists. Overall, I liked this book, even if the subject matter wasn’t to my tastes. The ending isn’t perfect (I was left with a few questions), but it’s not bad either.

I previously read The She Was Gone and was on the fence about Jewell, but after reading The Family Upstairs, I feel pretty sure I’ll be reading more of her work.

See The Family Upstairs on Amazon.

Read the first pages of The Family Upstairs 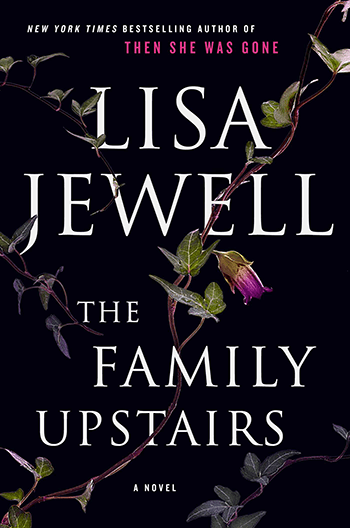 From the Publisher
Soon after her twenty-fifth birthday, Libby Jones returns home from work to find the letter she’s been waiting for her entire life. She rips it open with one driving thought: I am finally going to know who I am. She soon learns not only the identity of her birth parents, but also that she is the sole inheritor of their abandoned mansion on the banks of the Thames in London’s fashionable Chelsea neighborhood, worth millions. Everything in Libby’s life is about to change. But what she can’t possibly know is that others have been waiting for this day as well—and she is on a collision course to meet them. Twenty-five years ago, police were called to 16 Cheyne Walk with reports of a baby crying. When they arrived, they found a healthy ten-month-old happily cooing in her crib in the bedroom. Downstairs in the kitchen lay three dead bodies, all dressed in black, next to a hastily scrawled note. And the four other children reported to live at Cheyne Walk were gone.
Show More
Read an Excerpt
See it on Amazon Book Depository