Main / Books / Reminders of Him

Reminders of Him
(Review, Synopsis & Summary)

Book review and synopsis for Reminders of Him by Colleen Hoover, a tearjerker romance about a young woman who has been released from prison after a tragic accident and is fighting for custody of her daughter.

In Reminders of Him, Kenna Rowan is a 26-year-old woman who has recently been released from prison after causing the death of her boyfriend, Scotty, in a drunk driving accident five years earlier.

She returns to town in the hopes of regaining custody of her and Scotty's daughter who is being raised by Scotty's parents, the Landrys. However, the Landrys are still angry and heartbroken over the loss of their son. Meanwhile, Kenna ends up meeting Ledger, Scotty's best friend, who has been helping to raise her daughter.

In this emotional novel about redemption and forgiveness, Kenna must find a way to made amends and figure out what her life will look like moving forward.

Kenna has recently gotten out of prison for a drunk driving accident that caused the death of her boyfriend Scotty. She moves back to town to try to fight for custody of her daughter who is being raised by Scotty's parents, the Landrys. She accidently ends up getting to know Scotty's best friend (who she hadn't met before), Ledger, and they fall for each other.

The book eventually reveals that the night of the accident, Kenna and Scotty been driving on a country road in a convertible with the top down. After the crash, Kenna had believed Scotty was dead, but she later learned he'd been alive for hours. Kenna had been unable to find their cell phones, so she left the scene on foot to find help, but had been disoriented from her own injuries. She'd gotten home and passed out from a head wound.

Meanwhile, the Landrys are completely resistant to letting Kenna back into their lives. Before Ledger can tell them what's been going on, they find out Ledger has been secretly seeing Kenna and are furious. However, Ledger apologizes and shows them a letter that Kenna wrote about how much she loved Scotty and it explains that she didn't intentionally leave Scotty there to die like they'd previously believed. The Landrys finally agree to forgive Kenna and apologize for how they've treated her. Kenna is able to have a part in her daughter's life, and the book ends with Kenna and Ledger years later having a son, who they name Scotty.

Reminders of Him by Colleen Hoover was just published, and I know there’s been a lot of excitement among her fans around the release of her newest novel. (And it’s free on Kindle Unlimited if you have that subscription or want to sign up for a free trial.)

After reading Verity, I wasn’t sure if her books were really up my alley, but I’ve been in the mood for some romance lately, so I naturally Hoover’s latest release was on my radar. I also realized that Verity was more of dark romance (which is not really what I’m into), which is perhaps why I didn’t enjoy it. Reminds of Him sounded like it might be more of a tearjerker and perhaps a bit more hopeful, which I knew I’d be more likely to get on board with.

In Reminders of Him, Kenna has recently gotten out of prison for a drunk driving accident that resulted in her boyfriend Scotty’s death. After the accident, she’d learned she was pregnant and had gone to prison shortly afterwards. Now, five years later, she returns to town hoping to see her daughter, but she ends up hooking up with Scotty’s best friend who she hadn’t met before then.

The short version of this review is that this book is a good version of exactly the type of book it’s aiming to be. So, if you want a tearjerker-y romance, then you’ll probably really like it.

A longer version of this is to say that my overall impressions of this were generally positive. Crucially, I found the central romantic plotline in it to be sweet and convincing. I liked that there was a nice progression to their relationship which felt believable. It helps, too, that the writing and pacing are both solid, which is what you’d expect from a seasoned author like Hoover.

When I first read the premise, I was a little concerned that this book would be a bit of a downer, and I think it very easily could’ve become a semi-depressing story in the wrong hands. However, Hoover does a good job of managing the tone of the novel so that it feels emotional, but not too weighed down.

The male protagonist is sort of a generic romantic protagonist, but I liked that the main character of Kenna had a nice sense of personality which helped me to appreciate and root for their relationship. Kenna is described as someone with a unfortunate childhood, resulting in being someone in her younger years who wasn’t really “put together”, dressed somewhat provocatively and wasn’t the type of person parents wanted their son to bring home. I liked her imperfections, and it made the story feel a little more real to me.

I do have to say that I found this to be a pretty predictable story. Of course, for the genre that’s probably pretty standard. I imagine people who love this genre of books won’t mind it too much. If anything, perhaps some people find it comforting and will like that about it.

One thing I’ll note that drove me a little nuts as I was reading this is that she refers to the main character, Kenna, as a “girl” the whole time. Kenna is 26 and has a child, she’s a woman! Why do we need women to be “girls” to make them more attractive? It’s so creepy. Anyway.

Reminders of Him is a tearjerker-y, melodramatic romance novel and a good one at that. It’s an uncomplicated and somewhat predictable story, and it’s not literary or even semi-literary, so anyone hoping for something like that should unequivocally skip it. Instead, it’s a book that does a good job of being the type of book that it’s trying to be.

Most importantly for me, I found the central romance to be sweet and convincing. I will (very reluctantly) admit that I started tearing up at one point while reading this. I don’t know that I’d ever be a big romance reader, but to the extent the mood strikes, I’d say something like this is perfect for scratching that itch.

I think Colleen Hoover fans will love this book, and others who are wondering if they’d be someone who might enjoy her work should consider checking this out.

See Reminders of Him on Amazon.

Read the first pages of Reminders of Him 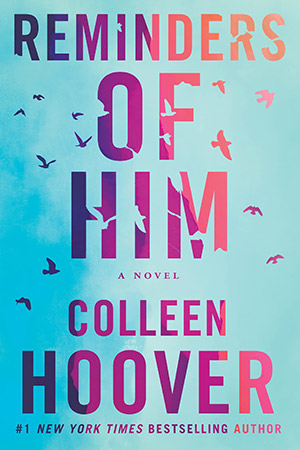 After serving five years in prison for a tragic mistake, Kenna Rowan returns to the town where it all went wrong, hoping to reunite with her four-year-old daughter. But the bridges Kenna burned are proving impossible to rebuild. Everyone in her daughter’s life is determined to shut Kenna out, no matter how hard she works to prove herself.

The only person who hasn’t closed the door on her completely is Ledger Ward, a local bar owner and one of the few remaining links to Kenna’s daughter. But if anyone were to discover how Ledger is slowly becoming an important part of Kenna’s life, both would risk losing the trust of everyone important to them.

The two form a connection despite the pressure surrounding them, but as their romance grows, so does the risk. Kenna must find a way to absolve the mistakes of her past in order to build a future out of hope and healing.