Book review and synopsis for Verity by Colleen Hoover, a thriller-slash-romance novel about a write who is offered a dream job.

In Verity, Lowen Ashleigh is a writer who's offered the opportunity to complete the last three novels of a bestselling book series because the author, Verity Crawford, is unable to do so for medical reasons.

When Lowen moves into the Crawford house to go over Verity's notes, Lowen sees that Verity has been left largely unresponsive after a car accident. She also learns that Verity's two twin daughters died in the months preceding Verity's accident.

Lowen soon finds her self attracted to Jeremy, Verity's husband, and she also discovers an autobiographical manuscript by Verity, which contains dark secrets about Verity's life.

Lowen Ashleigh is offered a job completing the last three novels of a popular book series. The original author, Verity Crawford, was in an accident a short while ago and is now alive, but unresponsive. The accident happened soon after the deaths of Verity's two twin daughters.

Lowen moves into the Crawford house to go over Verity's notes, where Verity is being cared for by her nurse, April. Verity's husband, Jeremy, and young son Crew also live there. Lowen quickly finds herself attracted to and falling for Jeremy. Strange occurrences also make Lowen suspect that Verity is faking her medical condition.

Lowen starts to read Verity's book series called The Noble Virtues, which are all written from an antagonist's point of view. In Verity's office, Lowen also discovers an autobiographical manuscript that Verity wrote that reveals Verity's dark nature.

In the manuscript, Verity describes resenting her daughters because Jeremy loves them more than her. Verity also admits to loving one of her daughters (Chastin) more than the other (Harper), and she has a dream that Harper will someday kill Chastin.

When Chastin is 8, she ends up dead from her peanut allergy. Chastin and Harper had been at a sleepover together when it happened. Verity then admits to murdering Harper six months later. She purposely took Crew and Harper out on a canoe, caused it to capsize and then only saved Crew.

Lowen is initially unsure whether to tell Jeremy about the manuscript, knowing it will only hurt him more. By now, she and Jeremy are sleeping together, and discussing a possible future together. However, when Lowen thinks she sees Verity move, she tells Jeremy in order to protect him and Crew.

Jeremy confronts Verity who finally admits to faking it. Jeremy then attacks Verity, and Lowen at first tells him to stop, but then she advises him to make it look like an accident. Verity is killed.

Months later, Lowen is pregnant and they are all living in a new house. The old house is due to be sold off. As they clean out the last of the stuff, Lowen discovers a letter that Verity wrote after her accident.

The letter describes how Verity wrote the manuscript as a writing exercise to practice her antagonistic point of view that she uses for her novels. She also writes about how Jeremy knew about the manuscript and had forced her into the "accident" because of it.

Afterwards, Lowen destroys the letter. However, the book ends with her being unsure as to whether the letter was true or just another manipulation from Verity.

Verity by Colleen Hoover was published a few years ago, but has continued to be pretty popular since then. Hoover is primarily known for her romance and YA novels, but Verity is more of a thriller-mystery romance.

In Verity, Lowen Ashley is a writer who is hired to write the last three novels in a bestselling book series because the author, Verity Crawford, is unable to do so herself. However, in the process of looking over Verity’s notes about the books, Lowen discovers an autobiographical manuscript written by Verity that reveals dark secrets about Verity’s life.

Reading this book, I wouldn’t have guessed that Hoover was someone who doesn’t typically write thrillers. It’s dark and graphic and very suspenseful. She definitely nails the thriller atmosphere and the page-turner pacing.

I also thought the major plot twist in it was fairly clever, though I don’t want to spoil anything about it here (see the Spoiler-ish Thoughts section for details). However, the ending seems a little implausible and relies on characters acting in contrived ways in order to make it work.

Also, this book isn’t as twisty as some mystery-thrillers. Instead, the romance aspect of it takes precedence for much of it, with our protagonist falling for Verity’s husband, Jeremy Crawford.

It’s important to mention that this book is aggressively graphic when it comes to sex and there’s quite a bit of it. Like, a lot. This is by far the most graphic book I’ve ever read. Obviously, whether or not that something that interests you is highly subjective.

Honestly, if you like the idea of a mystery-thriller romance novel, then this book is probably a pretty solid iteration of that type of book, especially if you are someone who would enjoy the creepy and suspenseful atmosphere of the book.

I went into Verity knowing I probably wasn’t the right reader for this book — I don’t really like romance novels — and I thought it was better than I expected it to be. I don’t plan on revisiting this author simply because I’m just not all that interested in the types of books she writes, but I was happy to sate my curiosity.

Have you read Verity? What did you think? See Verity on Amazon.

Okay, let’s talk about the final twist. The whole time, I knew there was clearly something about either Lowen’s narration or Verity’s manuscript that was false, I just couldn’t figure out what it was or why.

When it’s finally revealed that Verity was going essentially a writing exercise, I though that was pretty clever, especially since Hoover makes a point to keep reminding us that Verity writes in the voice of an antagonist and how that’s such an important component of her books.

The one thing that didn’t make sense though was why Jeremy flips out when he re-reads that manuscript or why he wouldn’t mention to Lowen that he’d seen it before? Am I missing something here? Why does he bother pretending to read the manuscript instead of just saying that he’s already read it?

Also the whole thing with Verity faking a her medical condition just seems extremely unlikely. And it feels very contrived that over the course of many months she was never able to find an opportunity to tell Jeremy that the manuscript was just a writing exercise.

Read the first pages of Verity 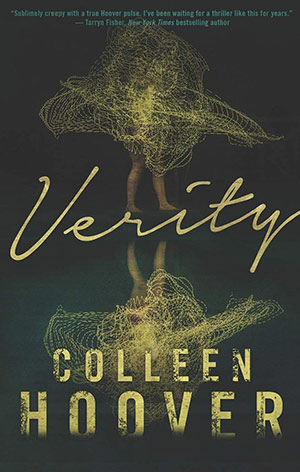 Lowen Ashleigh is a struggling writer on the brink of financial ruin when she accepts the job offer of a lifetime. Jeremy Crawford, husband of bestselling author Verity Crawford, has hired Lowen to complete the remaining books in a successful series his injured wife is unable to finish.

Lowen arrives at the Crawford home, ready to sort through years of Verity's notes and outlines, hoping to find enough material to get her started. What Lowen doesn't expect to uncover in the chaotic office is an unfinished autobiography Verity never intended for anyone to read. Page after page of bone-chilling admissions, including Verity's recollection of what really happened the day her daughter died.

Lowen decides to keep the manuscript hidden from Jeremy, knowing its contents would devastate the already grieving father. But as Lowen's feelings for Jeremy begin to intensify, she recognizes all the ways she could benefit if he were to read his wife's words. After all, no matter how devoted Jeremy is to his injured wife, a truth this horrifying would make it impossible for him to continue to love her.