One of Us is Next

Book review and synopsis for One of Us is Next by Karen McManus, a fun follow-up for mystery-thriller fans.

One of Us Is Next, the sequel to One of Us is Lying, takes us back to Bayview High. The students receive a group text about a game of "Truth or Dare" among the student population. Choosing "Truth" reveals a secret and choosing "Dare" presents a challenge.

Even as salacious secrets get revealed, the students can't help but enjoy the game and its ominous warnings to "always take the dare" ... until a (new) dead body is found in Bayview.

(By the way, if you need to catch up on the first book, see here for a full summary of One of Us is Lying (Book #1). That said, that this book, One of Us Is Next (Book #2), really does recaps anything you need to know from the previous book. So feel free to just jump into Book #2 even if your memory is fuzzy.)

In Part I, this book (Book #2) starts about eighteen months after the events of One Of Us Is Lying (Book #1). The students at Bayview High get a group text from an unknown number ("Unknown") about a new Game. Unknown will pick one person at a time for a round of "Truth or Dare". "Truth" means a secret about you is revealed to everyone. Dare is a challenge. No reply defaults to "Truth" (and the advice Unknown gives is to "always take the Dare.")

Phoebe (a junior) is selected as the first player. Her secret, that she slept with her older sister Emma's (a senior) boyfriend is soon revealed. Next, a "Dare" and then another happens. Then, Maeve (a junior) gets chosen. Her secret, that she dumped her best friend Knox because he couldn't get it up, is revealed. Things are quiet and then news breaks that Brandon, a kid who is a jock and kind of a jerk, has died from an accident at a construction site. Knox was there, too, but he was injured and doesn't remember what happened.

In Part II, Phoebe, Maeve and Knox try to figure out what happened. They eventually determine that Brandon's death was an accident that occurred during his "Dare". Nate (from Book #1) thinks it wasn't an accident, and that the construction site was engineered to harm Brandon. Phoebe also gets a message from a stranger asking to meet. Phoeve, Maeve, Louis (Maeve's love interest) and Knox go to scope out the stranger ("Intense Guy") and take down his license plate info. Separately, Knox thinks his parents know something about Brandon's death, so Maeve steals some files off his mother's computer. Maeve has also been tracking a forum on Reddit where someone involved in this game seems to be posting, and that person mentions Phoebe.

Meanwhile, the weekend of Eli and Ashton's wedding arrives (characters that met during Book #1). Eli is a lawyer that Knox interns for, and Eli has recently gotten some cops convicted in a high-profile case. Maeve and Knox are busy tailing Intense Guy's car and researching. They discover that Intense Guy is Jared Jackson, the younger brother of one of Eli's convicted cops, Ray Jackson. They also find out that Phoebe's father died many years ago because a forklist that Brandon Weber had been playing with (when he was 13) malfunctioned, killing Phoebe's dad. Brandon's parents got him off the hook.

Maeve and Knox tail Jared Jackson, who shows up and drops a bomb off at Eli's wedding. Maeve and Knox rush to move the bomb away, where it detonates without killing anyone. Afterwards, Emma's sister admits that she pretended to be Phoebe (Emma had already known about Phoebe sleeping with her ex and was angry) and made a revenge pact with Jared. Emma promised to help him get revenge (she didn't know Eli was the target), and Emma wanted Brandon to be injured (not killed). But as soon as the Game started, Emma backed out.

Then, Emma's lawyer shows her a chat log, and Emma and Phoebe know implicitly that their tech-savvy younger brother, Owen, must have re-engaged contact with Jared for fun (just playing the Truth or Dare game). However, when Brandon died, Owen stopped contacting Jared. The book ends with them both covering for Owen.

One of Us is Next (Book #2) by Karen McManus is a sequel to her 2017 young adult mystery-thriller novel, One of Us is Lying (Book #1). I had a fun time reading One of Us is Lying last year, so I knew I’d be picking up the follow-up when I had a chance. I’m glad to report that it didn’t disappoint.

Like it’s predecessor, One of Us is Next is a mystery-thriller that’s all about gossip and secrets among the student populace at Bayview High. This follow-up is very similar in tone and substance to the first book. If you liked the first one, you’ll probably like this one too.

I assume most people will have read the first book, so I’ll focus on the differences. The mystery component in One of Us is Next is actually a little weaker (less solidly constructed) than the first book. Without giving anything away, there are a couple of implausible aspects to it, while also being more easy to guess the ending. I’d say I saw most of the twists coming.

But it was a fun read nonetheless. I was surprised that I enjoyed the story in One of Us is Next more than its predecessor. You revisit pretty much all the main characters of the first book, but there’s also a fun assortment of side plots that exist outside the confines of high school, unlike the first book.

I was also pleasantly surprised by McManus’s inclusion of criticism of the criminal justice system, gender stereotypes and other real world concerns beyond high school stuff. There’s still fun things like who likes who, plenty of flirtation and some humor mixed in, too.

One of Us is Next is a worth successor to the very well-crafted One of Us is Lying. They are both fantastic examples of exactly what they’re intended to be, which is mystery-thriller novels geared toward a young adult audience. As with the first book, I think adult mystery-thriller fans could still appreciate and enjoy this book.

I would warn that One of Us is Next is a more mature novel than One of Us is Lying (in terms of the presence of things like sex and drinking), so maybe proceed with caution if you are planning on getting this for a younger reader.

See One of Us Is Next on Amazon.

Read the first pages of One of Us is Next

Book Review: One of Us Is Lying by Karen McManus
Book Review Books Fiction Mystery Thriller 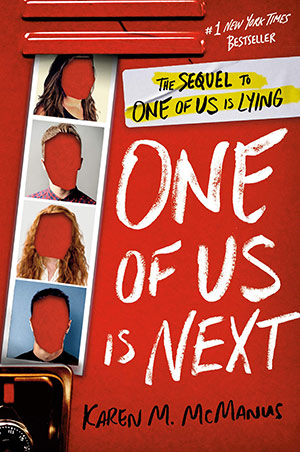 From the Publisher
A ton of copycat gossip apps have popped up since Simon died, but in the year since the Bayview four were cleared of his shocking death, no one's been able to fill the gossip void quite like he could. The problem is no one has the facts. Until now. This time it's not an app, though—it's a game. Truth or Dare. But by the time Knox is about to be tagged, things have gotten dangerous. The dares have become deadly, and if Maeve learned anything from Bronwyn last year, it's that they can't count on the police for help. Or protection. Simon's gone, but someone's determined to keep his legacy at Bayview High alive. And this time, there's a whole new set of rules.
Show More
Read an Excerpt
See it on Amazon
Share This
social & email
New Reviews
recent releases
New Posts
recently posted
Discussion and Replies